Motorcyclist Johanna Boni, who died in a horrific traffic accident yesterday morning, had an in­satiable thirst for adventure and wanted to travel the world, according to her boyfriend Daryl Cauchi. 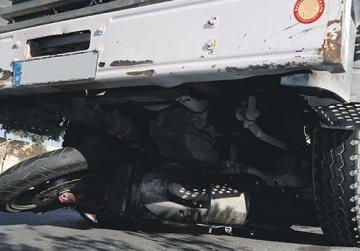 The scene of the accident in Labour Avenue yesterday. Photo: Darrin Zammit Lupi

The accident, the first traffic fatality this year, happened in Labour Avenue, Naxxar, at about 8am. Ms Boni, 27, was riding her Kawasaki ER6N to work when it crashed into a cement mixer driven by a 52-year-old man from Mosta. Police sources said that the extent of the injuries meant that they were not at first sure what gender the motorcyclist was.

Mr Cauchi told the Times of Malta that, although very shy at first, his girlfriend of three years could win anyone over with her smile.

“She had a lot of charisma and, even though she was very shy and kept to herself most of the time, she could get along with practically anyone once she got to know the person.”

Ms Boni was half-Maltese but grew up in Italy. She had always wanted to live in Malta and, after meeting Mr Cauchi, she decided to move here permanently. “We clicked from the start and she was courageous enough to leave her family to come live here with me,” he said.

We loved to travel; Johanna wanted to see the world

She enjoyed travelling and would regularly go on trips with Mr Cauchi, who described her as a thrill and adventure seeker.

“Our most recent adventure was in Turkey. We loved to travel; Johanna wanted to see the world. She was already planning her next trip abroad,” Mr Cauchi said.

Family was also very important to the motorcyclist and, although her parents lived abroad, Mr Cauchi said they were very close. She often referred to her mother as her best friend, he went on.

‘She was always willing to help’

In a Facebook post addressed to Ms Boni, Mr Cauchi said the day had started off just like any other, with his girlfriend kissing him goodbye before heading off to work.

“You were, and always will be, the best thing that ever happened to me. Never to be forgotten and never to be replaced,” he wrote.

Mr Cauchi also took the opportunity to share a few words of wisdom, urging those reading his post to “treat and cherish loved ones as if it’s your last moment together”.

“Don’t sacrifice so much to try and reach goals that are set far apart; it’s a gamble that’s not worth the risk,” he wrote.

Angel Camilleri, a good friend of Ms Boni, said that, while the two had only been friends for some six months, they had become inseparable.

“Since we worked together, we spent over eight hours a day together. But then we would often go home and continue talking.

“Johanna was a very quiet girl. She was mature, kind and always willing to help out, no matter what the problem was.”

Her positive attitude made her stand out, Ms Camilleri went on. “No matter what was going on in her life, no matter what problems she faced, she would always be positive. I really admired that about her.”

Last year, until September, there were two people killed in accidents involving motor­cyclists out of a total of eight traffic fatalities, while 71 people were injured grievously and 191 were slightly injured.

Data for the last quarter of the year is still being compiled by the National Statistics Office.