Vlogger Nuseir Yassin has made a bitter comment about partisanship in Malta, expressing his disappointment that his love-at-first-sight slogan about the island had been exploited by political activists.

Read: Vlogger upset by politicising of his #OhMyMalta slogan

Mr Yassin, whose one-minute Nas Daily videos are watched by millions every day, had came up with his #OhMyMalta slogan soon after he arrived on the island, but last week images of similar T-shirts were plastered across Facebook, with pro-Labour ones using it to show that Malta is going through its best period, and anti-Labour ones using the slogan to highlight corruption. 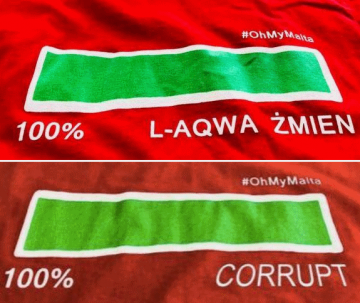 Nas Daily was not impressed to see the #OhMyMalta slogan he came up with used for political ends.

"I hate this," Mr Yassin had told the Times of Malta at the time. "They shouldn’t be copying my designs and shouldn't be politicising this.”

He had already commented on the partisanship in Malta during a Times Talk interview, expressing surprise at how politically divided Maltese were.

He has now followed that up with a bitter Facebook post, which is only visible in Malta, saying: "I have no idea what each party stands for, but I have a strong desire not to be associated with either.

"The sad truth is that in Malta your politics come before your humanity. So in the interest of keeping "Oh My Malta" clean, I don't want to involve it in politics.

In reality, "Oh My Malta" is not mine to dominate. It belongs to everybody. I just hope you use it to show the beauty of Malta and show its ugliness. It should work both ways. My only request is that you use it responsibly and NOT for political gain."

He also reacted sharply to criticism that his reaction to Malta had been so enthusiastic: "Some reporters called me "naive" for being so positive and thinking so highly of Malta. To those I say....

"Brother, I am Palestinian Israeli. I know a thing or two about war, division, politics, assassinations, marginalization, and death. It was my reality for 18 years.

"BUT I still deeply believe that divisions can be healed in Malta or Israel or as far away as here in Australia. I'm not naive or optimistic. I just deeply, genuinely feel that all division is temporary.

His note struck a chord with many locals, who in comments beneath the post thanked him for his honesty.

"You couldn't have said it any better," many were quick to tell the popular vlogger, who has more than six million followers.

"Thank you for your positivity," another wrote. "If being positive is naïve than I want to be naïve as well." 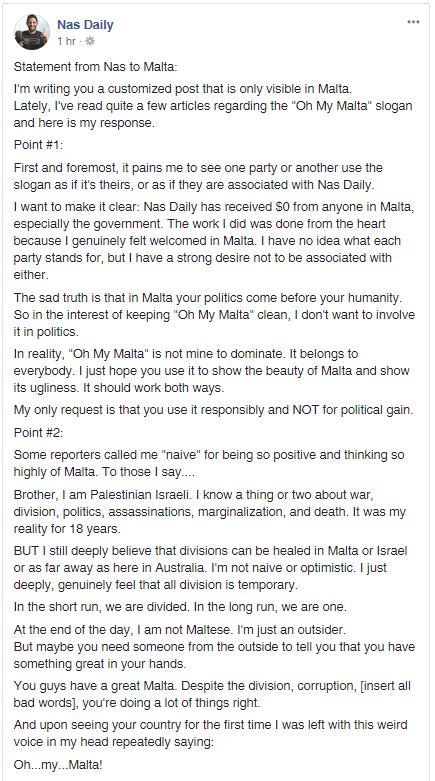