The University of Malta will not be able to employ new staff unless critically needed and some courses and initiatives may begin later than originally planned, after the government slashed its budget for the national university by more than 1%.

But Rector Alfred Vella has said that there will be no staff layoffs, reduced salaries or decreased learning resources for academics as a result of the cuts.

Lecturers must do their utmost to work with what they already have, he said, though he vehemently ruled out cutting costs on books, equipment and machinery, software and other learning resources.

Courses which have already been presented and opened up for enrollment will not be affected.

News of the budget cut was revealed by the PN earlier on Tuesday, after the party got wind of an email that Vella sent top academics.

In an email sent out on Tuesday, Vella told faculty deans, institute directors and heads of departments that the government would be slashing its funding to the university by €1.1 million this year, with the prospect of that reduced budget also applying for the 2023-24 academic year. 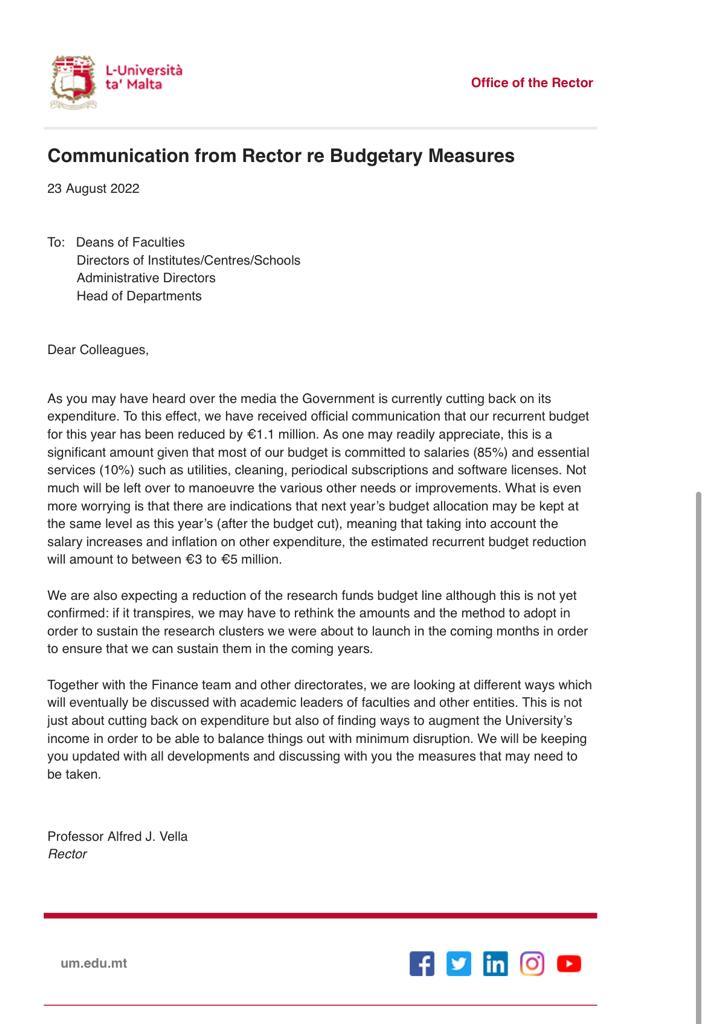 Vella sent this email to faculty deans, institute directors and heads of departments on Tuesday.

He urged them to cut back on expenditure as best as they could and urged them to join in an effort to increase profitable initiatives.

How big is the budget cut?

Speaking to Times of Malta after his email was leaked, Vella said the University's total annual budget hovers at around €120 million annually.

Roughly 20% (around €24 million) of that is profit that the University generates through student fees, evening program fees and consultancies among others.

The rest - around €96 million - comes from government funding, of which €1.1 million will be deducted from the next scholastic year.

This means the government cut amounts to 1.1% of its annual funding to the University of Malta.

Vella said, however, that the cut is still significant when considering that 85% of the University's entire budget goes to salaries and 10% goes to essential services.

"Not much will be left over to maneuver the various other needs and improvements," he told University staff.

"Taking into account the salary increases and inflation on other expenditure, the estimated recurrent budget reduction will amount to between €3 and €5 million."

This is because the salaries are bound to increase by collective agreements.

He also told staff that next year's budget might not budge and that they are expecting a reduction in research funding as well, although this is not confirmed yet.

This decision to slash the University's budget comes just months after the Labour Party pledged, as part of its 2022 election manifesto, to increase research funding to 2% of national GDP.

Malta regularly ranks among Europe's laggards when it comes to investment in R&D.

"We must increase profitable initiatives, at least by a little - at least enough to make up for the funding cut," Vella told Times of Malta.

"We also need to find ways to improve our services to attract and retain more foreign students. I'm not happy with the budget cut, but I know this will give us an opportunity to increase efficiency."

Earlier on Tuesday, Nationalist Party shadow minister Justin Schembri hit out at the government for its lack of commitment to the education sector, despite its propaganda slogan “Malta li rridu għal uliedna” (The Malta we want for our children).

He said the government's decision therefore effectively meant the university would have insufficient funding to adequately meet its needs.

Schembri pointed out that this was the same government that had spent €2 million on propaganda for the last budget and which had promised that education would be a priority.