13,275 COVID-19 jabs will be administered in Malta by Monday and the first healthcare workers will start receiving their second jabs on Sunday, Health Minister Chris Fearne has said.

Up to last Monday, Malta had received 26,550 doses, nearly all by Pfizer. On Pfizer's advice, half the supply was kept in the freezers for the second dose in three weeks' time while the first dose started being administered immediately. By next Monday, 13,275 people will have received their first jab, meaning that all doses (except those reserved for the second jab) will have been taken up. 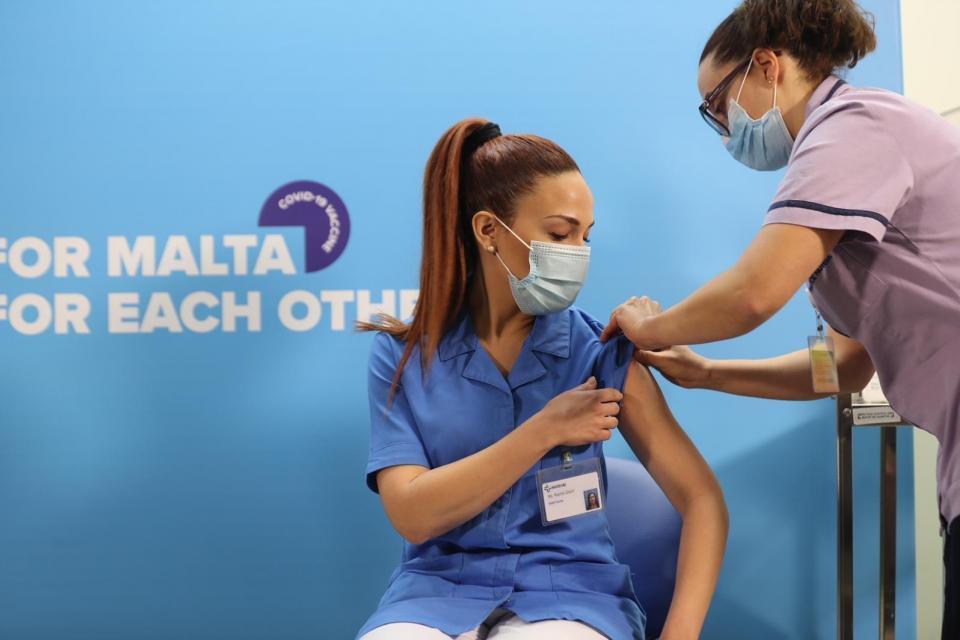 Nurse Rachel Grech received the first COVID-19 vaccine in Malta on December 27 and will get the second jab this Sunday.

Next Monday a consignment of 15,000 Pfizer doses will be received which, again, will be divided in two and administered within a week.

"We have the manpower, the logistics, the plans, the freezers...we are leaving nothing in the freezers except the second doses," Fearne said.

He pointed out that while the vaccination of health workers and residents in old people's homes is well under way, community vaccination had now also started for those over 85, with medical staff calling at people's homes where necessary.

While across the EU, 1% of the people have been vaccinated, Malta is doing far better, with 2.7% of the population receiving their first dose by Monday, Fearne said. Malta, he said, is leading in the EU along with Denmark.

The minister apologised to people who may be receiving invitations for their elderly relatives to be vaccinated, when they had already died, saying there had been no time to check the available lists.

All those aged 85, even those living in their own homes, will have been vaccinated by the end of this month. In mid-February the process continues for the police, CPD, environmental health officers and other front-liners as well as other elderly persons and those suffering chronic diseases.

People who do not receive an invitation for vaccination when their turn comes should phone 145 for information.

While the plan is for everyone to be invited to take the jab by the end of May, the process will be even faster if Malta gets sufficient supplies of another vaccine, by Astra Zeneca, the minister said. A million doses have been ordered by Malta but the vaccine has still to be approved by the European Medicines Agency and most initial production is going to the UK.

On the enforcement of COVID restrictions, Fearne said the main problem over the past weeks was gatherings in private homes and farmhouses. The authorities felt they should not go knocking on people's homes to see what they were doing in their own home, but he urged everyone to be responsible, especially during carnival weekend (although carnival has been cancelled). The biggest deterrent, he said, should not be the police, but the fact that otherwise healthy people were struggling to breathe in the hospital's ITU.

On new variants of COVID-19, Fearne said three cases of the more infectious variant first reported in the UK have been found in Malta. Another case has been found and it is not known whether this is the UK variant or what is known as the South African or Brazil variant.