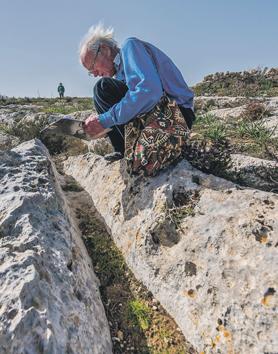 There were no flying geese pulling carts off the cliffs in Ċirkewwa and there is no Atlantis off Birzebugia, where ruts run underwater, archaeologist David Trump will explain at a lecture tonight, held after 57 years of studies on cart ruts in Malta.

But tonight, Dr Trump won’t only dispel humorous or wild ideas. He will also speak about a new discovery to do with the type of vehicle that could possibly have created the cart ruts, as he tries to answer controversial questions posed since Gian Frangisk Abela recorded the ruts phenomenon back in 1647.

For the past six decades Dr Trump has been trying to understand these grooves, which are found in many areas of exposed Maltese rock.

“Thinking about my experience of the Maltese cart ruts, the thing that strikes me most is that in these 57 years, I have added far more questions than answers,” Dr Trump said ahead of his lecture at Din l-Art Ħelwa at 6.30 pm this evening.

It will be Dr Trump’s first talk that is solely about cart ruts. He will be sharing some new ideas and possible solutions that he has come up with since 2008, when he published, with Daniel Cilia, Cart-Ruts and their Impact on the Maltese Landscape by Heritage Books.

The questions often raised about the cart ruts include whether they can ever be dated and what type of vehicles could have left the grooves. Why could they not be a system of water catchment? Why do others fly off cliffs or run underwater?

“In the past I jokingly suggested ‘flying geese pulling carts’, but obviously the answer is more down to earth. Since the ruts were made thousands of years ago, some Maltese cliffs, made of the unstable Upper Caroline Limestone, have collapsed, completely cutting off ruts that run along their edges.

“In fact at Ċirkewwa and Ras il-Pellegrin, off Ġnejna, one can trail where they cut off and where they continue along the same cliff face.”

Meanwhile, at Birzebugia, there are a pair of ruts at St George’s Bay that disappear underwater. 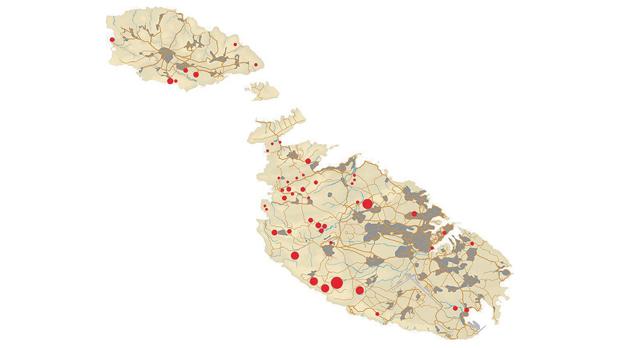 Concentration of cart ruts in Malta.

“Again, no Atlantis theories, as some have suggested. We know that in the last 3,000 years, the level of the seawater has risen. In fact right next to these ruts, there are a number of Bronze Age silo pits, some of which are now underwater.”

Could there have been any extra-terrestrial activity?

“I am obviously joking. Erich von Däniken, Swiss author of several books which make pseudoscientific claims about extraterrestrial influences on early human culture, theorised in his classic bestseller, Chariots of the Gods, published in 1968, that these ruts could only be made with alien influence.”

Dr Trump first set foot in Malta in 1954 to assist John Evans with excavations in Ġgantija and following a doctorate at the University of Cambridge, he spent five years as the curator of the Archaeology Museum in Malta.

Nowadays he travels back and forth and comes back whenever he gets the opportunity, providing advice where required. This time he is also here because next week the University of Malta is conferring on him the prestigious degree Honorary Doctor of Literature.

His talk at Caruana Curran Hall, 133, Melita Street, Valletta, will be accompanied by a photographic presentation from Daniel Cilia. The talk will be delivered in English and is free of charge.

Donations to Din l-Art Ħelwa’s restoration fund will be appreciated. More information on 2122 5952 or info@dinlarthelwa.org.