The turtle dove hunting season was closed on Saturday, more than two weeks ahead of schedule, as hunters reached the national quota of birds they are allowed to shoot down.

The Wild Birds Regulation Unit, which sets hunting rules, informed registered hunters that the national quota of 500 turtle doves had been reached over the weekend and therefore no more of the birds could legally be shot this season. 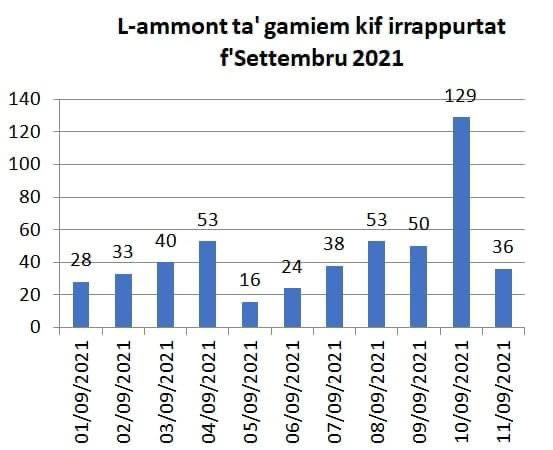 The figures for declared bird shootings this autumn season as announced by the authorities.

Turtle dove is considered a “near threatened” species across the EU as population numbers have been steadily decreasing since the 1980s.

Restrictions on hunting numbers followed a European Commission decision to heavily regulate autumn hunting of the vulnerable species by imposing a limitation on the number of birds member states can shoot.

Between 2013 and 2016, hunters in Malta declared shooting between 3,000 and 6,000 turtle doves during the autumn season. The figure of declared catches then suddenly dropped to between 100 and 200.

The dip in declared shootings came as hunters sought to convince the EU that a negligible number of birds were being shot on the island in autumn.

Conservationists have repeatedly raised doubts over the accuracy of hunters’ declaration in recent years.

In response to the European Commission's push to save the bird species, the Maltese government proposed reducing the hunting bag limit in autumn to 500 birds.

Birdlife have said that a European Commission decision to regulate hunting of the vulnerable species could shoot down hunters' hopes of being allowed to hunt turtle dove in spring.

Birdlife said that while the EU has acknowledged that a full ban is the only way to secure protection of the species, reductions of 50% that are calculated on declared catches in previous years will also be accepted.

The hunting federation FKNK on the other hand has said it will continue to work to reinstate “traditional socio-cultural turtle dove spring hunting and trapping”.

This, it said, is a right of Maltese and Gozitan hunters and trappers which was established by the European Court of Justice in 2009 and by a national referendum in 2015.