Scores of gaming and other ‘high risk’ businesses are being cut loose by Bank of Valletta, following instructions by the European Central Bank to “de-risk”.

The de-risking exercise began earlier this month, with the bank sending out letters to several corporate account holders informing them that they were no longer in a position to offer them banking services.

The companies have been given two months to make alternative arrangements before their accounts are closed.

“No extensions will be granted to this deadline,” the letters, seen by Times of Malta, read.

Why is BOV shutting down accounts?

Industry sources said BOV had singled out companies that exposed the bank more than the ECB was willing to accept.

De-risking is the practice of financial institutions exiting relationships with, and closing the accounts of, clients perceived to be “high risk”.

Rather than manage these risky clients, financial institutions opt to end the relationship altogether, consequently minimizing their own risk exposure.

A bank can deem a client a risk if it considers its likelihood of defaulting on its commitments unacceptable. 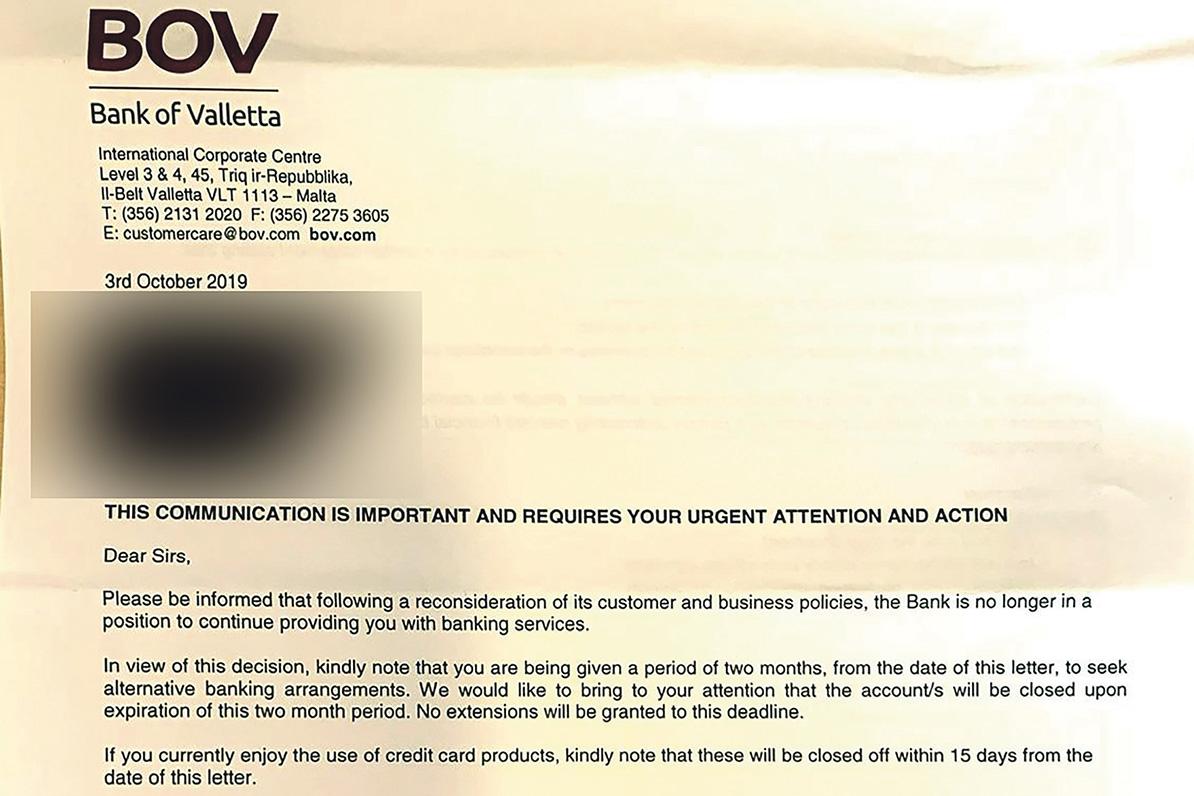 An extract from a letter sent out by BOV. Companies have been given two months to 'seek alternative banking arrangements'.

Contacted on Friday, BOV chief executive Mario Mallia told Times of Malta that the bank had come up with a new “risk profile”, in agreement with the ECB, which lays out how much risk the bank should operate under.

De-risking was ultimately healthy for the bank, he said.

Which companies are affected?

Industry insiders said BOV had targeted dozens of gaming companies that were not registered by the Malta Gaming Authority (MGA).

“These are deemed particularly risky as they have very high exposure but are not vetted by local regulators,” one senior source in the industry said.

Around 20 other companies that do have an MGA licence have also received similar termination letters from BOV.

A number of gaming affiliate companies, and agents of the controversial cash-for-passports scheme are also set for BOV’s chopping block, industry sources said.

It is understood many of these companies have relationships with other banks and would “survive” the closure, but the reality was tougher for those without another bank.

What do stakeholders say about the situation?

The CEO of one company that has been told his account will be closed said: “We have been clients of BOV's for years without any issue. Then we received this letter.”

The bank’s de-risking also means that it will be difficult for new companies seeking to open up shop in Malta to get hold of an account, and sources in the government said foreign direct investors were being discreetly directed to other banks on the island.

“This just looks bad for business. We appreciate that this had to happen from BOV’s point of view, but it is also problematic when we present Malta as a pro-business jurisdiction,” a government source admitted.

Back in June, The Sunday Times of Malta reported the contents of a leaked letter from the financial services watchdog that raised “serious concerns” about BOV’s operational and managerial processes, giving it a week to agree to implement a hefty overhaul including a de-risking plan.

Shortly after that report, the bank had said it was taking action to meet the reforms laid down by the ECB.

The letter had followed a review of the bank by the ECB back in March which had flagged around a dozen cases of “operational risk” at Malta’s biggest bank, four of which were deemed “critical”, Times of Malta was informed.

Meanwhile, sources said the criteria under which account closures were being undertaken remained unclear.

The timing of BOV’s move also spared no blushes for some of the island’s financial services bigwigs.

One admitted to being “ambushed” by investors and operators during this week’s Delta Summit, a conference that has grouped technology innovators from across the world.