The site at Abbatija tad-Dejr, perhaps one of the least known catacombs in Rabat, has been given a new lease on life through a community project, which is bearing fruit

Isn’t it amazing that just three steps down a stairway are enough to make you feel completely disconnected from the cacophonous rush of our everyday life and to find yourself cocooned in the silent darkness of a catacomb and a chapel where the clock seems to have stopped ticking ages ago? 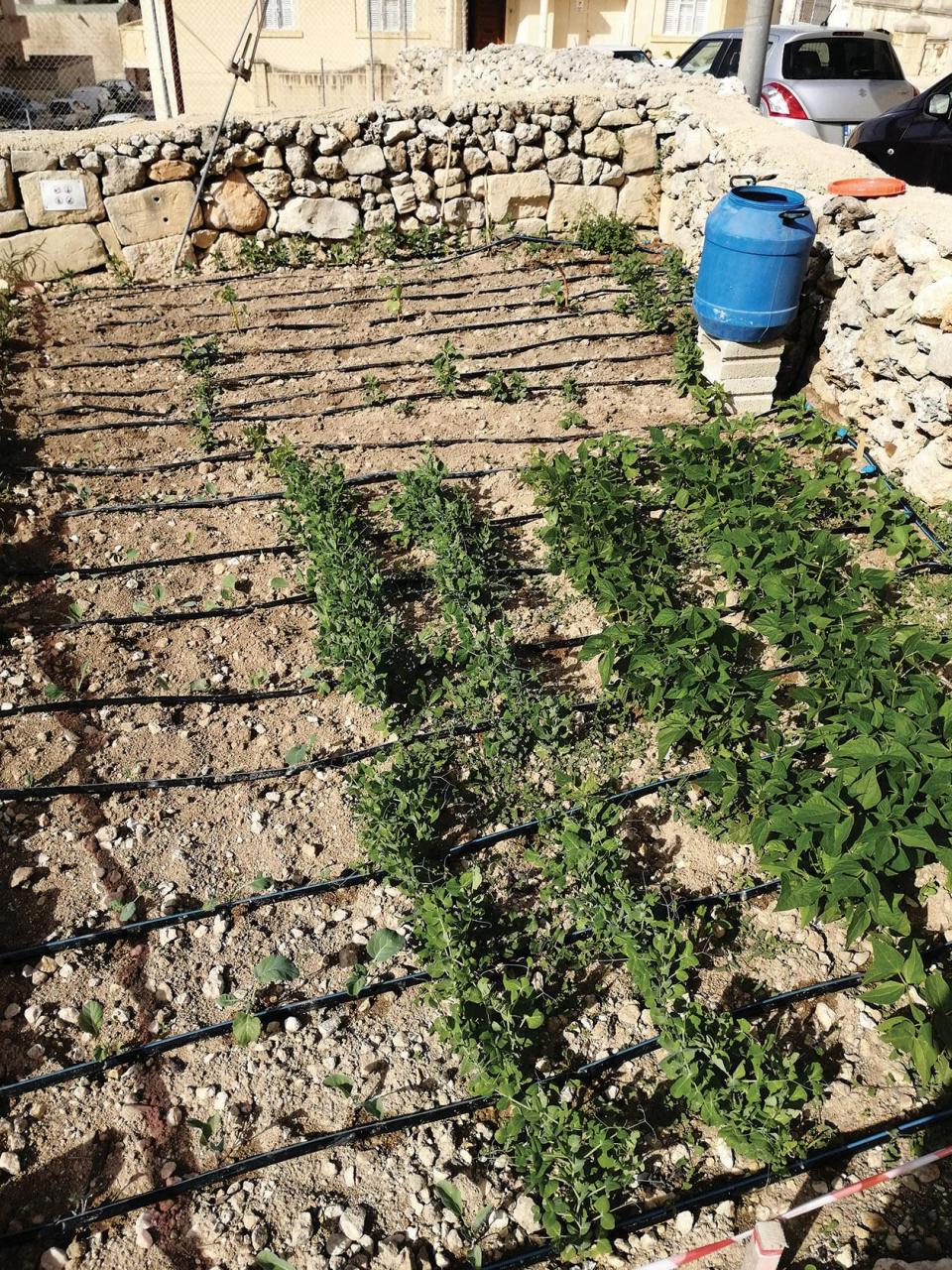 Crops growing in a part of the community garden.

This is the feeling you get as you set foot inside the cold hush of the Abbatija tad-Dejr catacombs in Rabat, and your eyes rest for the very first time on the arched entrance that once welcomed our forefathers on their voyage to eternal life.

Abbatija tad-Dejr is one of the historical sites under Heritage Malta’s wing, kept closed for conservation purposes and opened only by special request or for specific events.

Humble and unassuming, the site is partially hidden to the eyes of passers-by in this quiet area and many may not even have heard of it. Yet it houses some of the most notable catacombs on our islands and boasts a long history which reflects that of other catacombs in Rabat.

The site bears witness to the strong links between the Maltese cultural identity and Christianity, at a time when people buried their loved ones in subterranean catacombs instead of the methods we are accustomed to nowadays.

It was excavated first by Sir Temi Zammit between 1926 and 1927 and then, in 1933, by Sir Louis Upton Way. However, way before then, in 1647, historian Ġan Franġisk Abela had published a diagram of the main catacomb, giving a vivid description of the chapel, hermitage and tombs which he noticed at this site.

Abbatija tad-Dejr was first used as a Punic-Roman burial site. Later on, between the fourth and eighth century after Christ, at least four paleochristian catacombs were tunnelled next to each other in the rock face. The most important among them is the largest one, which is possibly one of the few local catacombs that entailed some sort of pre-planning during excavations. It is believed that this catacomb did not belong to a single family but to a group of wealthy families.

In fact, in this main catacomb, one may admire rows of carefully placed baldacchino (canopy shaped) tombs, considered to be the richest type of tombs in Maltese catacombs. Not only are they rich in style but also in decoration – the architectural motifs that used to decorate some of them include palm fronds and scallop shells, both associated with victory over death, as well as fish-scale carvings and other religious symbols.

There is no doubt that at the height of their use, the catacombs were also adorned with frescoes that are still partly visible. Abbatija tad-Dejr also houses one of the few inscriptions in local catacombs naming the persons buried within. 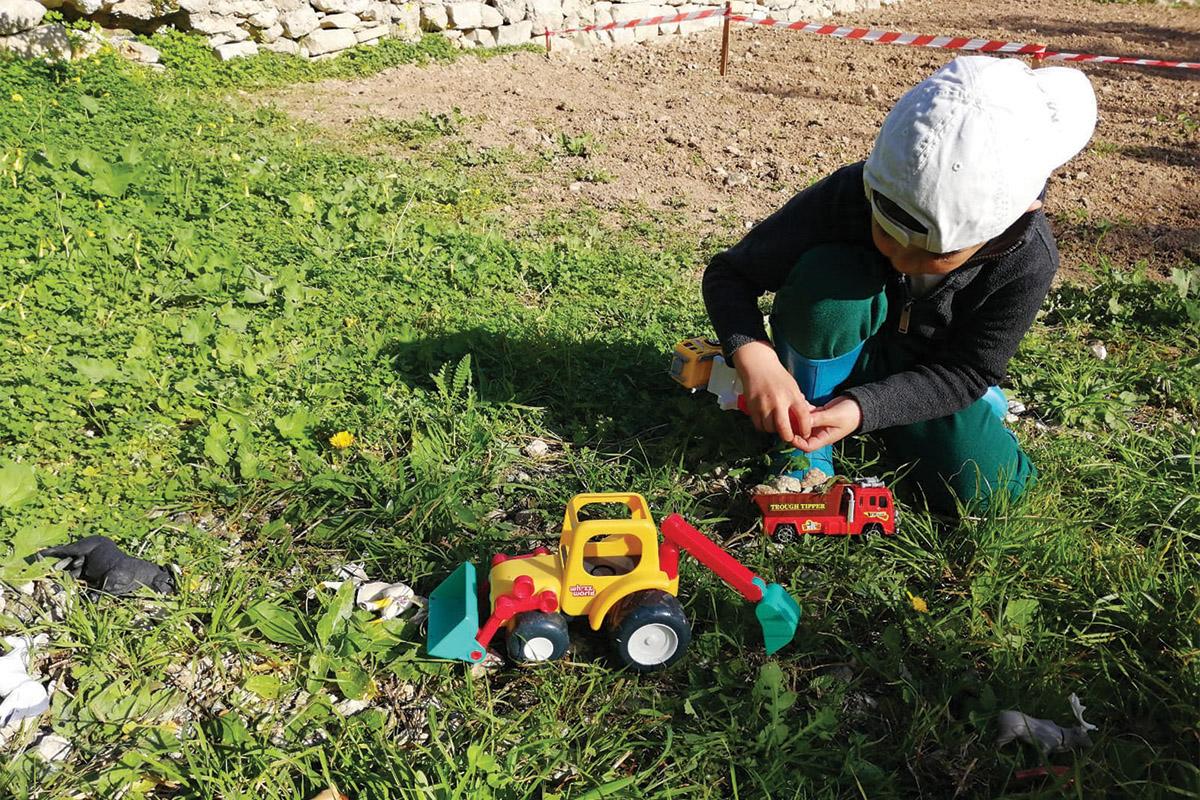 A child playing in the community garden above the catacombs.

The use of Abbatija tad-Dejr as a burial site probably came to a halt towards the eighth century after Christ, but an alternative purpose for it ensued years later. In fact, just off the rectangular antechamber at the site’s entrance, there is a tiny chapel dating back to the 11th or 12th century. In all probability this chapel was used by hermit monks who found an oasis of peace down in the catacombs, and who left their legacy in the name ‘Abbatija’, which means abbey.

The garden is split into 21 parts, under the care of 18 people

This delightful, cosy chapel takes on a deeper dimension if one bears in mind that the oldest representation of the crucifix in Malta was found in a niche carved in one of the chapel’s walls. The painting, possibly dating back to the 14th century, also shows the Virgin Mary and Archangel Gabriel on either side of the cross and is now exhibited at MUŻA.

Although Abbatija tad-Dejr is usually kept closed to the public, Heritage Malta has come up with an alternative way of bringing it closer to the community. This was achieved through the old public garden above the catacombs, which for years was in desperate need of repair and maintenance. The garden provided a perfect outreach opportunity for Heritage Malta, by splitting it into small parts and offering them as allotments to those who were interested in growing crops in the areas provided.

As David Cardona, senior curator for Phoenician, Roman and medieval sites within Heritage Malta, explains: “This was our way of giving back the garden to the community, while ensuring that the community is brought closer to the site itself and appreciates its long history.”

The idea turned out to be a huge success, so much so that what originally was a pilot project has now taken a more permanent shape with the renewal of the tenants’ contracts for the next couple of years. 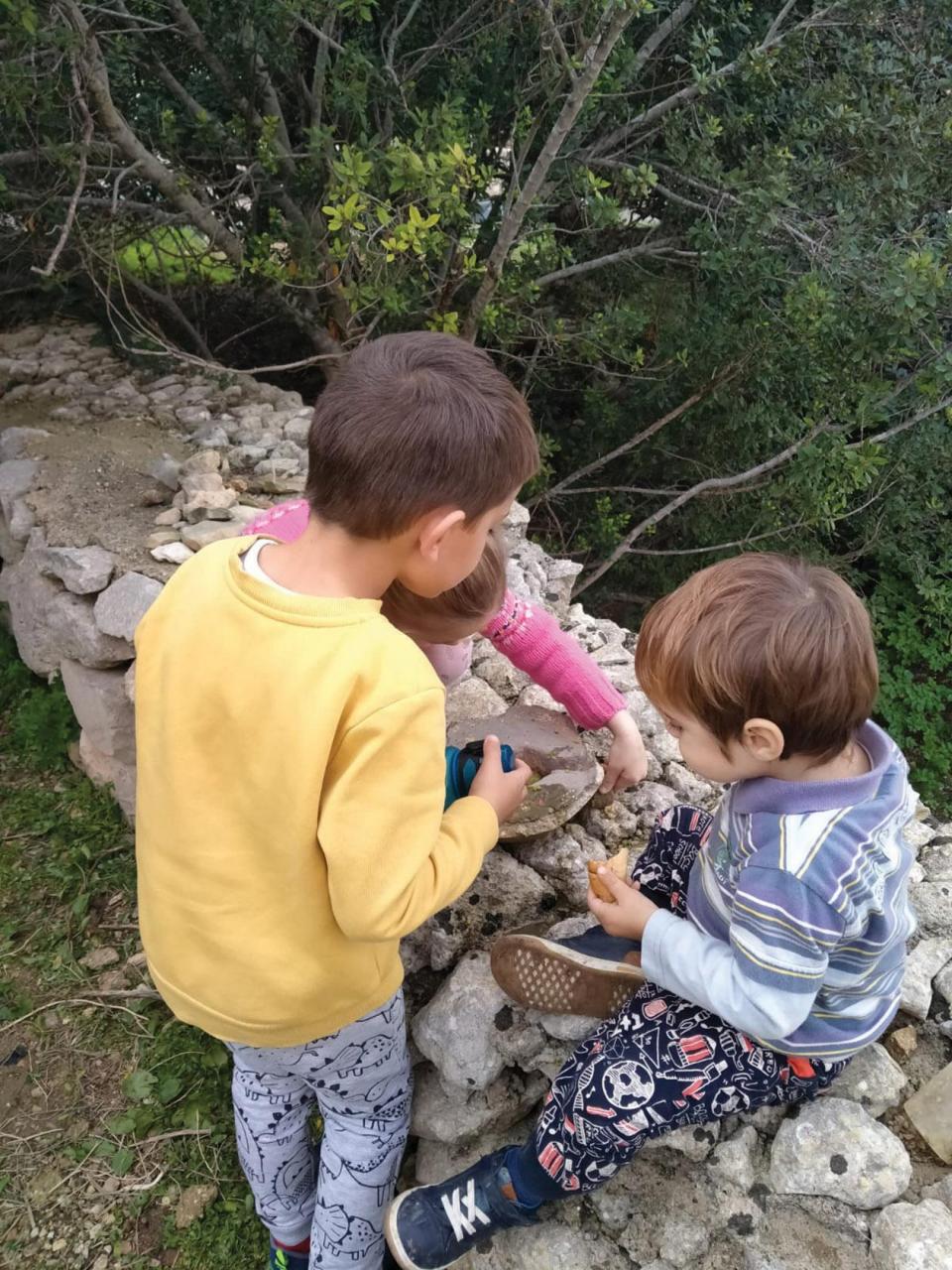 Children getting into contact with, and learning about, nature at the community garden at the Abbatija tad-Dejr site.

The garden is split into 21 parts, under the care of 18 people since some tenants have more than one allotment. The contracts bear no financial burden for the tenants, who simply have to work the land and abide by the rules – such as no ploughing, no building and no tree planting in certain areas so as to protect the catacombs beneath.

The garden is now beautiful to walk through, with all sorts of agricultural produce bearing witness to the tenants’ hard work and to the strong sense of community that this initiative has managed to create and sustain, notwithstanding the fact that nearly none of the tenants are from Rabat.

Charlotte Geronimi, one of the tenants at the Abbatija tad-Dejr community garden, feels that her whole family has benefitted from this experience.

“My son Luca has always dreamt of having a farm with sheep and horses! Living in an apartment with no garden has obviously made it difficult to grow our own crops,” Geronimi says.

“We were lucky to be given a sizeable plot at Abbatija tad-Dejr. The allotment was full of weeds and stones, making it difficult to work with, but we took up the challenge and after weeks of hard work, we were able to transform it into a workable plot that was suitable for growing crops.

“What originally started out as an opportunity to get my son closer to nature resulted in a very positive experience for all my family, my parents included.

“We may never have the opportunity of owning a farm with sheep and horses but through this initiative we have been able to grow a variety of crops, including carrots, lettuce, tomatoes, peas, broad beans, onions, garlic, cauliflower, broccoli and chard. I urge the authorities to expand on such initiatives so as to give other families a similar opportunity.” 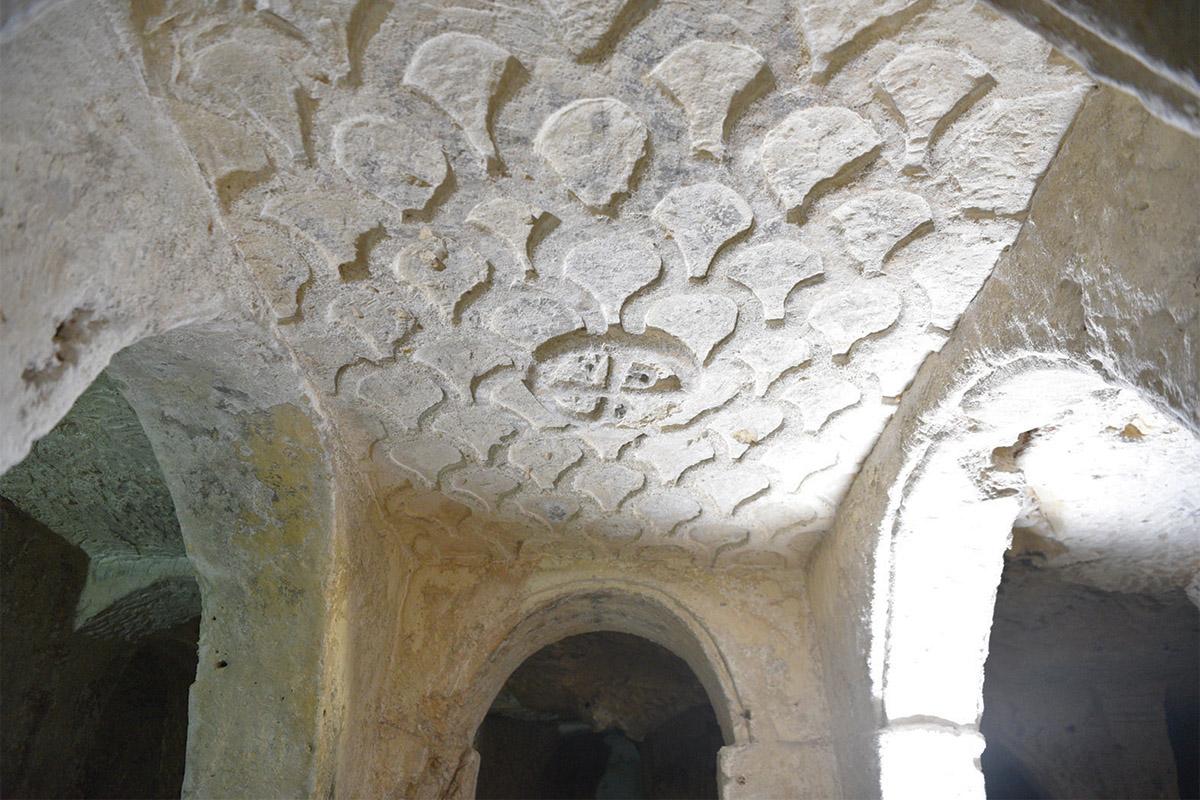 The site houses some of the most notable catacombs on our islands.

“We are a family of four, including a three-year-old and a six-year-old. Like many other families, every day we risk losing contact with nature and with the simple things in life. Sharing a community garden has been a good way for our children to learn where food comes from and that it is not only ‘something’ you can buy at the supermarket,” Bossini notes.

“Seeing a small seed growing and becoming a plant is a really important experience, teaching our children how nature works and how important our role is in this chain. It is also an introduction to environmental skills and teamwork skills. As tenants of the community garden, we have also had the opportunity to share our experience with our neighbours and with residents, increasing in this way the sense of community. Last but not least, the fact that the garden is on top of a very important catacomb complex is an opportunity for our children to learn about our history and its importance.”

Heritage Malta had planned to organise a special opening of the site in March, but the new COVID-19 mitigation measures have halted these plans. However, the public can access this medieval marvel through a virtual tour available on the agency’s Facebook page.