Chris Cardona has been told parliament cannot help him, after he asked for its protection following reports of an attempt to frame him for the murder of journalist Daphne Caruana Galizia.

In a letter sent to Speaker Anġlu Farrugia on Saturday morning, the self-suspended Economy Minister asked for “all necessary steps” to safeguard him and his constitutional function as an MP.

Dr Farrugia replied some hours later, telling him that there was nothing he could do as the reports of the attempted frame-up did not relate to events in parliament.

"While I understand your concern, because this is something I myself have experienced and continue to do so, I do not see how I can give you any form of remedy," the Speaker said in his reply.

On Friday, Times of Malta reported how the Cabinet had raised concerns that Keith Schembri and Yorgen Fenech had plotted to "frame" Dr Cardona for the assassination of the 53-year-old journalist.

Multiple Cabinet sources confirmed that a number of ministers told Prime Minister Joseph Muscat during a tense Cabinet meeting on Thursday night that they were concerned and “angered” that there appeared to have been an attempt to pin the assassination of Ms Caruana Galizia on Dr Cardona.

Mr Schembri denied he was involved in a frame up.

Dr Cardona and at least one member of his staff were briefly called in for questioning in relation to the murder probe last week.

In his letter, Dr Cardona says that contrary to other media reports on what had been said during the late-night Cabinet meeting, there was no denial to the Times of Malta report that ministers had spoken to investigators about a possible attempt to frame him.

“I believe that any attempt to prejudice and attack a member of Parliament’s constitutional function, requires strong and effective action, including from the House itself, the highest institution in the country,” his letter reads.

This is not the first time that the House has been asked to protect an MP.

Back in 2012, as the Gonzi administration was in a political crisis of its own, Speaker Michael Frendo had told Parliament that he had written to the Police Commissioner about reports of threats made to an MP and had asked the police to protect him.

At the time, the Speaker was replying to Anġlu Farrugia, who was Deputy Leader of the Labour Opposition, who had asked for the MP to be protected. 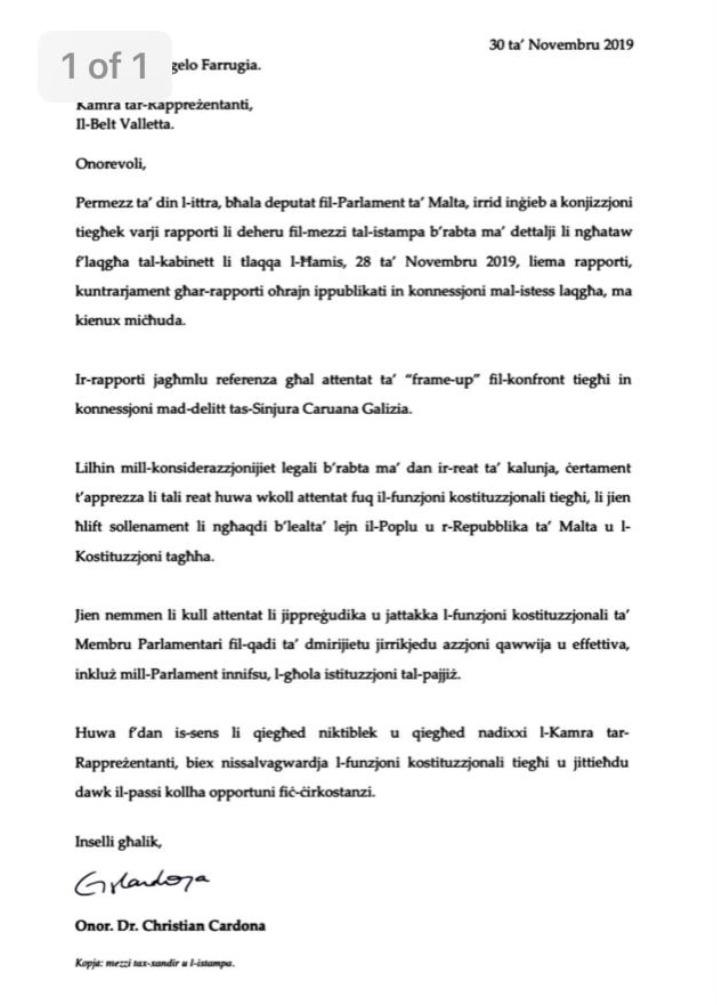