The number of coronavirus cases worldwide surged past 100,000 on Friday, as stock markets collapsed and the World Health Organization told all countries to make containment "their highest priority".

A rash of European countries as well as Cameroon, Togo and Peru confirmed their first cases of the virus while the Netherlands announced its first death.

The World Health Organization called the spread of the coronavirus "deeply concerning”. The WHO's recommendation is "that all countries make containment their highest priority”, the WHO’s director-general, Tedros Adhanom Ghebreyesus told reporters in Geneva.

With the elderly among the most at-risk groups, French President Emmanuel Macron urged people to limit visits to the old and infirm as much as possible to avoid further spread.

"The nation is behind our old... (but) during this epidemic and we need to limit our visits as much as we can," Macron said. There have been nine recorded virus deaths in France

Meanwhile, in Switzerland, the authorities urged the over-65s to avoid travelling at peak hours and banned meetings of more than 150 people.

In Washington, the coronavirus is getting a new name from US Secretary of State Mike Pompeo - the "Wuhan virus" - to the anger of China where the virus was first detected.

The Chinese government said it may soon lift the quarantine imposed on Hubei province, the epicentre of the coronavirus outbreak where some 56 million people have been effectively housebound since January. 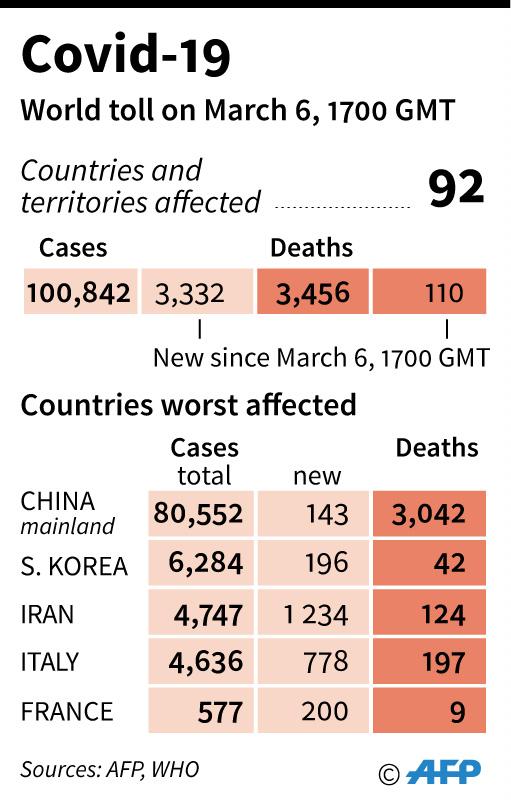 "The day everyone is waiting for will not be too far away," Ding Xiangyang, deputy secretary-general of China's State Council, told journalists.

The virus has now killed more than 3,450 people and infected more than 100,000 across 92 nations since the outbreak first emerged in China in December. Over 3,000 of those deaths have been in China.

Outside of China, Italy has registered the highest number of fatalities, with Friday marking it's largest daily toll of 49 virus deaths, bringing the total number to 197.

The Vatican, which is surrounded by Rome, reported its first coronavirus case and closed some offices to protect hundreds of the microstate's priests and residents.

Pope Francis told his 18.1 million Twitter followers he wished to "express again my closeness to those who are ill with the coronavirus and to healthcare workers who are caring for them".

The holy city of Bethlehem was in lockdown Friday after the first Palestinian cases of the deadly coronavirus were discovered there, leaving tourists scrambling to find a way out.

Meanwhile, in another measure to limit contagion during religious gatherings, Saudi Arabia emptied Islam's holiest site in Mecca to sterilise it.

Stock markets and oil prices collapsed as investors panicked over the expected devastating damage of the coronavirus to global economic growth, dealers said.

The Dow Jones Industrial Average was down 3.2 per cent by mid-morning 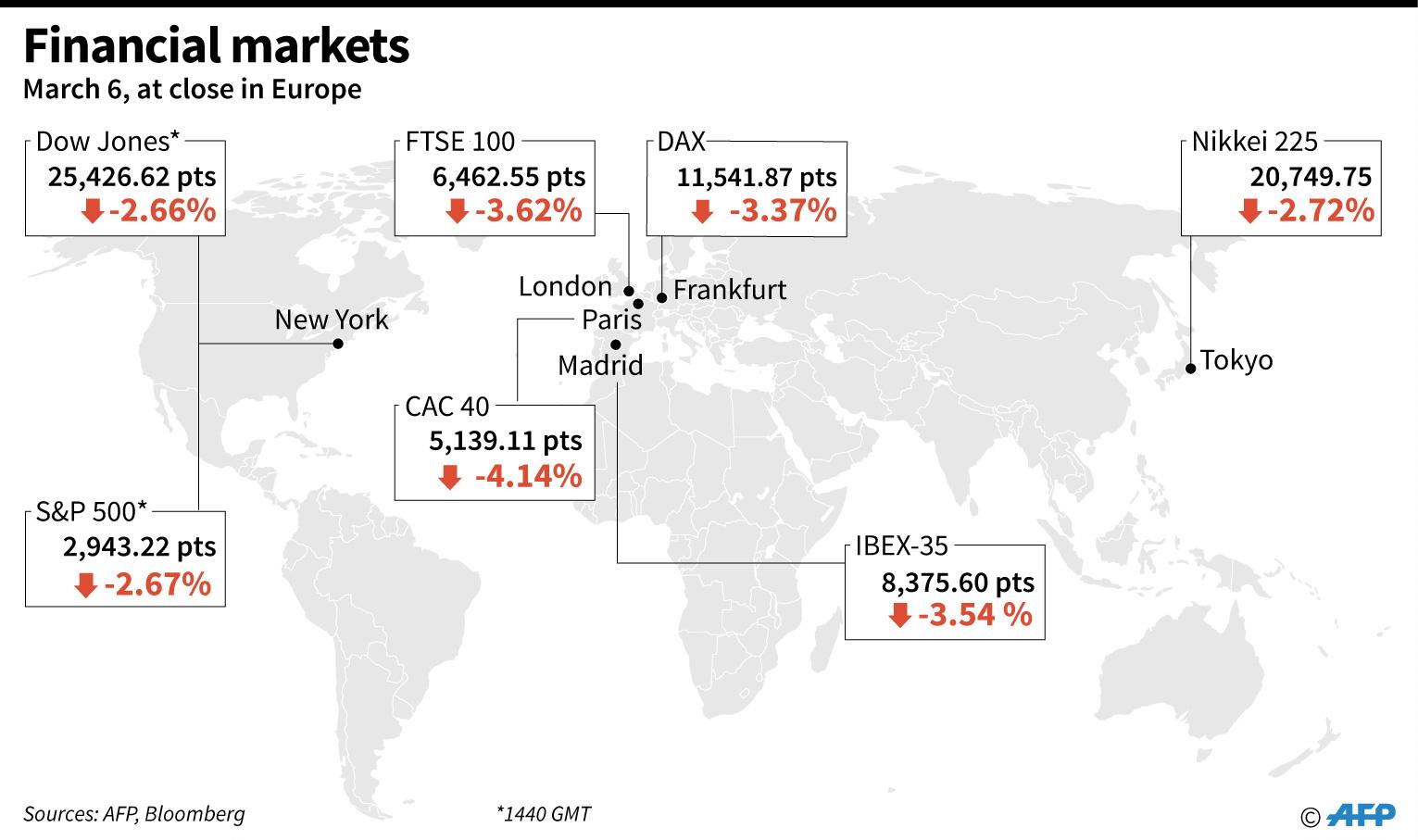 The tourist industry has been badly hit. The number of international tourist arrivals is expected to drop sharply this year due to the virus, the World Tourism Organization said Friday, reversing a previous forecast for a substantial increase.

German airline giant Lufthansa said it would slash capacity by half in the coming weeks, as the group battles "drastic declines in bookings" and cancellations.

Meanwhile, passengers and crew on a giant cruise ship being held off the coast of San Francisco were waiting on Friday for results of tests to determine if any of the 3,500 people on board have the new coronavirus.

In the United States, the largest nursing union said a survey of thousands of nurses at hospitals showed "truly disturbing" results.

The US Congress passed an emergency $8.3 billion spending bill to combat the coronavirus Thursday as cases surged and deaths reached 12.

But President Donald Trump has downplayed the risk, saying the WHO's report of a 3.4 per cent mortality rate was "false".

Slovakia, Serbia, the Vatican, Peru, Cameroon and Togo all reported their first cases on Friday while the Netherlands recorded its first death.

Cameroon is the first central African country to register a case of the deadly virus, and the fifth sub-Saharan nation.

Iran reported 17 new deaths taking the toll in the country to 124 while Egypt detected 12 new cases among workers aboard a Nile cruise boat heading from Aswan to Luxor.

A fifth person died from coronavirus in Spain on Friday as officials shuttered elderly care centres across Madrid.

In India, the world's biggest film industry called off its equivalent of the Oscars that had been set for the end of the month, with organisers citing the "sensitivity" of the health crisis.

South Korea has the biggest number of cases outside China, with over 6,000 infections and 42 deaths, prompting the country to extend school breaks by three weeks