Malta imposed restrictions on large events on Tuesday as a fifth Covid-19 coronavirus case was confirmed.

Prime Minister Robert Abela said there was no cause for alarm but outdoor events of more than 2,000 people and indoor events of 700 people were being banned. 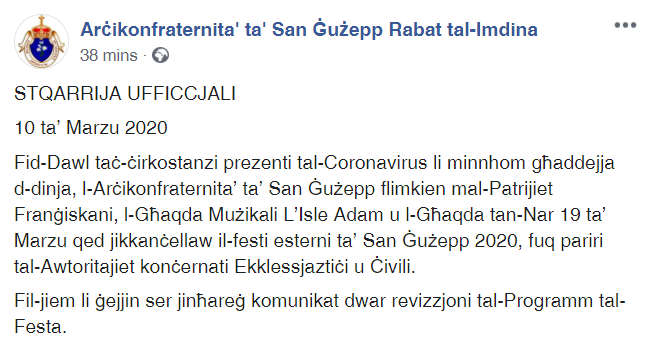 Also cancelled was the March 19 external feast of St Joseph of Rabat.

Senglea parish announced that a national pilgrimage with the statue of Christ the Redeemer has been transferred from March 20 to June 21.

What happens if virus spreads in the community

All the virus cases have been imported so far, but Health Minister Chris Fearne told Parliament that if there was a spread within the community in Malta new measures will be brought in.

Public transport will be reviewed and mass events will be restricted further, he told parliament.

He said the authorities are  preparing a further 180 beds, which will take the overall total of available beds in the worst-case scenario to around 300.

"God forbid we reach this stage," he said.

The fifth case, confirmed on Tuesday afternoon, is a 16-year-old girl, the daughter of a man confirmed as having coronavirus on Monday.

Father and daughter had been on a family trip to a ski resort at Trentino Alto Adige in Italy between February 23 and 27 and returned to Malta via Treviso.

The teenager did not return to school after coming back to Malta. A third person, the man's partner, tested negative to the virus.

The pair are receiving treatment at the Infectious Disease Unit of Mater Dei Hospital.

The other three cases, a 12-year-old girl and her parents, tested positive over the weekend and are also being treated at Mater Dei.

Malta stopped all travel between Italy and Malta on Monday night. Air Malta and Virtu' Ferries are however operating special trips to ferry passengers stranded in Italy or Malta.

Parliamentary Secretary Silvio Schembri, who is responsible for the airline, said arriving passengers will be asked to observe a two-week quarantine.

The Malta Employers' Association said it had not received feedback to proposals it made to the government.

It advised employers that all employees who have travelled or will travel to areas declared as high-risk zones by the health authorities should be obliged to spend a 14 day period under quarantine in the interests of co-workers.

Employers were urged not to accept at the workplace any persons who have travelled to high-risk areas to the workplace. If possible, workers should be asked to work from home.

The association said that unless employees had travelled on work-related business, the period of quarantine should not be paid by the employer, except where the employees worked from home.

Should employees display symptoms of the coronavirus, the period from when the symptoms appear will be regarded as sick leave, provided it is certified.