The two permits form part of a cluster of six development applications which, in turn, pertain to a larger project that has been split into four parts.

They were approved in January, a day after Times of Malta revealed that, according to Land Registry records, the applicants were not the “sole owner” of the site as they had declared.

A false declaration of ownership is an offence under criminal and planning laws, and could lead to a permit’s revocation.

A spokesperson for the appellants told Times of Malta that this false declaration had partly prompted the legal action, in the form of two applications seeking to revoke the permits.

The applications will be heard by the Planning Authority's executive council.

The action is also challenging the fact that although the sites where the permits were issued lie partially within an Outside Development Zone, the Planning Commission had processed and determined the applications as if they were all within the area permitted for development.

This was misleading and had a bearing on appeals, as the public and other stakeholders were more likely to appeal a permit if they knew parts of it were on ODZ land, the spokesperson added.

An aerial view of the Qala land earmarked for development. Video: Paul Buttigieg 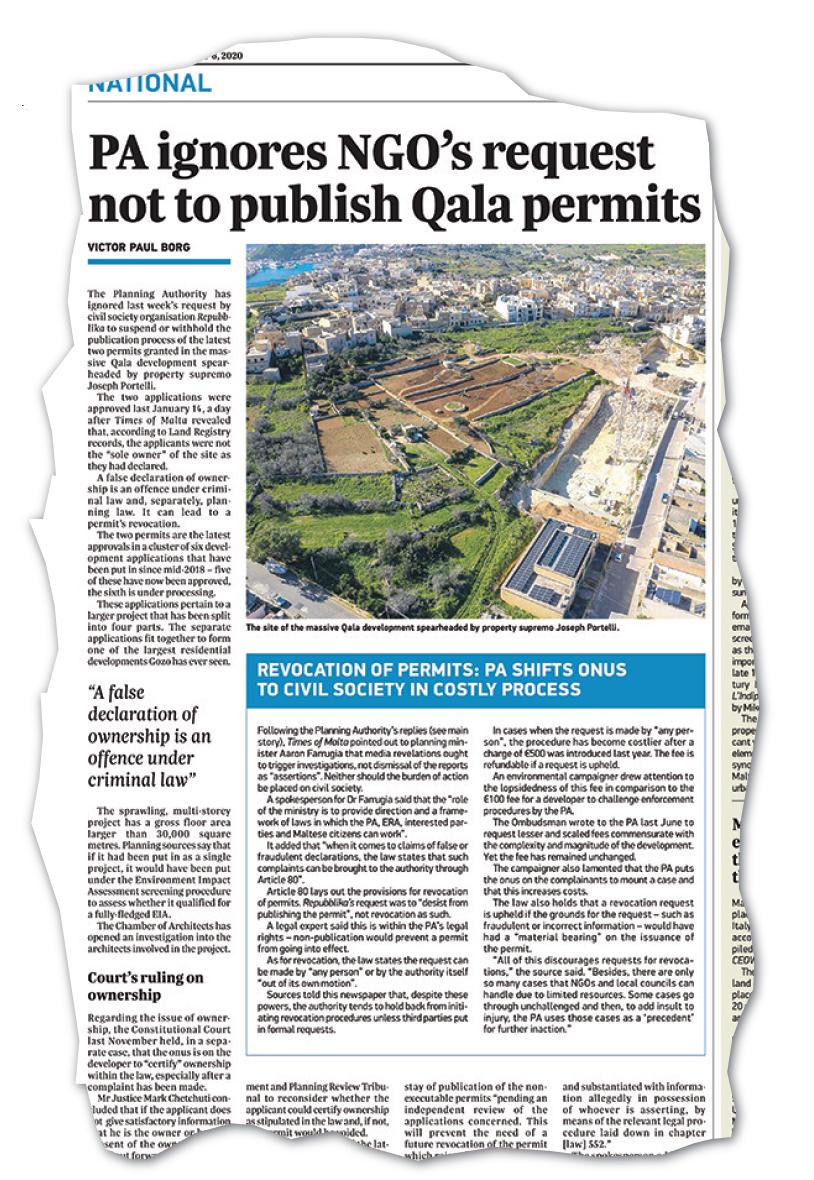 The report in The Times flagging the false declaration of ownership, on which the appeal is partly to be based.

Both applications were for the sanctioning of excavation for underground garages and supplanting the ground floor garages that had been approved with more flats.

In granting the permits, the commission has allowed the expansion of the overall project by another 14 apartments, bringing the total number of flats to 179 as well as a house. The whole development sprawls over an area larger than three football grounds.

When contacted, Qala mayor Paul Buttigieg said the council had already forked out €4,000 in legal expenses against this development.

This is only one of four developments that the local council is acting on, including the proposed Qala Creek at Ħondoq ir-Rummien, a case that has been going on for 18 years and which includes a yacht marina, hotel, villas, bungalows, apartments and shops.

“We have spent tens of thousands of euros in appeals to safeguard our well-being – as a mayor I want to safeguard the interests of residents, not speculators.

“That money should have been invested in infrastructure for the locality, and I believe that the authorities should help local councils financially in defending such abusive applications,” he said.

Buttigieg added that in recent years Qala has been “bombarded” with planning applications – there are more than 400 apartments being built there right now.