A daughter of one of Infrastructure Minister Ian Borg’s top advisers was handed a €62,400 contract by direct order to serve as a junior lawyer with the ministry – months before obtaining her warrant.

Jesmond Zammit’s daughter, Adreana Zammit, was awarded the lucrative contract on October 24, 2019. She graduated as a lawyer two months later and only received her warrant in January, according to her own social media posts.

Zammit was then awarded an additional direct order in August last year for a “legal consultation agreement” that lasted six months and netted the junior lawyer another €46,142.

By the end of 2020, just one year after graduating, Zammit was paid at least €108,542 in direct orders for her legal services.

Junior lawyers who spoke to Times of Malta said they could expect to earn between €20,000 and €25,000 a year just after graduating.

According to a ministry spokesperson, Zammit was “first given a work placement with Transport Malta as a student, an opportunity provided to various students” between July 3, 2018 and September 30, 2019.

Adreana Zammit proved herself during her work placement and was later given a contract as a junior lawyer, which was then extended to a contract for services of a legal consultant on a three-year period until May 3, 2023, the ministry spokesperson said.

“It is important to note that Transport Malta doesn’t employ any legal consultants,” the spokesperson added, referring to a question about how many such legal consultants the ministry employs in total and how many were engaged via similar direct orders. 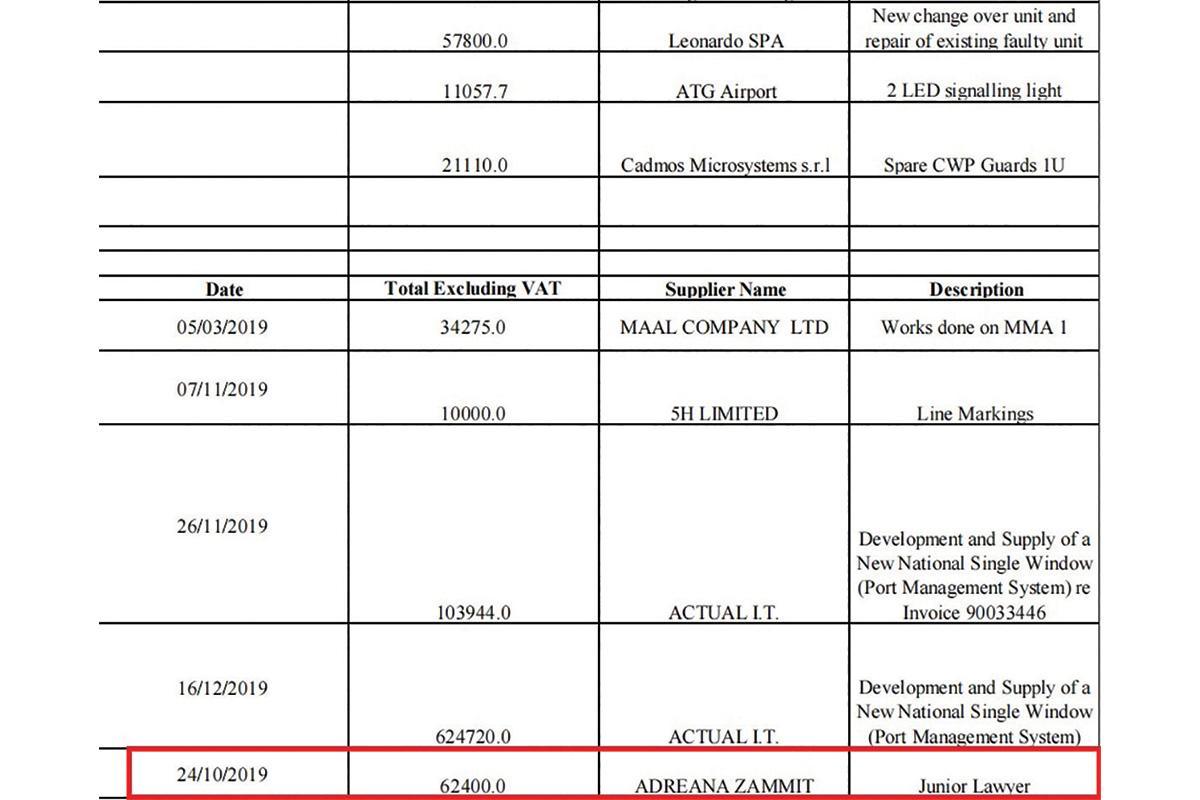 The direct order was issued months before Zammit received her warrant.

The spokesperson, however, failed to answer questions about why Zammit’s contract as a junior lawyer was issued before her warrant was in hand.

The ministry also failed to respond to queries about whether it believes there was a conflict of interest in hiring a junior lawyer on such a contract when she is directly related to one of the minister’s closest advisers.

Questioned outside parliament on Monday, Prime Minister Robert Abela said that he wanted to "establish all the facts" before commenting or acting further in the case.

Jesmond Zammit was Ian Borg’s head of secretariat back when the infrastructure minister was serving as parliamentary secretary for EU funds.

The contract, one of hundreds issued by the ministry from 2018 to 2020, was revealed following a parliamentary question from opposition MP Toni Bezzina.

Bezzina said that “the issuance of direct orders should be an exception, not standard practice”.

“This is nothing but abuse of taxpayer money to the tune of millions of euros of direct orders for works that could have easily been done through a public call,” he argued.

“This is a problem that is symptomatic of the Labour government, which instead of ensuring that our country gets the best possible service for the best possible price, wastes millions in direct orders to people close to it,” he added.

Bezzina was last week questioned by police over allegations of corruption dating back to 2012 and has described the claims as a political frame-up.

Times of Malta approached Zammit for a comment, but she did not respond at the time of going to press.

Cassola said the abuse was aggravated by the fact that Zammit was the daughter of the minister's advisor.

"Three things need to be investigated: 1. Fraud - by employing a person as a lawyer when she was still a student; 2. Nepotism and favouritism as she is the daughter of a person who is politically and personally close to the minister and 3. Why direct order?" he said.

In a Facebook post, Nationalist MP and lawyer Jason Azzopardi said the abuse in public funds appeared to be a breach of the criminal code.

Correction April 19: A previous version stated that a lawyer's entry-level salary was around €40,000, citing a salary comparison website.  It is significantly lower than that.