Diego Maradona was football's archetypal troubled genius, a world-beating player whose life and career scaled the most dazzling heights but also plumbed the darkest depths.

Maradona, who died Wednesday at the age of 60, became a global icon after leading Argentina to the 1986 World Cup but he was not a squeaky clean idol like Pele, and made little attempt to hide his fiery personality and many vices.

"I am black or white, I'll never be grey in my life," he once said.

Maradona was short, powerful and quick. He was also a ferocious and astute competitor who refused to be intimidated even though many opponents tried. Above all, he was sublimely and imaginatively skilful.

"No ball ever had a better experience than when it was at his left foot," said his Argentina teammate Jorge Valdano.

However, while Maradona is remembered for his masterly composure on the ball, he was also famous for his frequent lack of control both on the field and off. He struggled with addiction, notably to cocaine, and with his weight. 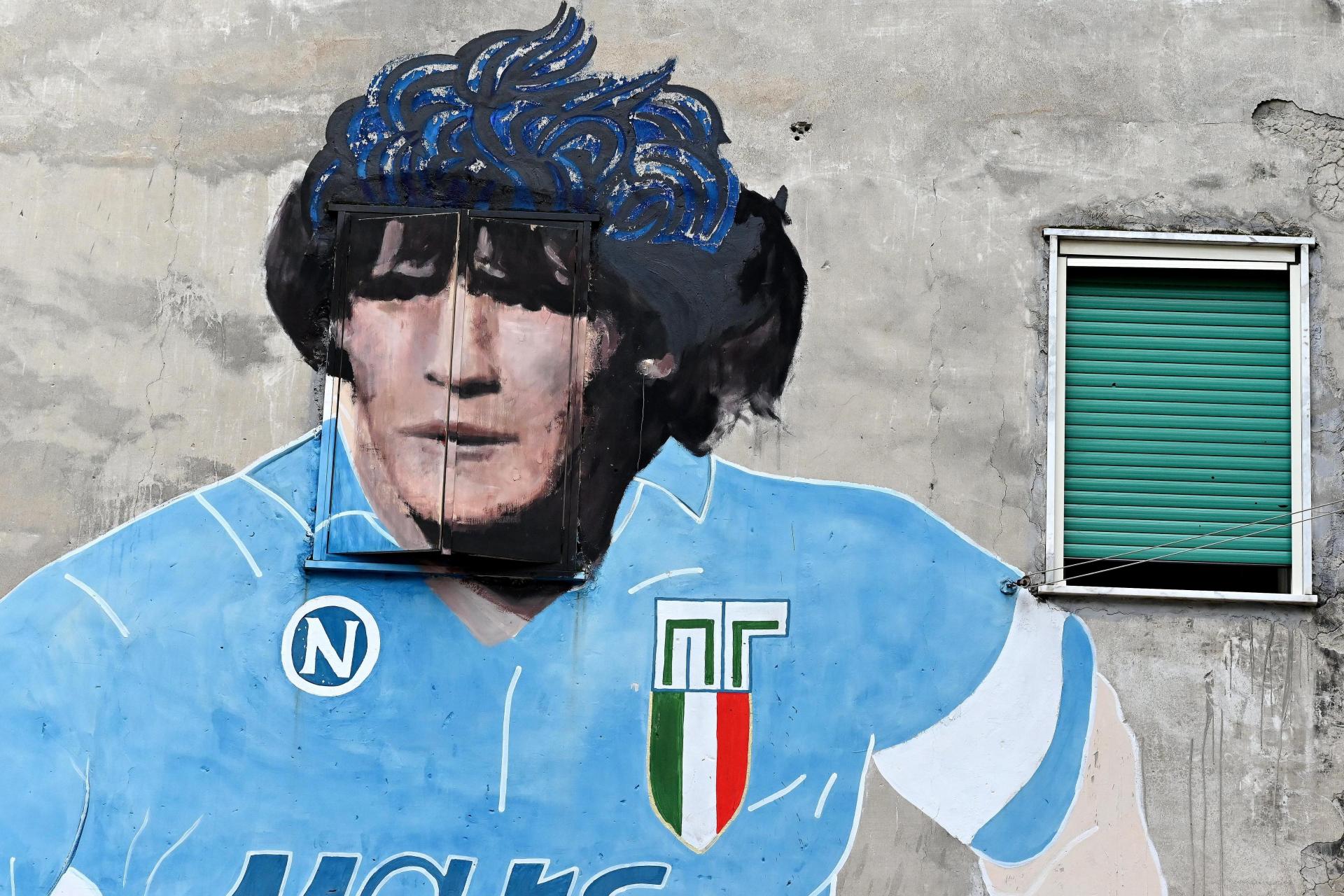 A mural of Maradona in the Italian city of Naples, where he spent his best years as a club player. Photo: AFP

Diego Armando Maradona was born on October 30, 1960, in Lanus, just outside Buenos Aires, and grew up in one of the poorest areas of the Argentine capital.

His career is defined by the World Cup, the four he played in and the one he missed.

"I have two dreams," Maradona told Argentine television at the age of 17. "My first dream is to play in the World Cup. And the second dream is to win it." 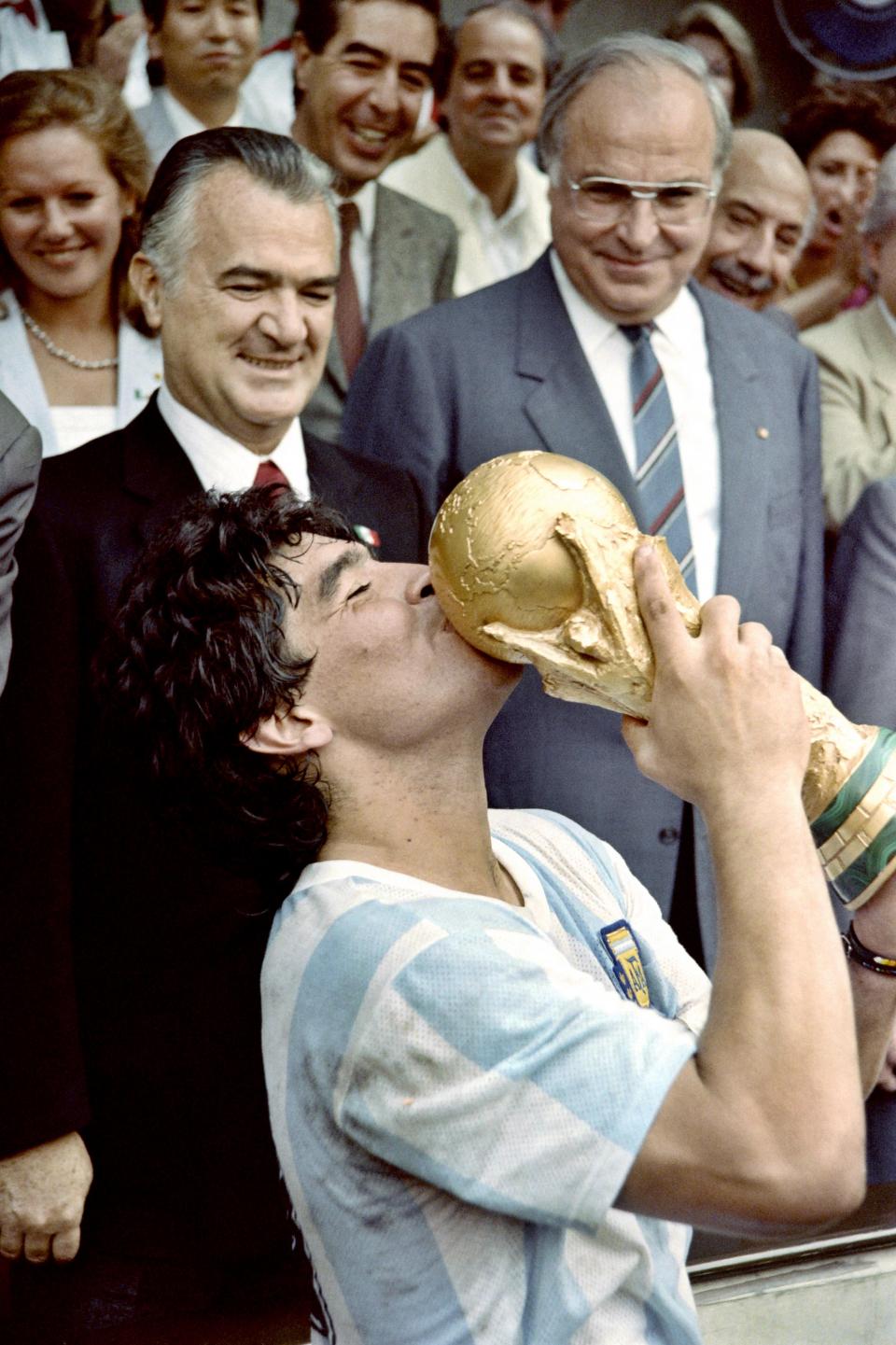 Maradona kisses the 1986 World Cup: the victory was arguably the pinnacle of his footballing career. Photo: AFP

Manager Cesar Luis Menotti omitted "El Pibe de Oro" (the golden kid) from his squad in 1978. Argentina, the hosts, went on to win the competition for the first time.

The following year, under Menotti, Maradona led Argentina to victory in the under-20 World Cup in Japan, winning the Golden Ball for the tournament's best player.

His senior World Cup debut in 1982 in Spain went badly. Maradona was treated brutally by defenders and ended his tournament with a red card for retaliation as Argentina, already eliminated, lost to Brazil.

He atoned four years later, propelling his country to victory in Mexico and making the tournament his own.

In the final, Maradona set up the 86th-minute winner against West Germany. He scored twice in the semi-final against Belgium, beating four defenders for the second. 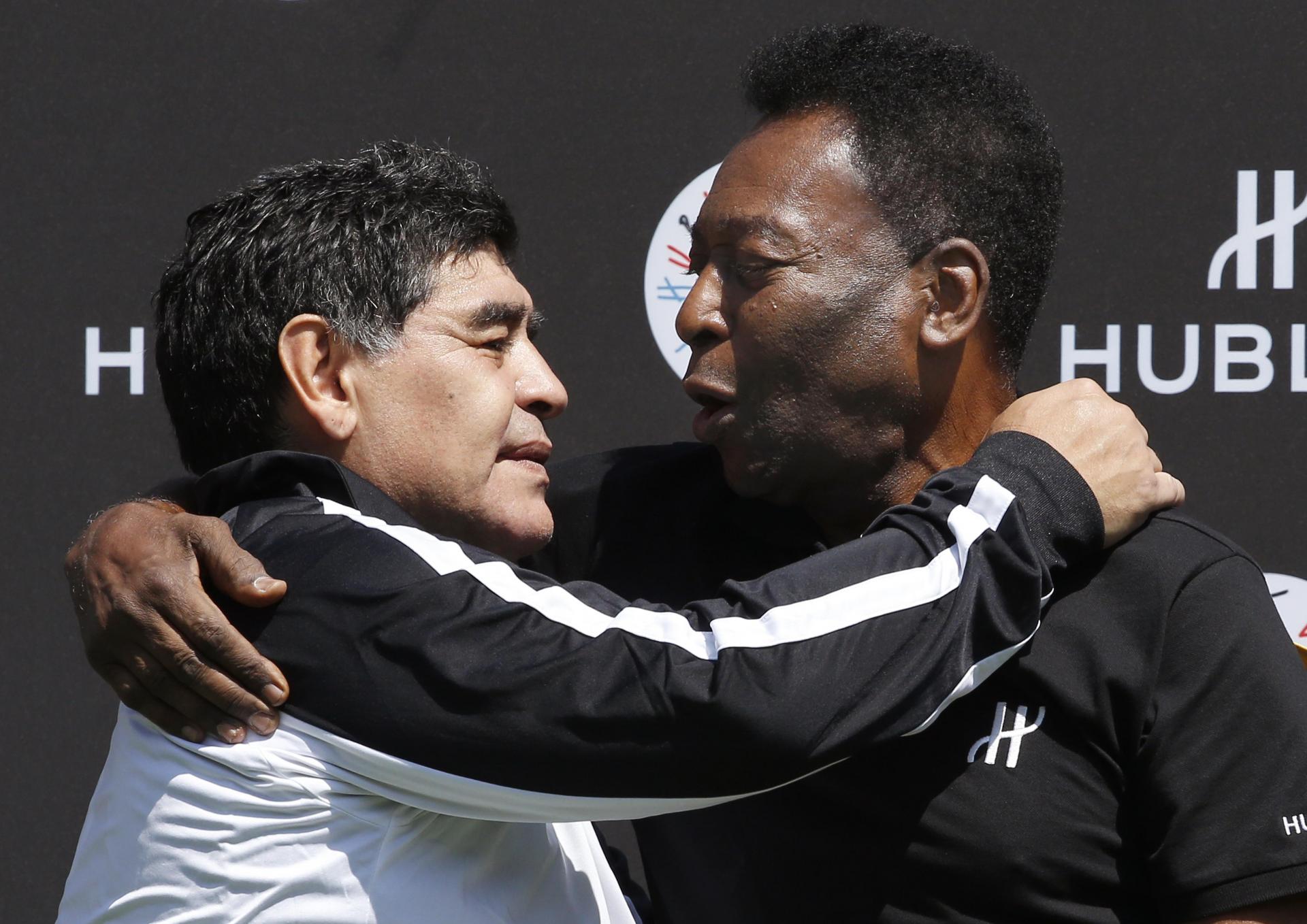 Maradona and Pele embrace: the two are considered to be the best footballers of all time. Photo: AFP

But the match that defined his tournament, and possibly his international career, was the 2-1 quarter-final win over England, in which he scored two goals that will be remembered forever -- for very different reasons.

In the 51st minute, as Peter Shilton reached to catch the ball, Maradona, some seven inches shorter, jumped alongside him and with a deftness that fooled the eye, flicked the ball through the England goalkeeper's arms and into the net.

Four minutes later, Maradona picked up the ball in his own half, beat six England players, including Shilton, before squeezing home. FIFA later named it the "Goal of the Century".

In 1990 in Italy, almost immobile because of an injury to his much-kicked left ankle, Maradona steered a defensive and limited Argentine team back to the final even though they won just two games and scored only five goals.

In a dire final, it took Andreas Brehme's 85th-minute penalty for West Germany to this time get the better of Maradona. 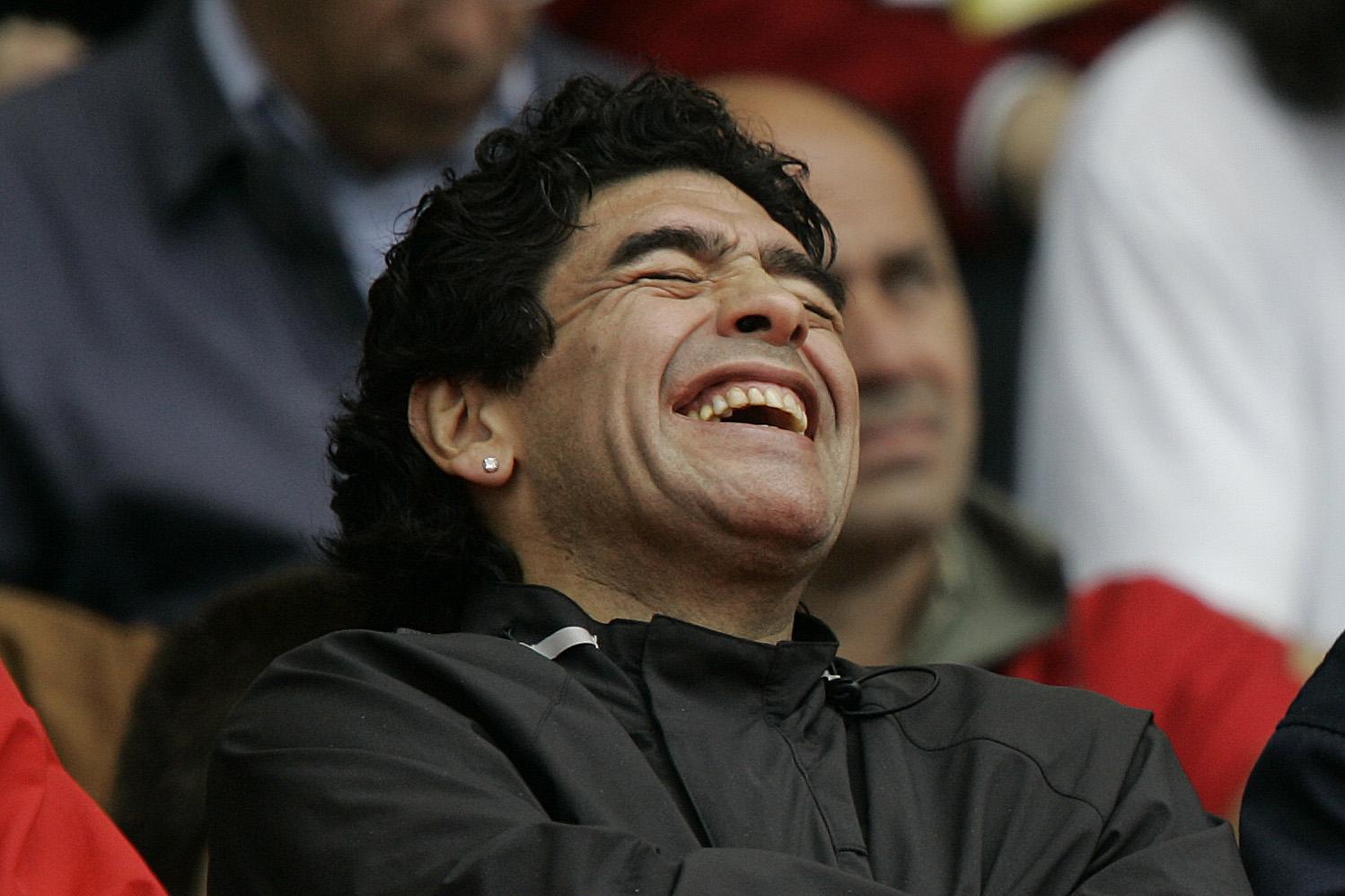 Four years later in the United States, Maradona seemed restored to health. He scored against Greece and celebrated by racing to scream into a TV camera, a disturbing mixture of joy, relief and rage.

But he ended his last World Cup like his first, prematurely. After Argentina beat Nigeria in their second group game, Maradona failed a test for ephedrine and was thrown out of the tournament.

Maradona moved to the club he supported, Boca Juniors, in 1981 and won his sole Argentine league title the following season.

He left for Barcelona for a world record fee in 1982. He won the Copa Del Rey in his first season but the club only finished fourth in the league.

He missed much of the following campaign after Athletic Bilbao's Andoni Goikoetxea broke his ankle, and when Barca lost to Bilbao in that year's cup final, Maradona started a spectacular mass brawl, flooring four opponents.

Facing a ban in Spain, Maradona moved to Napoli, becoming the first player to break the world transfer record twice.

His dazzling play transformed a club from a poor, much-mocked city and led them to their only two Serie A titles.

In a whirlwind seven years, he fathered an illegitimate child, made friends with the local mafia and enemies of the tax collectors. He also fell deep into cocaine addiction. His tempestuous time in Italy effectively ended in April 1991 when he tested positive for cocaine and was banned for 15 months.

He wound down his playing career with one season at Sevilla, one at Newell's Old Boys and two at his beloved Boca.

Player of the century

Over the next two and a half decades he had six short and unsuccessful stints managing clubs in Argentina, the United Arab Emirates and Mexico, and also two fiery years as Argentina coach from 2008-10.

Even though Argentina suffered a record 6-1 defeat by humble Bolivia in qualifying, and Maradona was banned for two months at the end of 2009 for an obscene tirade at journalists, he still led the team to the World Cup in South Africa where they won their group before being thrashed 4-0 by Germany in the quarter-finals. 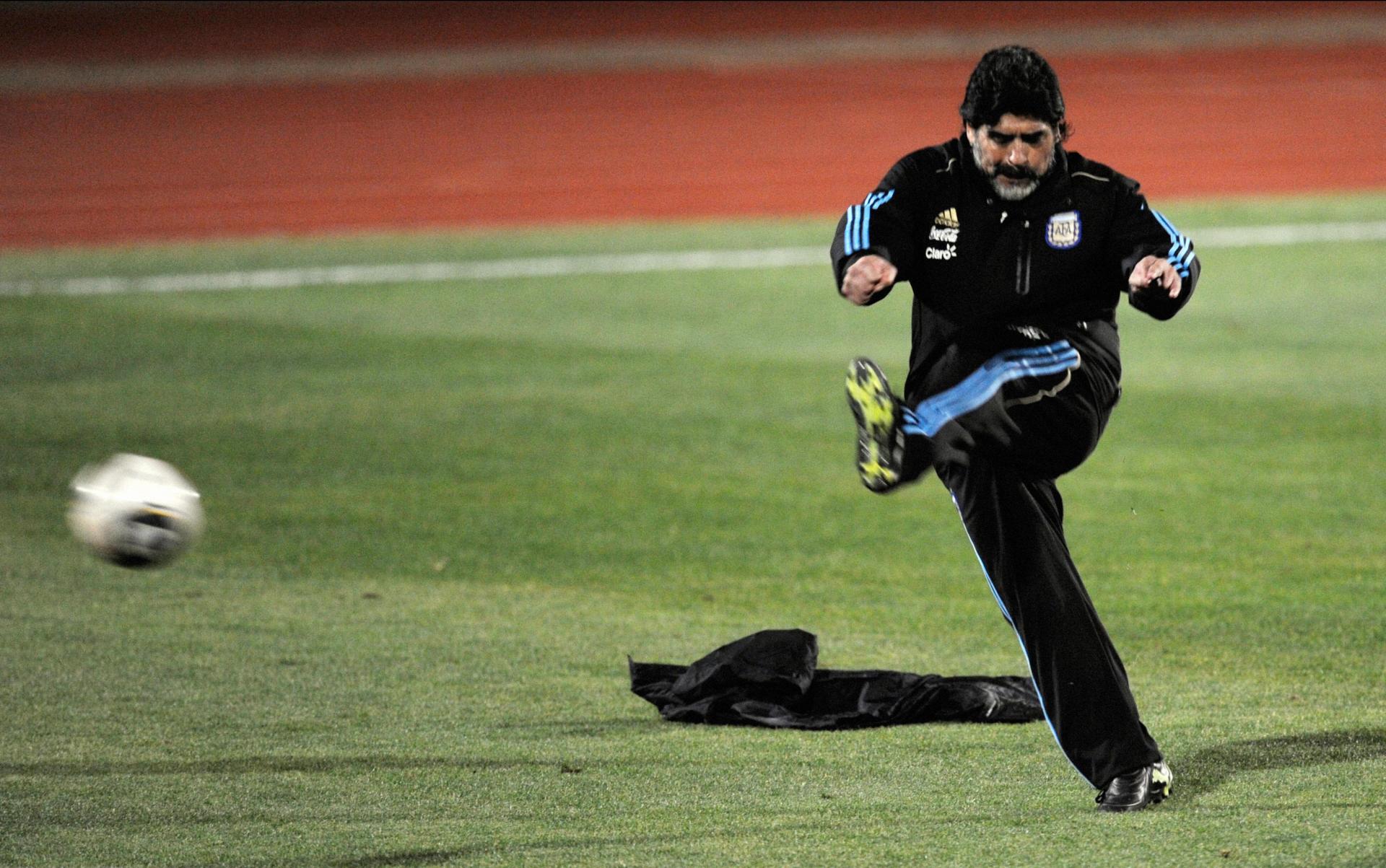 Maradona took to coaching in his later years, though success eluded him. Photo: AFP

All the while, Maradona's off-field problems continued.

He went into drug rehab on several occasions. When he quit cocaine, he binged instead on drink, cigars and food and ended up in hospital in 2007.

He was a strident supporter of Cuban leader Fidel Castro, whose image he had tattooed on his shoulder, and Venezuelan leader Hugo Chavez. 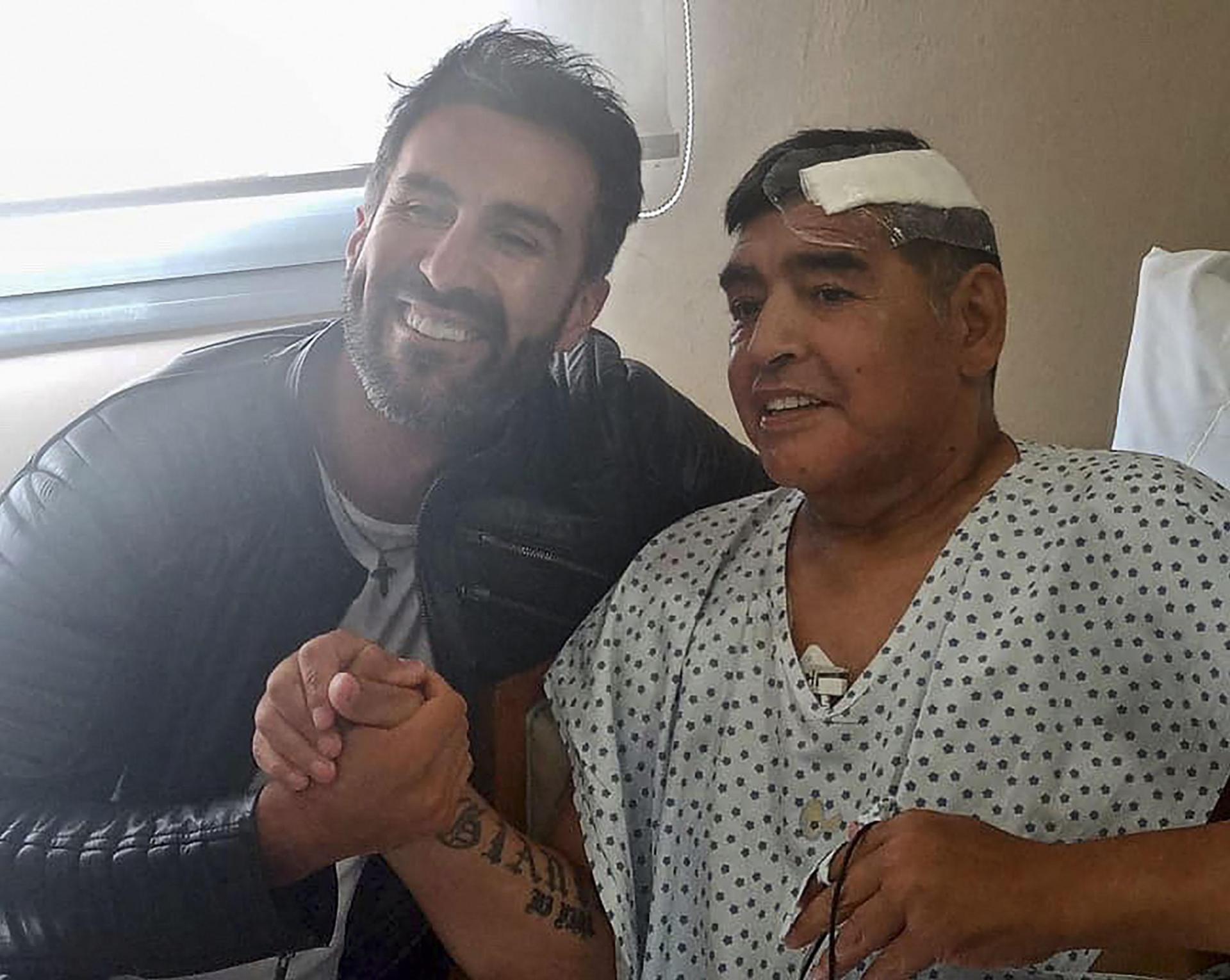 In 2000, FIFA ran an online Player of the Century poll. Maradona gained 54 per cent of the vote, Pele was second with 18 per cent. FIFA declared them joint winners.

Maradona married his long-time girlfriend Claudia Villafane in 1984. They had two daughters, Dalma and Gianinna, and divorced in 2004.

He also had a son, Diego Junior, born in Naples in 1986, although he only acknowledged paternity in 2004.