Diego Maradona, one of the greatest footballers of all time, died Wednesday at the age of 60, plunging his sport and his native Argentina into mourning.

Renowned along with Pele as one of the greatest players ever to play the game, the Argentine World Cup-winning captain died of a heart attack, having undergone brain surgery earlier this month, a member of his entourage told AFP.

Maradona will forever be known for his "Hand of God" goal against England in the 1986 World Cup quarter-final in Mexico, when he appeared to use his hand to push the ball into the net before later swerving through the English defenders for a memorable second goal that sealed victory.

Pele said Maradona had been a "dear friend" and said he hoped they would "play together in the sky" one day.

Gary Lineker, who was in the England team defeated in 1986, tweeted that Maradona was "arguably the greatest of all time" but made a reference to that infamous goal by adding: "After a blessed but troubled life, hopefully he'll finally find some comfort in the hands of God. #RipDiego"

Lionel Messi, the Argentine considered one of the world's greatest modern-day players, said Maradona was "eternal". 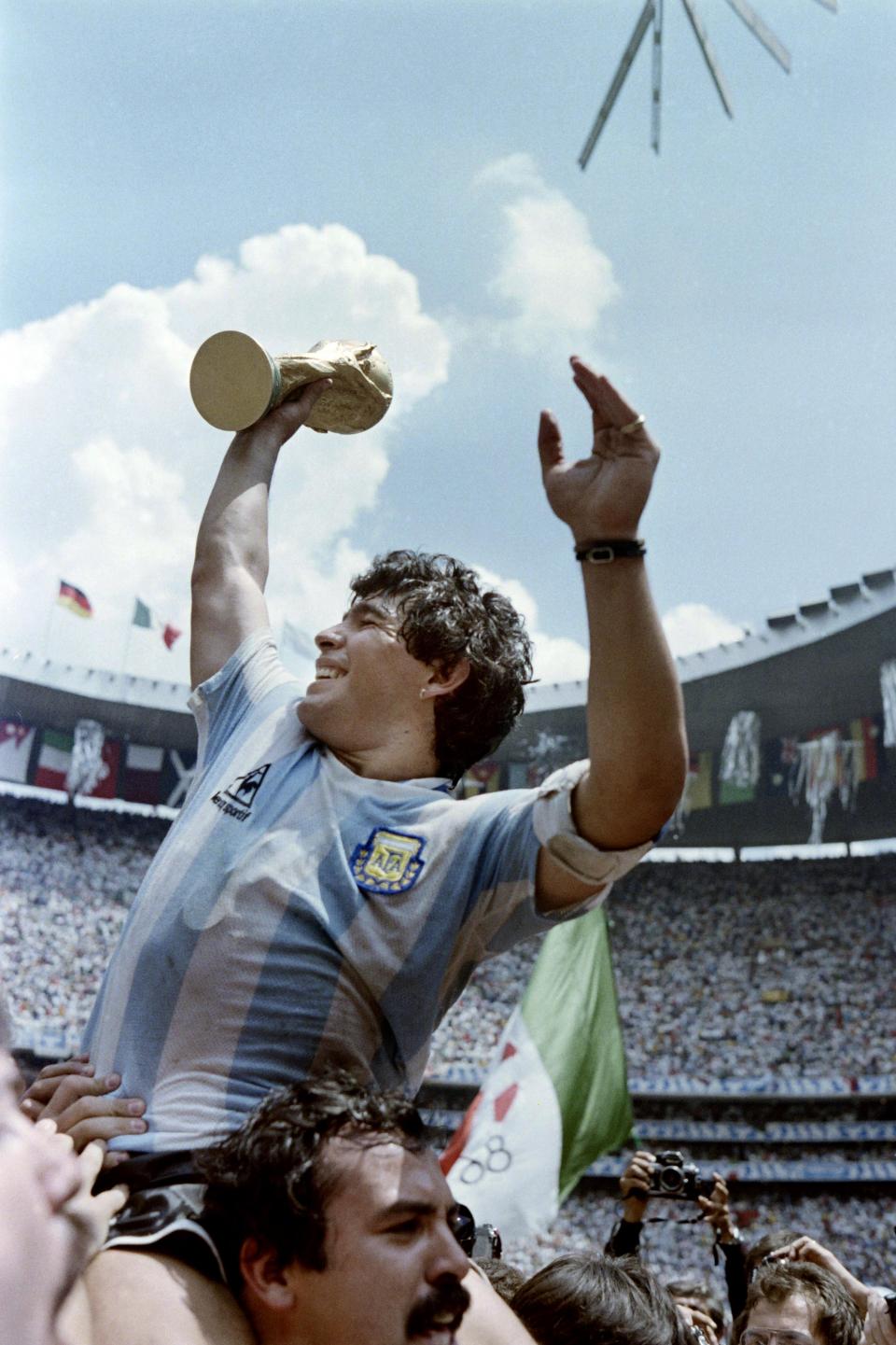 Maradona is held up high as he lifts the 1986 World Cup. Photo: AFP

Shortly before the announcement that shocked the world, Argentine media reported Maradona had suffered a serious health setback on Wednesday and was being treated at his home north of Buenos Aires.

"There are four ambulances at the door of the residence. They have summoned family members to come. It is serious," the TyC Sports channel reported.

The life of the divine footballing talent that was Diego Armando Maradona was marked by wild highs and lows, with Argentina and with club sides Boca Juniors, Barcelona and Napoli.

Excesses with cocaine and alcohol had long taken their toll on the mercurial talent's health.

The former player underwent surgery earlier this month to remove a clot lodged between his brain and skull.

Maradona has been admitted to hospital three times in the last 20 years for serious health issues -- two of which were potentially fatal -- due to his drug and alcohol addictions.

The highs were crowned by his performances when he captained Argentina to victory in Mexico in 1986.

In the final, Maradona set up the 86th-minute winner against West Germany. He scored twice in the semi-final against Belgium, beating four defenders for the second.

But the match that defined his tournament, and possibly his international career, was that win over England, in which he scored two goals that will be remembered forever -- for very different reasons.

In the 51st minute, as England goalkeeper Peter Shilton reached to catch the ball, Maradona jumped alongside him and with a deftness that fooled the eye, flicked the ball with his hand through the England goalkeeper's arms and into the net.

The goal he scored four minutes later, when he picked up the ball in his own half and glided past six England players, including Shilton, was named "Goal of the Century" by FIFA.

He played for Argentinos Juniors and Boca in Argentina before joining Barcelona in Spain, but it was in Naples where he would enchant an entire city by leading the then unfashionable club to its only two Italian league titles in 1987 and 1990.

"Always in our hearts. Ciao Diego," Napoli tweeted after his death was announced.

European football's governing body UEFA announced that Maradona would be honoured with a minute's silence before Wednesday's Champions League games.

In 2000, FIFA ran an online Player of the Century poll. Maradona gained 54 percent of the vote, Pele was second with 18 percent, but FIFA declared them joint winners.

Maradona married his long-time girlfriend Claudia Villafane in 1984. They had two daughters, Dalma and Gianinna, and divorced in 2004.

He also had a son, Diego Junior, born in Naples in 1986, although he only acknowledged paternity in 2004.