Electrogas director and investor Paul Apap Bologna is the owner of a secret United Arab Emirates company identical to 17 Black, Times of Malta can reveal.

Kittiwake Limited is one of the companies being examined in a money-laundering investigation linked to murder suspect Yorgen Fenech’s 17 Black and the Panama companies once owned by former government officials Keith Schembri and Konrad Mizzi. Fenech and Apap Bologna were key partners in the Electrogas power station project, the main plank in the Labour Party’s 2013 election plan, which has since been mired in corruption allegations.

Documents reviewed by Times of Malta show Kittiwake was set up in the Ajman free zone as an offshore company in July 2015, two months after Fenech established 17 Black in the same region.

Both Kittiwake and 17 Black operated bank accounts out of the UAE.

Five days before the Kittiwake transfer, another company of interest to investigators, EN3 Projects, wired $300,000 to Wings Investments.

17 Black’s name was changed to Wings Development a month after the transfers.

Fenech told Noor Bank during a later review of Wings Investments’ account that he was involved in a project with EN3 in Qatar and Bangladesh, with the help of Kittiwake owner Apap Bologna.

He said the $200,000 payment received from Kittiwake was a refund for an overpayment he [Fenech] had mistakenly made to Apap Bologna’s company.

Apap Bologna told the public inquiry into Caruana Galizia’s murder last October that he had no knowledge of Fenech’s plans to replicate the Electrogas project in Bangladesh.

He also claimed to have no knowledge about Fenech’s ownership of 17 Black, even after Times of Malta outed the link in November 2018.

“It was a media accusation, not a fact,” Apap Bologna said of 17 Black.

Apap Bologna did not respond to multiple requests for comment by Times of Malta.

The setting up of 17 Black and Kittiwake around the summer of 2015 coincides with another notable event.

In June 2015, then Energy Minister Konrad Mizzi and then OPM chief of staff Keith Schembri took over ownership of the Panama companies Hearnville and Tillgate.

“My client will get them directly to the bank in original,” read an e-mail by Nexia BT to Panama law firm Mossack Fonseca about the documents needed to open the accounts. 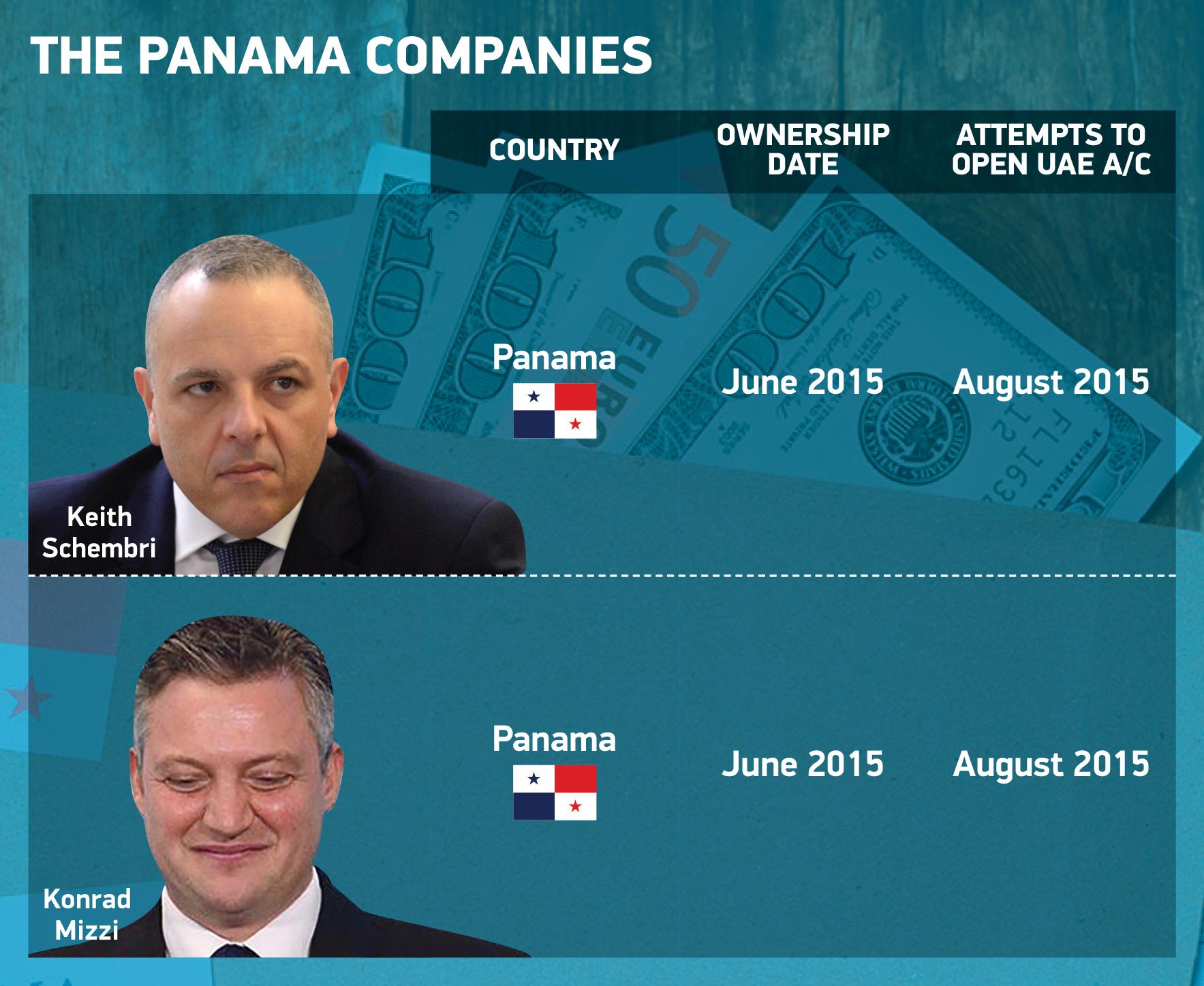 On the day of the deadline given to Mossack Fonseca for the documents, Mizzi departed to the UAE, returning to Malta on September 1.

Both Mizzi and Schembri have denied ever opening accounts for their Panama companies.

A later attempt to open accounts at Winterbotham Bank in the Bahamas would reveal 17 Black and Macbridge as the planned source of funds for the Panama companies.

Times of Malta and its investigative partners uncovered last March how the secret company Macbridge is owned by the mother-in-law of Chen Cheng, a Chinese negotiator involved in brokering major Enemalta energy deals.

The attempts to open the Winterbotham accounts stopped in February 2016, as soon as Caruana Galizia started hinting about knowledge of the Panama companies.

Fenech set up Wings Investments in the UAE in May 2016, as investigations into the Panama Papers and 17 Black by the Financial Intelligence Analysis Unit, Malta’s anti-money laundering body, started to kick off.

An intelligence report identifying Fenech as 17 Black’s owner was sent to police in spring 2018, with the FIAU outlining its suspicions that Konrad Mizzi was involved in criminal activity in the energy sector.   Both Mizzi and Schembri deny any wrongdoing.

Following his arrest linked to Caruana Galizia’s murder in November 2019, Fenech had claimed to have knowledge of corruption in major government projects.

He has yet to follow through on his claims.

Schembri was charged in an unrelated money-laundering case in March. Mizzi has been questioned by the police but has yet to face any charges.

Who is Paul Apap Bologna? 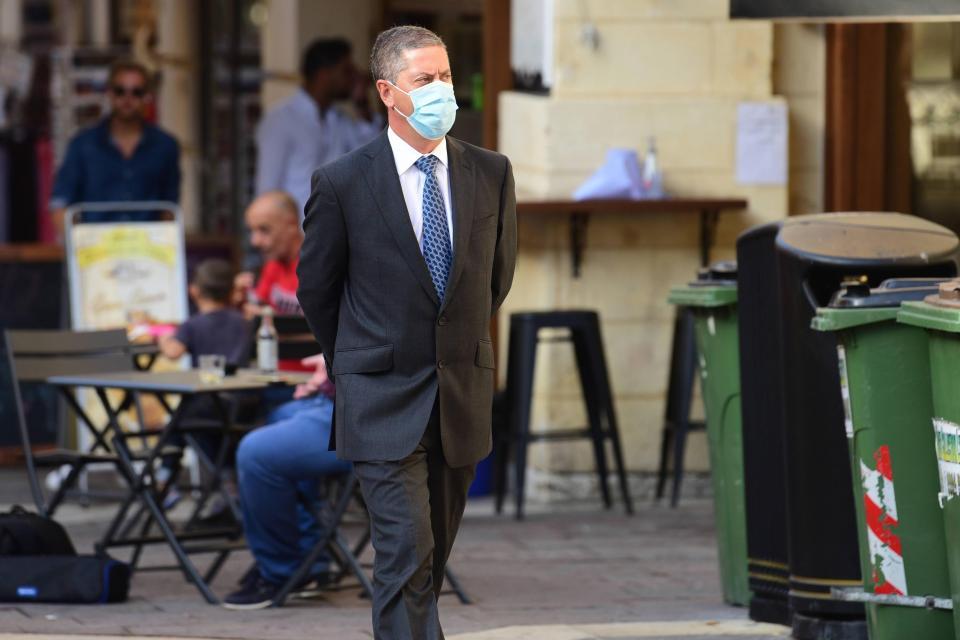 No concrete interest in the project was ever shown by the PN government.

Apap Bologna told Times of Malta last September that he “has faith” in the Electrogas project. His declaration came just a week after the Gasan Group announced its intention to pull out of the project.

Apap Bologna took over as the Maltese representative on the Electrogas board following Fenech’s arrest and prosecution on murder charges.

Daphne Foundation: Contract must be rescinded

In a reaction to the above story, the Daphne Caruana Galizia Foundation on Sunday said corruption in Electrogas deals was 'undeniable and indefensible'.

It pointed out how Apap Bologna is one of the shareholders of Electrogas and received a large “success fee” when the government awarded the contract to the consortium.

It also recalled that the Daphne Caruana Galizia’s family had written to Siemens AG (another Electrogas shareholder) asking the company to sue for the Electrogas contracts to be rescinded, on the basis that they were procured by flagrant and undeniable corruption. Daphne paid with her life to reveal the corruption behind the deals.

"Today we reiterate our call to Siemens and also call on the Government of Malta and the Opposition to commit to scrapping the Electrogas deals. Our leaders must stand for the public interest instead of the private interest of the criminals who profit off us all," the foundation said.