The use of explosives at the Inland Sea in Gozo could have an effect on the already weak structure of the nearby Azure Window, an expert has warned.

Geologist Peter Gatt was commenting in the wake of an investigation by the planning authority which revealed that explosive material was “probably used” to do rock cutting in the tunnel leading to the Inland Sea.

“The use of explosives can trigger unexpected catastrophic events outside the sea tunnel that can affect the Azure Window as well as other areas in the Dwejra region,” Dr Gatt warned.

The whole area is one of the biggest tourist attractions in the Maltese islands, attracting tens of thousands of visitors a year, with the iconic Azure Window the biggest pull.

A magisterial inquiry into the suspected rock cutting has now been launched following a Nature Trust report, which Mepa passed on to the police. Sources said the probe will look into claims that the illegal cutting was aimed at widening the entrance to allow larger boats to sail through.

In 2012, a large chunk of rock from the Azure Window collapsed, leaving a noticeable scar on the upper part of the structure, where a deep fissure had long been evident. A geological rock assessment carried out a year later by local firm Geoscience Consulting Ltd, headed by Dr Gatt, concluded there was no “imminent” risk of collapse.

However, the study, commissioned by the Environment Ministry, found that collapse was still the inevitable fate due to erosion by the elements. The Azure Window is expected to collapse within decades.

Exposure to vibrations from a nearby source, in this case explosives in the Inland Sea tunnel, could have bearing on this process, Dr Gatt said.

He said the Dwejra area had a unique structural geology for the Maltese Islands, consisting of several spectacular large sinkholes that resulted from natural catastrophic events caused by ground instability and collapse. 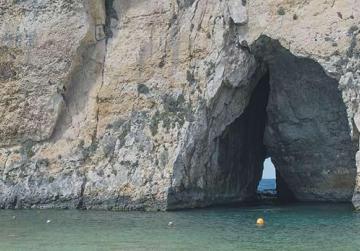 “Detailed study of the surface and underlying geology is needed before explosives are used,” he warned.

As for the effects on the tunnel, he said the blasts could dislodge large boulders, which could block the passage.

“Since it would be impossible to remove these boulders inside the sea tunnel, more explosives would need to be used. The debris would also affect the depth of water in the tunnel for some time.”

In turn, this could also have long-term repercussions on the marine life within the Inland Sea ,as it would affect the flow of fresh water entering this confined area, increasing salinity levels.