Malta has secretly negotiated an agreement with Libya that sees the Armed Forces of Malta coordinating with the Libyan coastguard to intercept migrants headed towards the island and returned to the war-torn North African country.

The agreement for “mutual cooperation” was struck between members of the AFM and the Libyan coastguard, with government official Neville Gafà acting as an intermediary.

Mr Gafà, who works out of the OPM in an undisclosed position, has faced repeated allegations of bribery linked to the issuing of medical visas to Libyan nationals, claims he denies.

He has come under fire for posing as a “special envoy of Prime Minister Joseph Muscat” during meetings with the Libyan government and was exposed as having held a meeting with a Libyan militia leader who ran extortion rackets and a private detention centre, where former regime officials and sympathisers were held.

In one such meeting, held on June 18, Mr Gafà sat in on talks with the Libyan deputy Prime Minister Ahmed Maiteeq, attended by Colonel Clinton O’Neill, head of plans and intelligence at the AFM.

The meeting was led by Malta’s new ambassador to Libya, Charles Saliba.

However, a senior government source told The Sunday Times of Malta that talks between Mr Gafà, the AFM and the Libyan authorities, on the subject of cooperation, first started around a year ago.

“We reached what you could call an understanding with the Libyans. When there is a vessel heading towards our waters, the AFM coordinates with the Libyans who pick them up and take them back to Libya before they come into our waters and become our responsibility,” the source said.

He added that had the agreement not been reached with Libya then the island would have been “drowning in migrants” by now.

A spokesman for the Prime Minister said last night that bilateral meetings on various sectors are held on a regular basis and Malta always acts in accordance with applicable international laws and conventions.

“The EU is actively advocating in favour of compliance with instructions of competent authorities and against the obstruction of operations of the Libyan EU-funded and trained coastguard to help support migration management and fight smuggling.”

The search and rescue areas form part of high seas where foreign military assets have every right to investigate any illegal activity departing from their coast, the spokesman added.

Without an agreement, the island would have been ‘drowning in migrants’ by now

“In the past months, Malta has continued to welcome on a humanitarian basis migrants and asylum seekers, even when not legally obliged to do so, in a spirit of cooperation with other European states and solidarity with migrants.”

The OPM did not respond to a question asking whether in at least one instance the Libyan coast guard had entered Malta’s search and rescue area or whether it recognises Libya as a safe port. In a tweet on one such particular incident, which took place on October 18, Vincent Cochetel, UNHCR’s special envoy for the Central Mediterranean, said he believes the case may have constituted a violation of maritime law.

“The problem is that the migrants were disembarked in Libya. That’s certainly a violation of maritime laws. It’s clear that Libya isn’t a safe port,” he said.

A spokesman for UNHCR office in Rome said they had reached out to the Maltese authorities for an explanation and were still waiting for the relevant information to be handed over.

The list of accusations against Libya’s coastguard is long: human rights violations, including torture, hindering rescue operations of volunteer rescue groups, and ties to smuggling gangs are but a few. 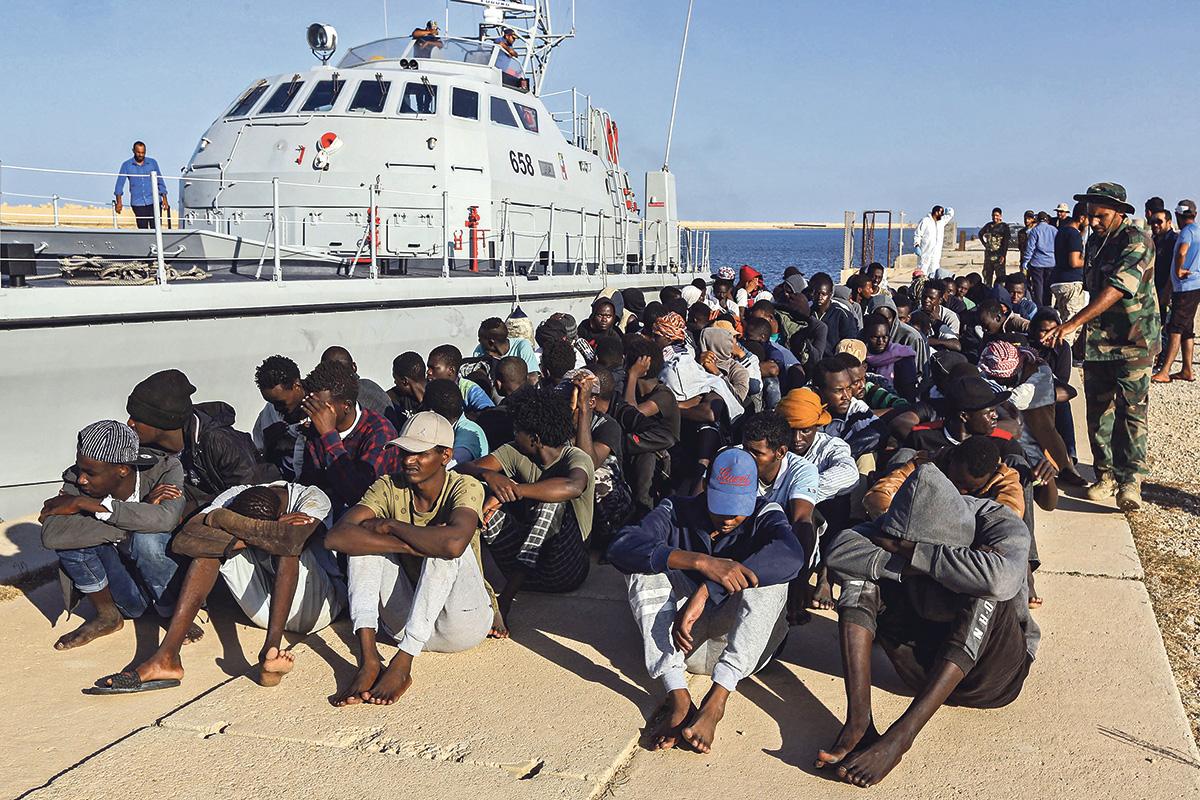 This picture taken on October 1 shows rescued migrants sitting on a pier next to a Libyan coast guardship in the town of Khoms, 120 kilometres east of the capital.

The government source however, justified the deal, saying it followed a similar understanding reached between the Libyan and Italian governments.

It also tallied with the EU’s highly-criticised position of supporting the Libyan authorities, he said.

While Malta received few or no migrants at the height of the migration crisis in the Central Mediterranean between 2014 and 2017 when Italy was in charge of the rescue effort and accepted the disembarkation of virtually all migrants rescued, the tide turned around 2018 when a right-wing government was elected in Italy.

In September, the EU extended its anti-migrant-smuggling mission along the Libyan Mediterranean coast, by six months. However, actual naval operations by the EU remain halted, with the mandate now mainly consisting of air support and training Libya’s ill-equipped coastguard.

Human rights groups have repeatedly called on the EU to stop its policy of allowing migrants to be returned to Libya, where they face hellish conditions in detention centres, according to UN organisations.

Mr Cochetel insists there is no safe port in Libya for migrant arrivals.