Daphne Caruana Galizia had received a cache of leaked data from the heart of the power station project. The leak continued after her death and the data was passed on to the Daphne Project. A search of the data reveals Yorgen Fenech’s views on one of her blogposts and his communication with the Office of the Prime Minister, among others. Jacob Borg reports.

“Fake news,” Mr Fenech said in an internal e-mail dated May 25, 2017, found in a cache of data leaked to Ms Caruana Galizia and later obtained by the Daphne Project. 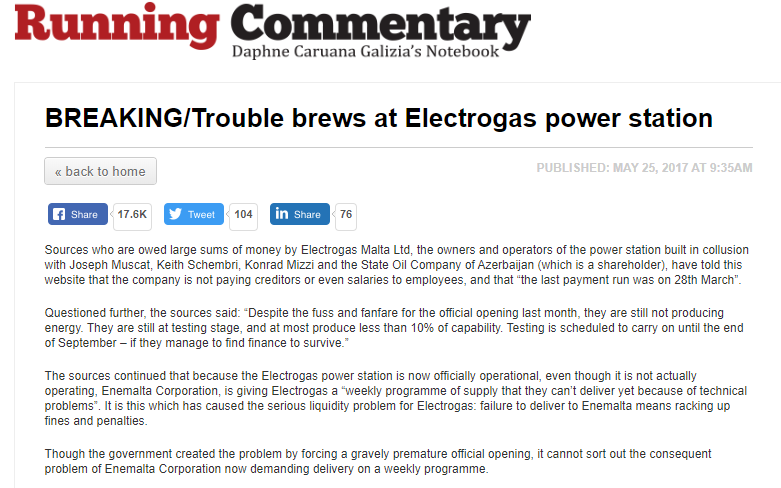 The assassinated journalist wrote in a blogpost titled ‘Trouble brews at the Electrogas power station’ that the consortium owed “large sums of money” to various creditors and that “the last payment run was on 28th March”.

In a subsequent exchange, a senior Electrogas official acknowledged that the consortium had indeed fallen behind on its payments.

Just one day before Ms Caruana Galizia’s post and a few days prior to the 2017 general election, the government had secretly agreed to extend a €360 million loan guarantee controversially given to the consortium in 2015.

The extension was necessary as the consortium had failed to meet a deadline to re-finance the original €450 million loan it had taken out for the project. 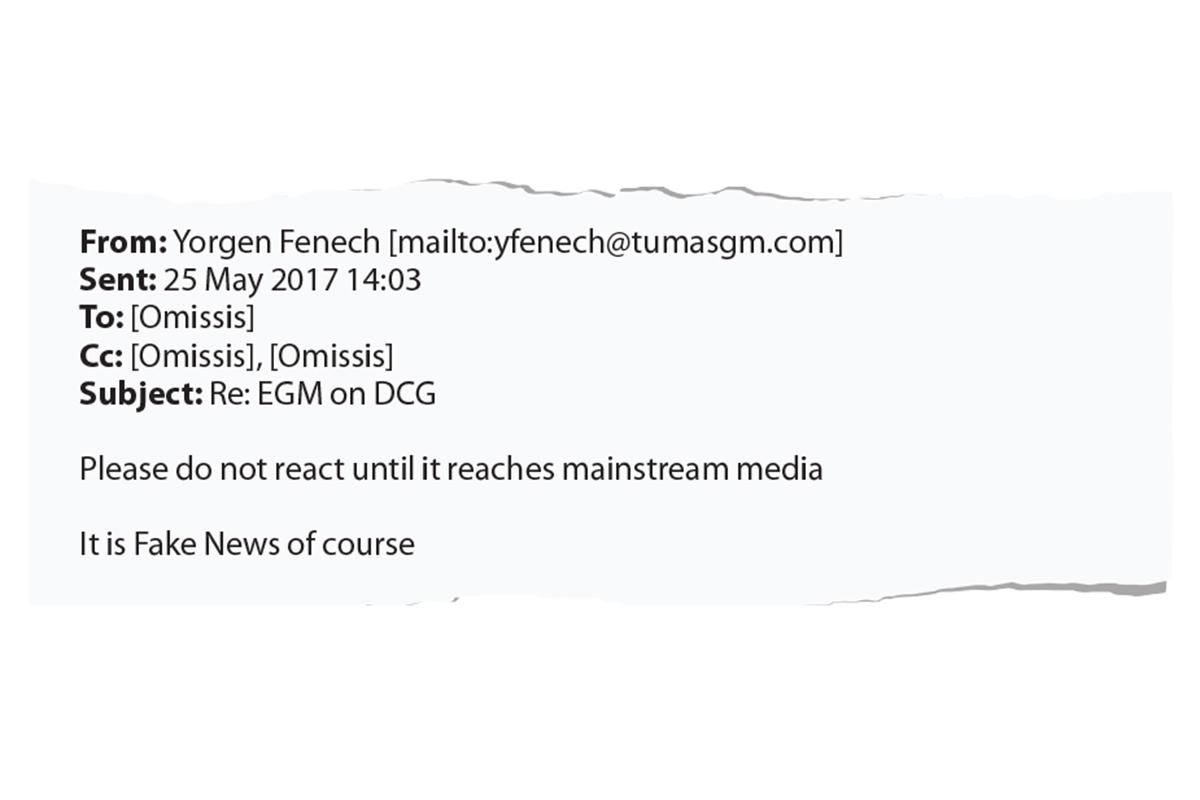 Electrogas consists of a trio of local businessmen from the Tumas and Gasan Groups, as well as medicine importers CP Holdings.

‘We have to hold tight for a week’

As the firestorm surrounding the project grew and information about 17 Black’s links to Keith Schembri and Konrad Mizzi began to emerge, Mr Fenech said in an e-mail on May 27, 2017 that the last week prior to the election would get messy.

“… today Simon Busuttil said they will remove tanker from Delimara and buy from interconnector. 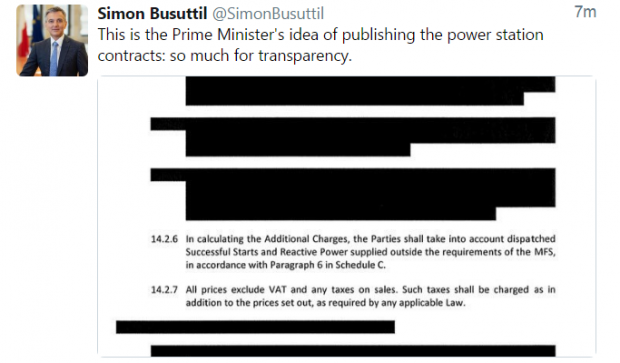 Former Opposition leader Simon Busuttil was a staunch critic of the project.

“Hogwash in my opinion but it will surely make new lenders really nervous. I think we have to hold tight for a week,” Mr Fenech said.

In February 2017, Ms Caruana Galizia had uploaded a blogpost titled ‘17 Black – the name of a company incorporated in Dubai’.

At that point in time, Mr Fenech’s ownership of 17 Black was not in the public domain.

A month after Ms Caruana Galizia’s post, 17 Black’s name was changed to Wings Development Limited. It would take a joint investigation by Times of Malta and Reuters another 18 months to confirm that Mr Fenech owns 17 Black.

17 Black was set up in the United Arab Emirates, a secretive jurisdiction often used to register anonymous shell companies.

On the day of Ms Caruana Galizia’s murder, an Electrogas employee was admonished after chasing for Mr Fenech’s signature to process two “urgent payments” that needed to be cleared on October 16. 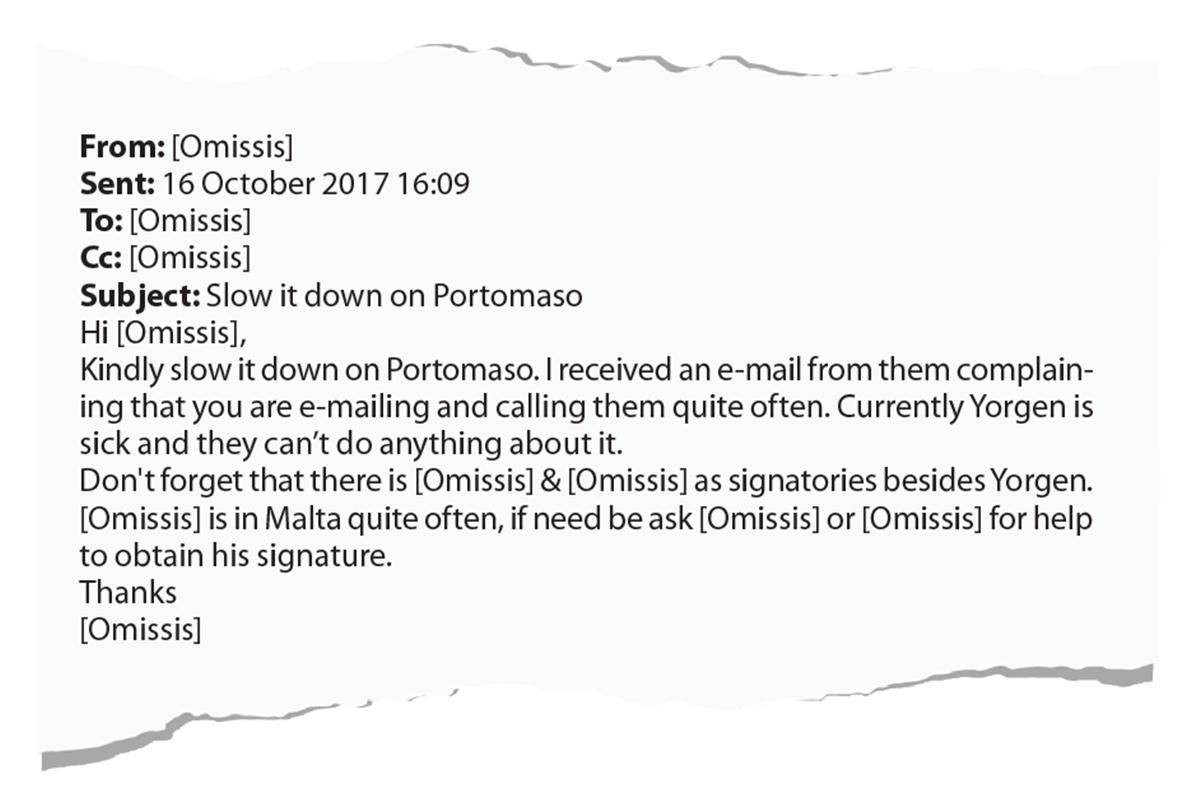 In an e-mail with the subject line ‘Slow it down on Portomaso’, the employee was told to stop chasing for the signature.

“Kindly slow it down on Portomaso. I received an e-mail from them complaining that you are e-mailing and calling them quite often. Currently Yorgen is sick and they can’t do anything about it,” the e-mail read. ‘Just get on with the party’

Prime Minister Joseph Muscat was the guest of honour at a party held at Level 22 in Portomaso celebrating the successful re-financing of the power station project, four months after Ms Caruana Galizia was killed in Bidnija.

Questioned by Times of Malta, a spokesman for Dr Muscat did not state when the Prime Minister was first informed that Mr Fenech was a person of interest in Ms Caruana Galizia’s murder. 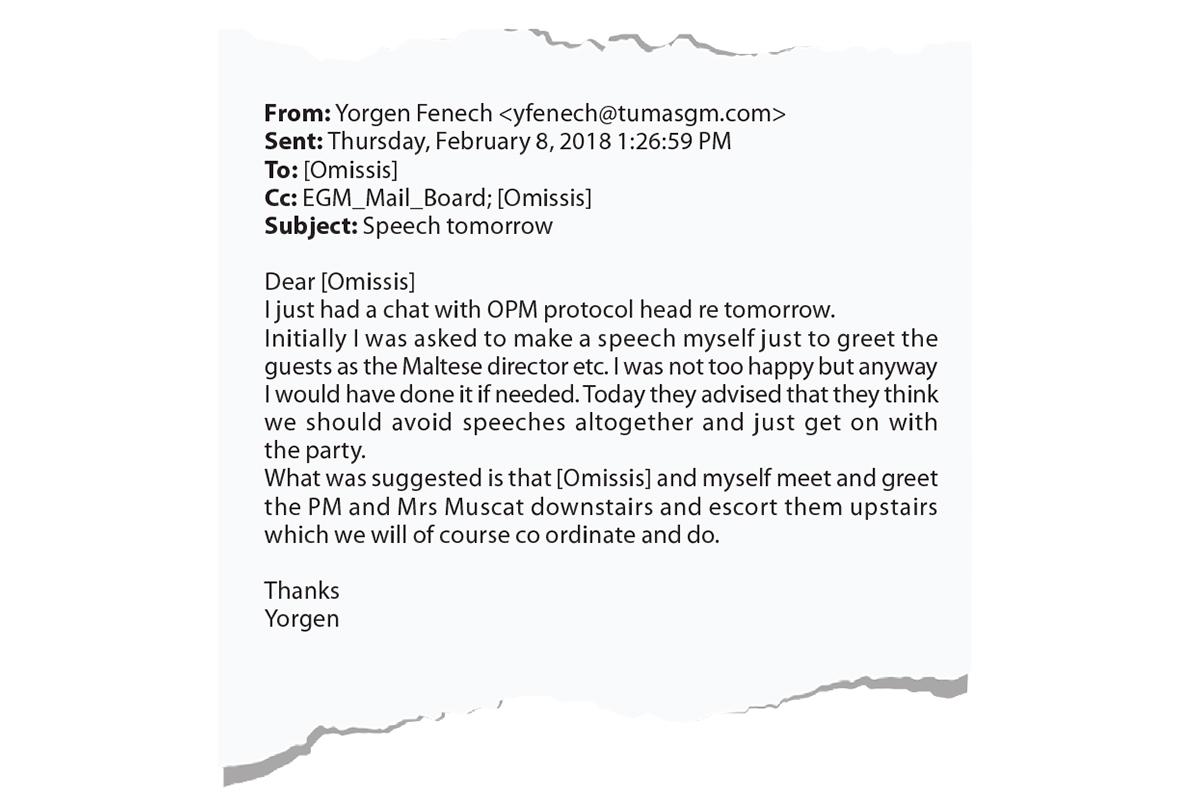 “For the time being, the Prime Minister will refrain from commenting on issues that could lead to him being accused of intruding, in any way, in the investigations.

“In this regard you may wish to note the editorial of The Times which today advised that the Prime Minister should stop taking centre-stage by briefing the press,” OPM head of communications Matthew Carbone replied. Mr Fenech helped compile the guest list, which also included Keith Schembri. Dr Muscat’s chief of staff claimed he was not involved in the power station project when questioned by Times of Malta last year.

In an e-mail dated February 8, 2018, Mr Fenech informed the Electrogas board that the Prime Minister’s office had initially asked him to give a speech, but later decided against it. 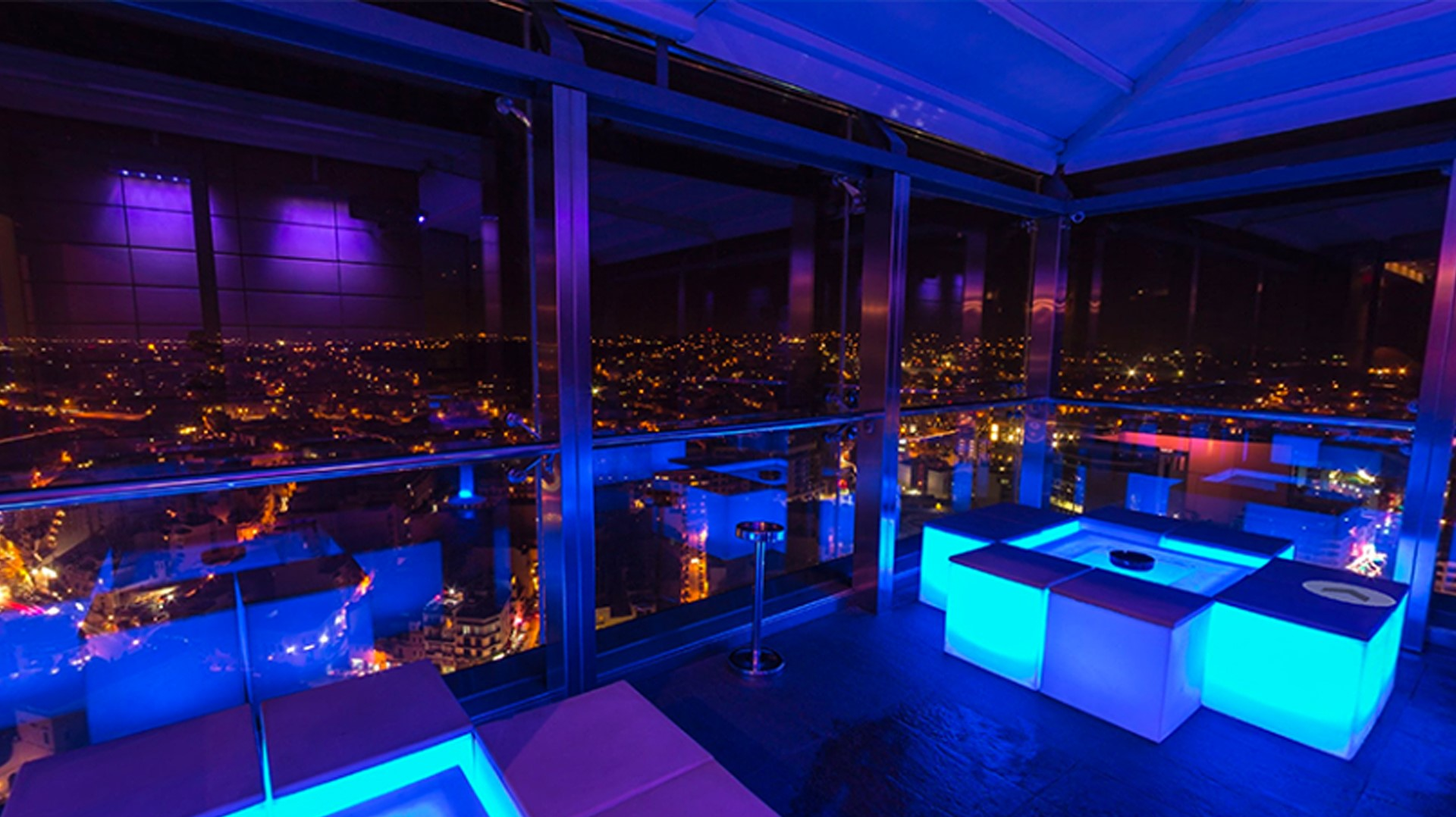 Level 22, the lavish Portomaso venue for the Electrogas party attended by the PM. Photo: Guidememalta.com

“Today they advised that they think we should avoid speeches altogether and just get on with the party.

“What was suggested is that [Omissis] and myself meet and greet the PM and Mrs Muscat downstairs and escort them upstairs which we will of course coordinate and do,” Mr Fenech wrote.

A source confirmed to Times of Malta that Dr Muscat did indeed attend the Level 22 party. The same source did not spot Mr Schembri on the night. 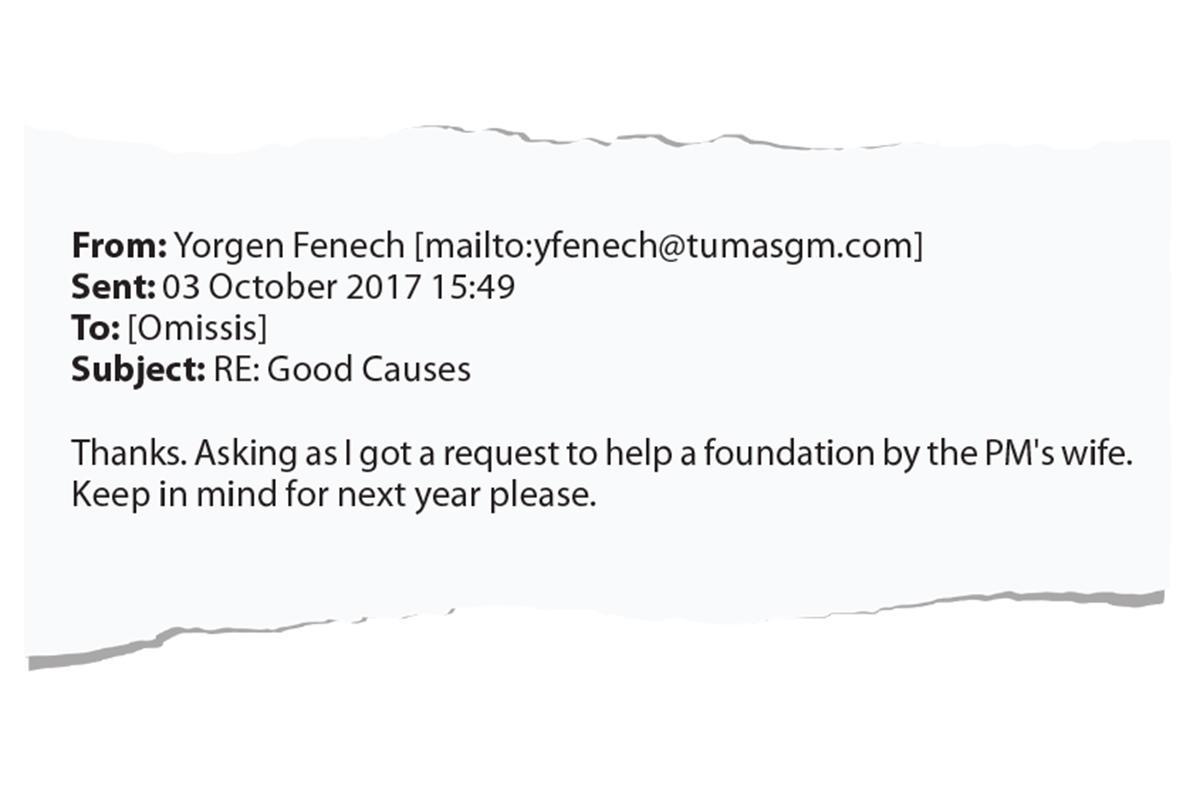 After being informed about the budget, Mr Fenech went on to elaborate about the reason behind his enquiry.

“Asking as I got a request to help a foundation by the PM’s wife. Keep in mind for next year please,” Mr Fenech explained. 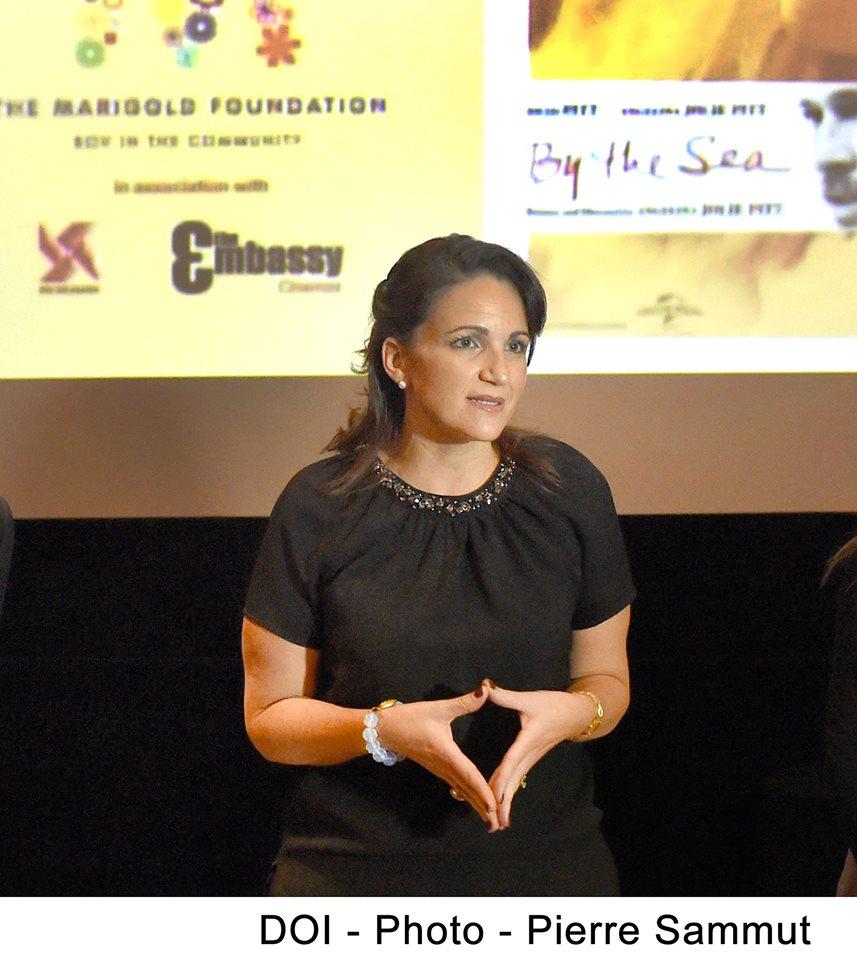 Questioned in a further e-mail about the amount he had in mind, Mr Fenech replied: “Lets first set a budget :)”

Note: Emails have been reformatted and the names of people unrelated to the murder investigation have been omitted.