Finance Minister Clyde Caruana sat down with journalist Ivan Martin for a wide-ranging chat ahead of October’s Budget. Here’s a round-up of the main discussion during the Times of Malta live event.

A transcript of the full interview is also below.

At the business breakfast event, Caruana said there is an ‘element’ of Malta being a nation of tax dodgers – something he is working on addressing.

Caruana said he has now repurposed some €200million from this year’s financial Budget which will go towards subsidizing consumer utility bills.

Although he would not say where this had come from, Caruana added that a spending review carried out by his ministry’s economic policy department has been concluded.

This has identified several state entities which have accumulated savings after having not spent their annual budget for successive years.  These will be repurposed and directed towards the energy crisis, he said.

Caruana said that had the government not acted to subsidies electricity and fuel prices, consumers in Malta would be paying around 140 per cent more.

Caruana said he is also revisiting public sector recruitment policies, suggesting that once some on the government payroll retire, they may not necessarily be replaced.

Turning to inflation, Caruana said some businesses are being predatory and abusive in increasing prices, warning that this could come back to haunt them once the market stabilises.

He also said that the long-drawn-out restructuring of Air Malta should be concluded by next year and is exploring plans for a massive offshore wind farm in Malta’s territorial waters. 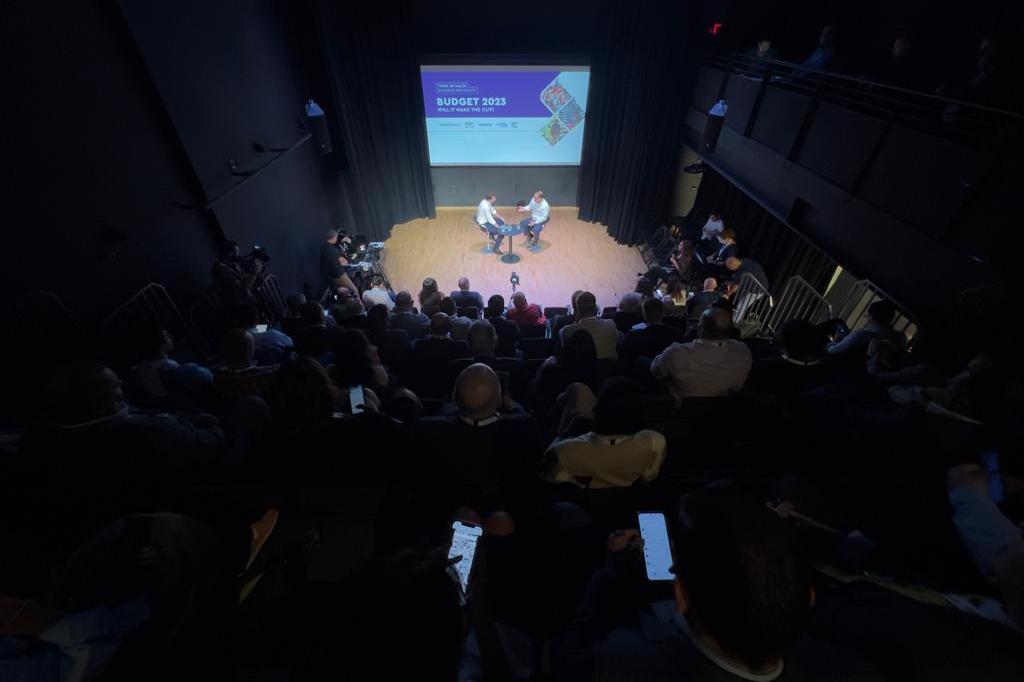 The event was held on Friday morning at Theatre Next Door. Photo: Jonathan Borg.

IM: Minister, before the Budget date was even announced you began a spending review across the entire government to identify areas where money can be saved. What did you find?

CC: The way things are evolving internationally; we need to focus on how the government manages its resources.

This isn’t a sprint, but likely a marathon that is going to last months, if not years. If this situation really does last for years, then I need to ensure we have the capital to meet it.

So, with that in mind, over the summer we had an in-depth look at where the money is going department-by-department, entity-by-entity. We made a priority list and tried to trim the fat.

IM: Where did you trim the most?

CC: We are still finalising and that will be clear in the budget estimates next month. But, by way of example, let’s say there are some entities that have a €10 annual budget.

They may only need €9.50, and without reporting that extra 50c, they chose to keep it as savings.  There are a lot of entities that have millions of euros in savings at the central bank and that should not be the case.

IM: You’ve said you want to cut around €200 million in public spending. Have you found that money, and where did it come from?

CC: Yes, I found it.  It came from across the government. It amounts to 2.8% of the government’s budget so to find €3 out of every €100 isn’t too difficult.  There are areas like health and pensions which we didn’t try and economise on.

But there are other areas where we found that there can be savings, especially when it comes to money that was not even being spent.

IM: Every year Malta has around €1 billion in capital to allocate to its various projects. But we’ve been spending big, first on COVID wage supplements and now on utility subsidies. What does that mean for the government’s finances? What is the piggy bank going to look like next year?

CC: From my point of view, the debt-to-GDP ratio is the most important metric, how much money the country is borrowing relative to how much it is producing. This is what ultimately needs to be sustained. Right now, it’s at about 60%. I envisage us sticking to that figure until 2027.

By way of comparison, in mainland Europe, this ratio is slowly reaching the 100 per cent mark. Even though we will have a 5.8% deficit – 5.5% next year – that will allow us to keep the debt-to-GDP ratio stable. We still have room to manoeuvre.

IM: This year the government has the same amount of money to spend, but this time much more of it is in the form of EU funding. How does that change the government’s plans?

CC: When we were doing the reprioritisation of national spending, in the back of my mind I knew we had another tranche of funds coming in from the EU’s European Regional Development Fund (ERDF), which can be spent on capital projects.

And then there is the Recovery and Resilience Fund, which the EU introduced to soften the impact of COVID.

The amount of EU funds is quite substantial and will make up about 33% of our capital vote. This will substitute, in part, national funding.

Next year's capital expenditure will be just short of the €1 billion mark.

IM: We’ve discussed spending, but what about revenue? You’ve pledged no new taxes but how much more tax do you need to collect to finance what you have planned for 2023?

CC: This country has enough potential to generate the revenue it needs through existing taxes and tax rates. That means there is no need for any new taxes or an increase in the rate of existing taxes. But it also means we cannot tolerate those who do not pay what is due.

IM: Who are the worst offenders?

CC: We have seen revenue improve significantly. This year we have collected around €120 million that was not accounted for – that is tax that wasn’t being paid.

The Inland Revenue Department has been doing a good job throughout the past year. They called in all those who have missed payments, and they changed the system. If tax repayment plans aren’t honoured, even banks won’t accept that today.

IM: Are we a nation of tax dodgers?

CC:  There is an element of that. I’ll give an example. In 2019 when the economy was doing well, just before COVID hit, the country’s growth rate was 6% in real terms, but just 35 to 40% of businesses were declaring they were making a profit. The rest were declaring a breakeven or even a loss.

There’s more. Then they were employing more staff, which doesn’t make business sense to me.

This is something that must change too.

IM: What is the government doing to address this?

CC: There will be a change in culture. The tax department is changing, not just its approach, but it is also getting substantial investment in new technology, for instance, that will enable it to do the work that needs to be done.

IM: Malta’s deficit hit €1.6 billion last year, and the national debt is soaring. Yet you are promising a social budget. Aren't you just kicking the can down the road for the minister who will come after you?

CC: No. Because the budget deficit will be less than €1 billion and even less next year, it is on a downward trend. According to the figures we have, and I’ll be discussing with the European Commission shortly, we will be beneath the 3% threshold with respect to our deficit – at around 2.8%.

IM: So, you don’t envisage a recession in Malta?

IM: Inflation is rising. Is there anything the government plans to do to intervene in the market?

CC: I don’t believe we can do anything the likes of what used to happen in the 80s. We can’t have price-income policies.

That would simply lead to shortages on supermarket shelves. Imagine we set the price of pasta at €1.50 but the price goes up internationally. Businesses would just not import pasta.

That said, there is a reality, it is biting hard. I’m very much aware that those most in need are being hit the hardest, and that is why we will have additional compensation to the cost-of-living mechanism.

The economic policy department has been working on this – it is ready and will address about 20% of the population.

IM: Do you think some operators are being abusive or predatory when it comes to price increases?

CC: Definitely. There are certain sectors that are abusing and are making up for what they lost during COVID.

I’m not saying there are no increases in costs from abroad, but it is also true that certain people are abusing.

It can be quite short-sighted too. If one keeps increasing prices, people will have to adjust their purchasing patterns.

IM: A reader, Julia, has asked 'can the minister tell me how to survive on a €600 monthly pension?’

CC: We are fully aware that pensioners are the hardest hit, so assistance to pensioners will get a very significant increase.

CC: Both political parties have been engaging with the tax department to reach agreements.  If I’m not mistaken one of those agreements has now been concluded.

IM: A question we received about inflation: what happens if consumer prices keep going up?

CC: It won’t keep going on for years, but the next couple of months. At the end of the day, Europe will head into a recession and that recession will correct inflation. It has always worked out like that.

Herman Grech, Times of Malta: What are you going to do about excessive public sector employment? Are you considering a freeze?

CC: It has increased over the years and moving forward these must be managed. I am looking at the way we replace those who retire, and we are reworking this as I believe it will save us millions of euros. Education and health must be given full priority, but the rest of the public sector… that is something we are looking at.

The interview has been edited for clarity and brevity.