The Gozo fast ferry services have changed from what was once an extremely competitive environment to an "unacceptable" system of monopoly, Gozo Business Chamber CEO Daniel Borg complained on Monday.

Borg was speaking during a parliamentary Gozo Affairs Committee meeting during which the service was discussed.

Launched just over a year ago, two fast ferry services, run by Virtu Ferries Gozo and Gozo Fast Ferry, started to operate from the a newly built terminal in Valletta.

At the time, the two vessels operated on separate schedules and charged different fares for passengers.

A year on, the two operators have reformed their ticketing system so that a ticket bought from one company can be used on the other’s service. The two ferries now operate on a shared schedule.

“When the fast ferry service was introduced, it was a highly competitive environment. At one point there was a trip nearly every half hour,” Borg said.

“While competition is very good, we are now in a completely opposite situation, where we have two operators who share a schedule. You can say we went from one situation of extreme competition to a system of monopoly, and this is not acceptable.”

While the services have changed and adapted, there are still gaps which need to be addressed to improve connectivity, he said.

One issue he pointed out was the change in the schedules.

He said back in June 2021, there would be 18 trips from Mgarr to Valletta and back on weekdays, and 22 trips on each of the two weekend days.

The number was now down to 10, he said, adding the frequency of the trips had decreased by between eight and 12 trips both ways. 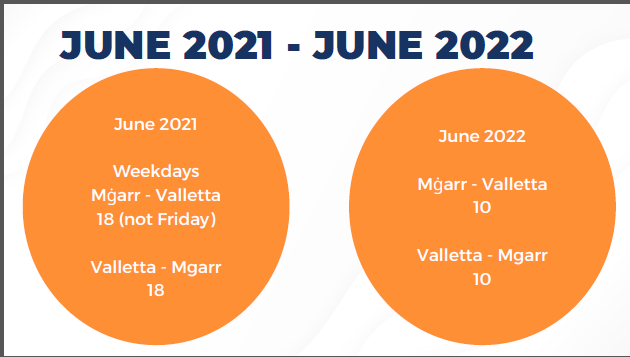 “Now that cultural activities in both Malta and Gozo are increasing, the last service from Mgarr leaves at 8:15 pm and from Valletta at 9:15 pm. While in winter this might work, in summer it’s a different story.”

He also criticised the removal of the Tallinja card to pay for trips.

He said there was a possibility for the government to intervene and issue a tender for specific times which are not being served.

While the service was good, it needed to grow and become more sustainable, and there needed to be more communication between the government and operators.

'The schedules must change'

"Right now the service is running with certain limitations. For the service to be more sustainable and to benefit economically, the schedules must change and more trips must be introduced, especially in the evenings."

He said accessibility to Gozo is crucial and the fast ferry has been a game changer for connectivity.

"It was courageous to introduce this service back when Malta was lacking tourism, but now there is a lack of courage to discuss the issues we are facing in this service. If we do not do this, the service will not grow or be sustainable," Borg said.

He agreed that the service needed to be regulated by either a Public Service Obligation or a service agreement to establish an agreed upon  schedule and tariff if need be.

A representative from the organisation that represents Gozitan students raised concerns about the lack of direct bus routes to and from the ferry.

The next sitting willl take place on June 27, where representatives from the two fast ferry operators, Gozo Tourism Association, Gozitan workers association and an official from transport Malta will testify.