Hackers who have threatened to leak “valuable” Nationalist Party documents have extended their deadline for another eight days.

The PN has now been given a further 192 hours, or eight days, to "communicate and cooperate" with them or have the data released online. But the party insists it will not negotiate with criminals and has no intention of changing its stance.

Last week, the PN revealed it was the victim of an attack on its IT systems and said that hackers may have obtained information on its servers.

The operators of ‘Avaddon ransomware’ subsequently published a selection of documents, including employee details, passport pictures and a studio rota on the dark web - a part of the internet that is not indexed by search engines and requires special software to access.

A PN source confirmed to Times of Malta that the leaked documents appear to be genuine PN data and said that the hackers had made an attempt to negotiate with them.

Originally the hackers gave the party 240 hours, or 10 days, to “communicate and cooperate”. That deadline expired on Thursday, when hackers posted that the next update was "coming soon." 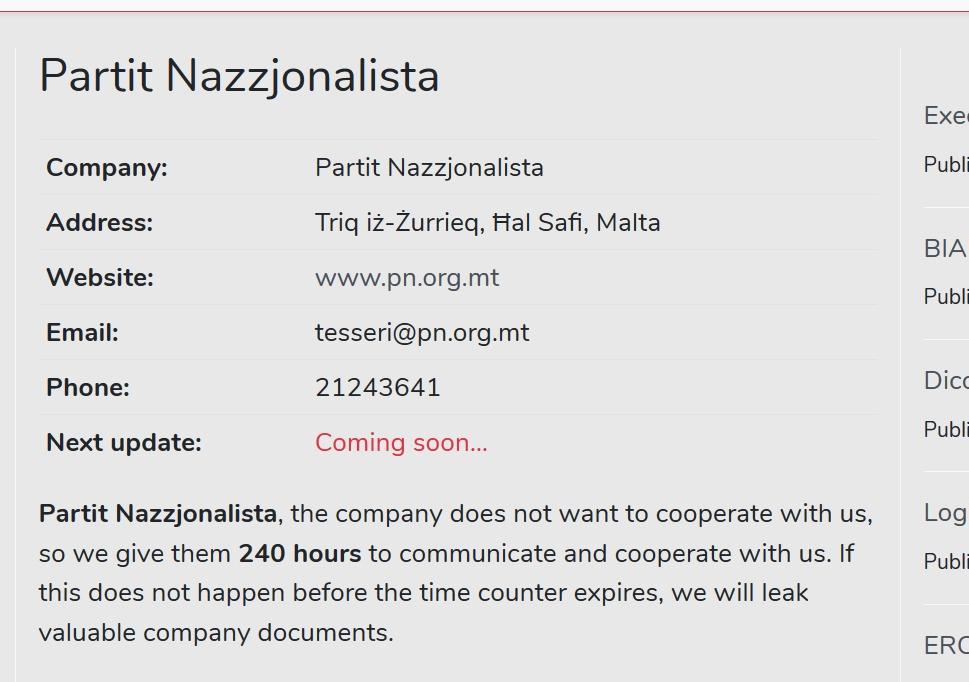 On Friday, the hackers uploaded a file MiB (management information base) file titled ‘pn.org.mtkuntatt_Leak7’. The file leads to a ‘500 server error’ when clicked, meaning that there is a problem with accessing the server or file system.

Hackers said that now they would give the PN a further 192 hours for the party “to communicate and cooperate with us.”

"If this does not happen before the expiration of the time set on the time counter we will completely leak valuable company documents," they said.

Hackers have also threatened to carry out what is known as a DDoS attack on the PN site. A DDoS attack is an attempt to take a website offline by overwhelming it with internet traffic.

The group’s threat is known as "triple extortion" as it involves the threat of extortion, data theft and disabling a website.

A PN spokesperson said: “Hackers have now given us a new deadline on basis that we’re not cooperating with them. This expires today week at midnight. We stand firm by our position of not communicating with them or negotiating with criminals.”

Correction: Amended to reflect that the hackers' deadline was extended by eight, not seven, additional days.