Hackers have threatened to leak "valuable" Nationalist Party documents, unless the party agrees to "communicate and cooperate" with them in 10 days.

The operators of 'Avaddon ransomware' have already published a selection of documents, including employee details, passport pictures and a studio rota on the dark web.

A party source confirmed to Times of Malta that the documents appear to be genuine PN data and that the hackers have made an attempt to negotiate with them.

On Monday night, the PN revealed it was the victim of an attack on its IT system and that some of its information may have been accessed.

In a post on the dark web claiming responsibility for the attack on Monday, the hackers said they would give the PN 240 hours to “communicate and cooperate with us”.

“If this does not happen before the time counter expires, we will leak valuable company documents,” it says. 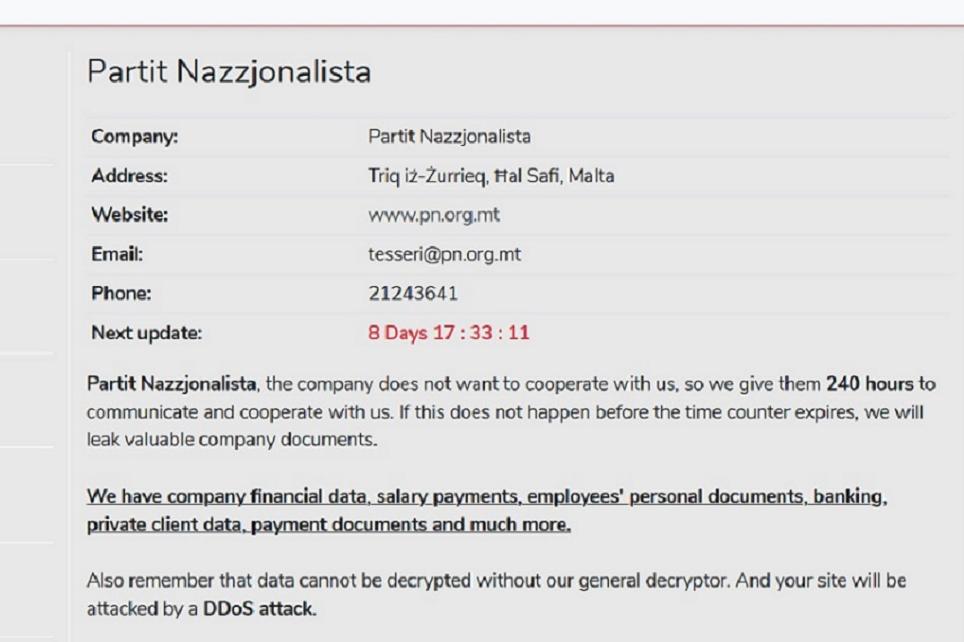 It also warned that it would carry out what’s known as a DDoS attack, which is an attempt to take a website offline by overwhelming it with internet traffic.

The group’s threat is known as ‘triple extortion’, involving the threat of extortion, data theft and disabling a website.

A party source confirmed the information posted on the dark website appears to be genuine PN data.

The source said the scale of the attack is yet to be established. Police are expected to visit PN HQ as a magisterial inquiry led by Victor Axiak is under way.

The source also confirmed the hackers had attempted to negiotiate, but did not elaborate on what amounts of money they are asking for.

A PN spokesperson said: “What happens in these cases is that the hackers attack the system and then demand a ransom. We are not in contact with the hackers and there is an inquiry looking into this issue.”

After announcing that its IT system was attacked, the party said it had taken immediate action to contain the damage and informed the data commissioner and the police so that they could investigate.

In April, last year the commissioner launched an investigation after a database containing 337,384 records of Maltese voters' personal information was leaked after it was reportedly left exposed by a Maltese IT company whose owners had links to the Labour Party.