This is the first article in a series on applying actuarial techniques to understanding the spread of the novel coronavirus in Malta.

On March 7, the first three cases of coronavirus were reported in Malta. At the time of writing (March 16) the number of total cases to date is 30, two of which recovered. This series of articles will apply actuarial techniques in a simple form, to explain the onset of this virus in Malta.

One important caveat is that any prediction is bound to be incorrect for a number of reasons:

In a real-life assignment, trying to predict this would involve consulting a team of healthcare experts and possibly having some more granularity in the data.

This first article will link what is happening to Markov chains. Let me start by explaining the key concepts.

The base example of a Markov chain would include three possible states: healthy, sick and dead. The arrows in the state-space diagram would show the possible movements over a period of discrete time. Once dead, you are bound to be dead the next day/month/year. If you are healthy, in most likelihood you would be healthy the next period, so that arrow should have a high percentage. 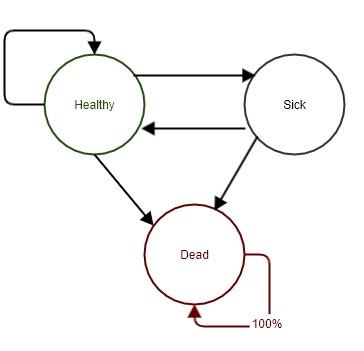 In this case, we are identifying coronavirus cases and hence we should consider death by coronavirus as a separate outcome. We also add the state representing persons who were sick from coronavirus and recovered. We consider these as immune to COVID-19. A research study based on 1099 cases suggests the best approximator for the proportion of deaths (1.4%) but this ranged up to 4% in other reported statistics. Professor Victor Grech uses 2% in his analysis for Malta.

The rate for the Markov model would be smaller, as it would evaluate the death over a period (for example if the death rate is 2% and people spend twenty days sick, it could be 0.1% per day if uniform [it is not]).

At the time of writing (March 16), we have 28 sick and two immune people that we are aware of in Malta. 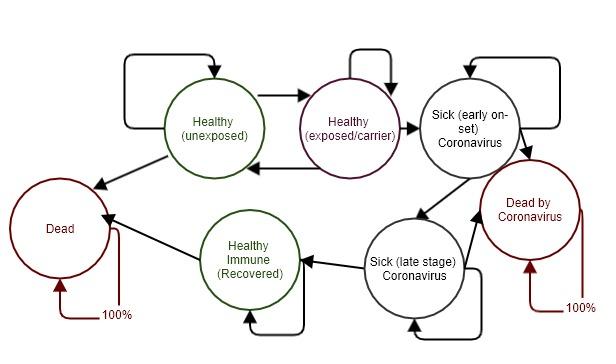 The next stage would be to subdivide the sickness by coronavirus in two stages – early-onset and late-stage in the sickness. For simplification, I assume that early-on always leads to the late stage.

Finally, we should consider that not all healthy individuals are at the same risk. Some of them are already exposed to the virus and possibly a carrier. This group puts the others at risk – up to two weeks following being exposed. A study published last week showed that the transmission is much higher during the first few days of exposure and sickness.

This leads us to a final Markov chain, with seven states. Ideally this has more states and varies by age group, as we know that the elderly and weak are at higher risks. I am also assuming that healthy recovered immune individuals are not carriers.

We know that we have 28 sick, about half in each stage, and two that are immune. The key concern is: how many are carriers?

The UK has followed an approach of having carriers/exposed that are low-risk groups in order to create so-called herd immunity, basically creating a link between healthy (exposed) to healthy (immune) or assuming low-risk people go through the cycles of sickness quickly, with little to no deaths. On the other hand, most other countries are focused on flattening the curve – reducing the number of unexposed to exposed and hence sick.

The rationale is that many will get sick anyway and the problem is that the healthcare system cannot cope with all getting sick at the same time. This goes hand-in-hand with the hope that the virus might calm down once the weather improves and a vaccine might be eventually created.

As for the time period, I am working on two, four and seven-day intervals. The rationale is that it seems that half of the cases have that gap from exposure to the virus to the manifestation of the sickness.

The level of uncertainty for the estimates is quite high, so any estimate is bound to have some errors.

On the plus side, we should be having more recoveries too – one to four more by Wednesday.

As for the number of deaths – hopefully none.

Dominic Cortis is a University of Malta lecturer and actuary. Find him on LinkedIn.