Last updated at 4.54pm with reactions in parliament

Hunters are to be handed management of the Miżieb and Aħrax woodlands in Mellieħa, with terms of the agreements kept hidden from councillors and environmental activists.

The government’s plans, first exposed in April, will come to fruition at a signing ceremony to be held at the Miżieb woodlands’ car park on Sunday at 4pm, an invitation sent out by hunters’ federation FKNK reveals.

Infrastructure Minister Ian Borg, Environment Minister Aaron Farrugia and parliamentary secretary Chris Agius will be attending, the invitation states, with the deal to be signed between the FKNK, Lands Authority and environmental regulator ERA.

Mellieħa councillors and activists opposed to the plans say they have never been shown details of this agreement or consulted about it.

“How can we be present at this event without having any knowledge of what is being agreed upon? Have other organisations been consulted about this agreement? And if so, why not the local council?” Mellieħa councillor Gabriel Micallef told Times of Malta.

The council's minority leader, Ivan Castillo added: "How can I ever accept an invite from an authority that treats myself and fellow councillors as well as the residents of Mellieħa, who we represent with such disrespect!"

While the invitation seen by Times of Malta refers to Miżieb, sources confirmed that the government and FKNK had also reached a similar deal for Mellieħa’s Aħrax.

Hunters were already permitted to use both areas as hunting grounds during open season, which stretches from the start of October to the end of January. 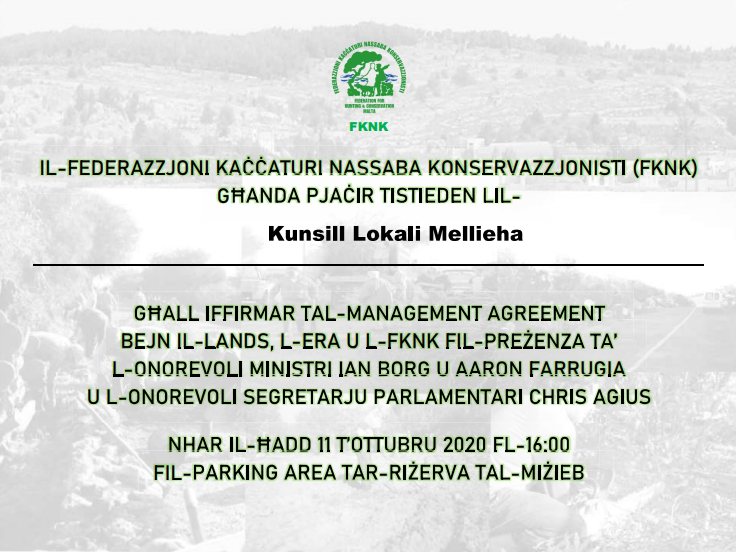 The invitation sent to the Mellieħa Local Council

An Environment Ministry spokesperson said that it was the Lands Authority – which falls under minister Ian Borg’s remit – which was responsible for any deals concerning the Miżieb woodland or Mellieħa’s Aħrax woodland, which it said “are subject to a separate agreement with the Lands Authority.”

The spokesperson said that the ministry had only gotten involved to reach a deal with the FKNK “to guarantee certain environmental safeguards and access to sites”.

It provided no further details of those safeguards.

Environment Minister Aaron Farrugia told Times of Malta that details would be given at a separate press conference "in the near future".

Sources within Borg’s ministry confirmed that the plan was to hand management of the woodlands over to the FKNK.

Lawyer Claire Bonello, representing the coalition Spazji Miftuħa said the agreement was a “disgusting, undemocratic and selfish” attempt at a land grab.

“We have a double whammy of the largest stretch of land being handed off to one lobby group in an untransparent manner, while that group has clearly not observed the law,” Bonello said.

“The Planning Authority and our ministers are becoming accomplices in allowing these irregularities to persist.”

In a statement later, Spazji Miftuħa said the government is gifting
public lands to an entity that has taken more from our country then it
could ever possibly return." This sends out the message that in Malta you can
be unaccountable for your actions and even be gifted if this is gainful for the
politicians on election day," it said.

"The prime minister must start to realise that political gain is by far
not a justification to abuse our country’s resources and that if he remains
insensitive to these issues he will be remembered as the leader that had no
regard to our nature and cultural heritage," the group said.

Plans to hand woodland areas to hunters to manage were first exposed in April and immediately prompted widespread concern among environmentalists and nature activists.

In June, Spazji Miftuħa presented a dossier documenting all the irregularities and illegally built structures, including aerial photography, to the PA, the Environment Minister as well as the Prime Minister, Bonello said, however these continue to be ignored. 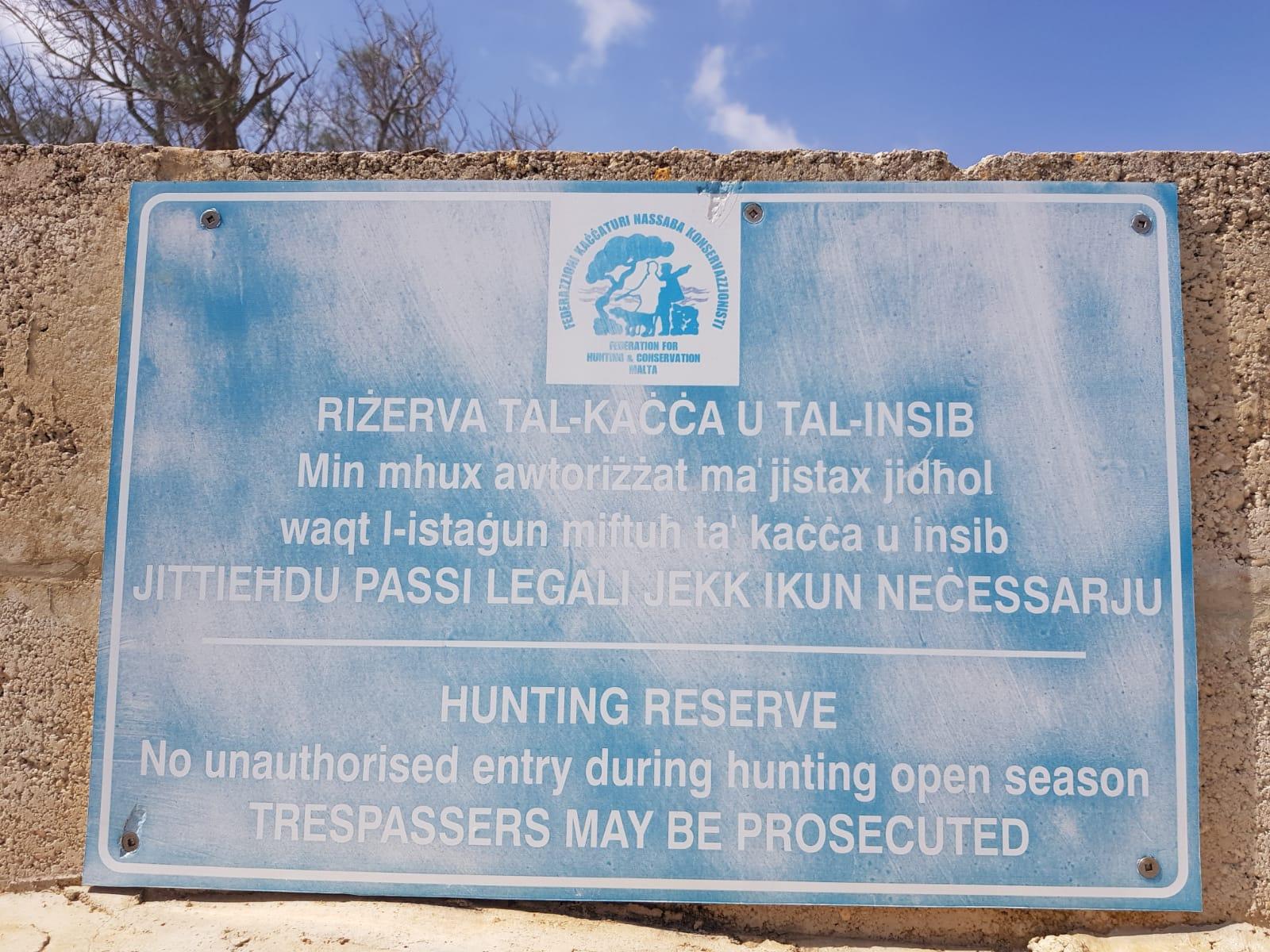 “We are supposed to be placated with this false equivalence that the government has also granted guardianship agreements with other lobbies. Frankly, it is absolutely not the same,” Bonello said.

“The organisations represented in the coalition contribute to nature, not take away from it and they certainly do not restrict access to the sites entrusted to them.”

“We have been asking for guardianship agreements for far smaller tracts of lands for years and we are ignored and kicked up the road. These are buildings that we want to restore and are funded entirely through donations.”

According to Spazji Miftuħa, the area of Miżieb and l-Aħrax is five times larger than the Buskett woodland and 150 times the size of the Floriana Granaries.

They argue that handing off the entirety of the site to the hunting lobby would restrict public access to the land to just three months a year during the summer months, a period which is unsuitable for hobbyists who enjoy trekking or camping in the area.

“It is the duty of the government to enforce the law and ensure public access and it has not done so. This is a vote of no confidence in our environment and the public’s enjoyment of open spaces,” Bonello said.

Management of the Miżieb woodland has long been hotly contested. The FKNK maintain that Miżieb is already a hunting reserve, citing a 1986 letter sent by then Prime Minister Karmenu Mifsud Bonnici who, in the run-up to the general election, had handed the area over to hunters for use as a hunting area.

Conservationists insist that hunters have no legal rights to the land and that it is enjoyed widely by families cyclists and ramblers.

A public petition started in April to have unrestricted access to the public woodlands had amassed over 17,000 signatures at the time of writing.

PN wants to see the contract

The Nationalist Party criticised the government for having failed to consult local councils about the woodlands agreement. It called for the publication of the agreement and said it would comment further at that stage. It added, however, that it was against closing off access to public land other than for established scientific reasons.

Gozo Minister Clint Camilleri, who is the minister responsible for hunting, was questioned about the deal in parliament and cast doubts about whether the agreement had been sealed or not.

Replying to questions from the shadow minister for the environment, David Thake, who asked for the terms of the agreement, Camilleri said that talks were still underway, and any announcement would be made if an agreement was reached.

When Opposition MP Robert Cutajar asked if there would be a ministerial statement on the matter, various members of government distance themselves from the controversy saying that the invite had been sent by the FKNK.