Braving sea-surface currents, exhaustion, and jellyfish, a Maltese athlete is preparing to swim from Sicily to Malta in an epic challenge.

Neil Agius will set off from Pozzallo later this month and plans to cover 95km before he arrives home in Sliema.

“It should take around 33 hours, almost completely non-stop,” he said on the latest episode of the #Timestalk podcast.

Neil has a three-day window between June 26-29 when weather conditions should help him make the crossing safely.

The feat has only been completed once before, back in 1985 when athlete Nicky Farrugia completed the challenge, arriving in Gozo after 30 hours and 17 minutes at sea. 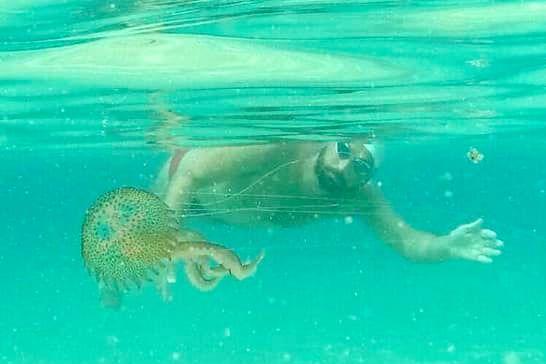 Neil Agius gets up close and personal with a jellyfish as part of his training. Photo: Neil Agius/Facebook

Agius will be joined by a 16-member crew which includes an umpire, a navigating boat, a team who will prepare his food, as well as a couple of swimmers who will do part of the route with him for morale support.

This of course leaves him open to jellyfish stings and currents are also a worry. However, he says it’s the mental challenge that really concerns him.

"It's 70 percent your mindset. You have to be careful not to dig yourself into a hole, or you might not get out of it. I try and meditate and go into a kind of trance. It's super quiet out there so you just hear the sound of the water swishing as your arms move in and out."

The athlete from Għargħur is trying to raise awareness for the environmental campaign #waveofchange, which campaigns against plastic in the sea, plans to swim for 30 minutes at a time and then take a minute and a half break. During this break he'll have water and energy-rich food which includes liquid meals, bananas and bread.

The 34-year-old has been swimming since he was seven and represented Malta in the 2004 Olympic Games in Athens. In 2018 he swam 70km around Malta and a year later he swam 37km around Gozo.

Now he wants to cross the 95km from Sicily to Sliema pitch. "I chose this route as I want to finish at home," he adds.

"I've been training six times a week, mainly swimming and Pilates. Obviously because of COVID19 restrictions I couldn't train in the pool, so I had to adapt my programme to the sea. All the really long ten and twelve hour swims are done."

Also on this episode of the podcast, we attended the Black Lives Matter protest which took place in Valletta on Monday night and hear from some of the protestors who were there.