The Gozo Ministry used the services of the illegal concrete batching plant operating without any permits to repair a road last month, Times of Malta can reveal.

Concrete produced by the illegal batching plant, owned by a group of businessmen  headed by construction magnate Joseph Portelli, was last month procured through a direct order from the Gozo Ministry.

Tons of cubic metres of concrete was used in an emergency project to fix a road leading to Ramla Bay in Nadur, after dangerous gaping holes were spotted by passers-by at the start of September.

Pictures published by the Gozo Ministry, in which Minister Justyne Caruana is seen inspecting the ongoing works, show one of the ready-mix trucks owned by the batching plant owners pouring concrete into the road project. Times of Malta is informed that one of the owners of the illegal batching plant, Anthony Bugeja, known as Ix-Xrik, was given a direct order by the ministry to carry out all the excavation works related to the road project.

Ministry sources also confirmed that all the concrete used in the project was loaded onto Mr Portelli’s trucks from the plant and supplied directly to the Nadur project.

The ministry paid tens of thousands to the plant operators for the concrete supplies.

One of the pictures published by the government shows Dr Caruana on site discussing the project with Mr Bugeja.

Asked to confirm that the ministry procured concrete from the illegal batching plant for its Ramla road project, a spokesman avoided a direct answer.

Refusing to name the beneficiary of the direct order, its value or to confirm that the project’s concrete originated from the illegal batching plant, the Gozo Ministry said: “Emergency works were carried out according to practice and standards established after obtaining the appropriate approval”.

The spokesman added that the majority of works were carried out by ministry employees and the contractor was engaged to do excavation works.

No action has been taken yet to close the plant despite footage by Times of Malta showing the flagrant abuse of the site.

The land in question, including the quarry where the illegal operation is taking place, is public property owned by the Lands Authority and is also covered by a separate enforcement order for illegal quarrying. 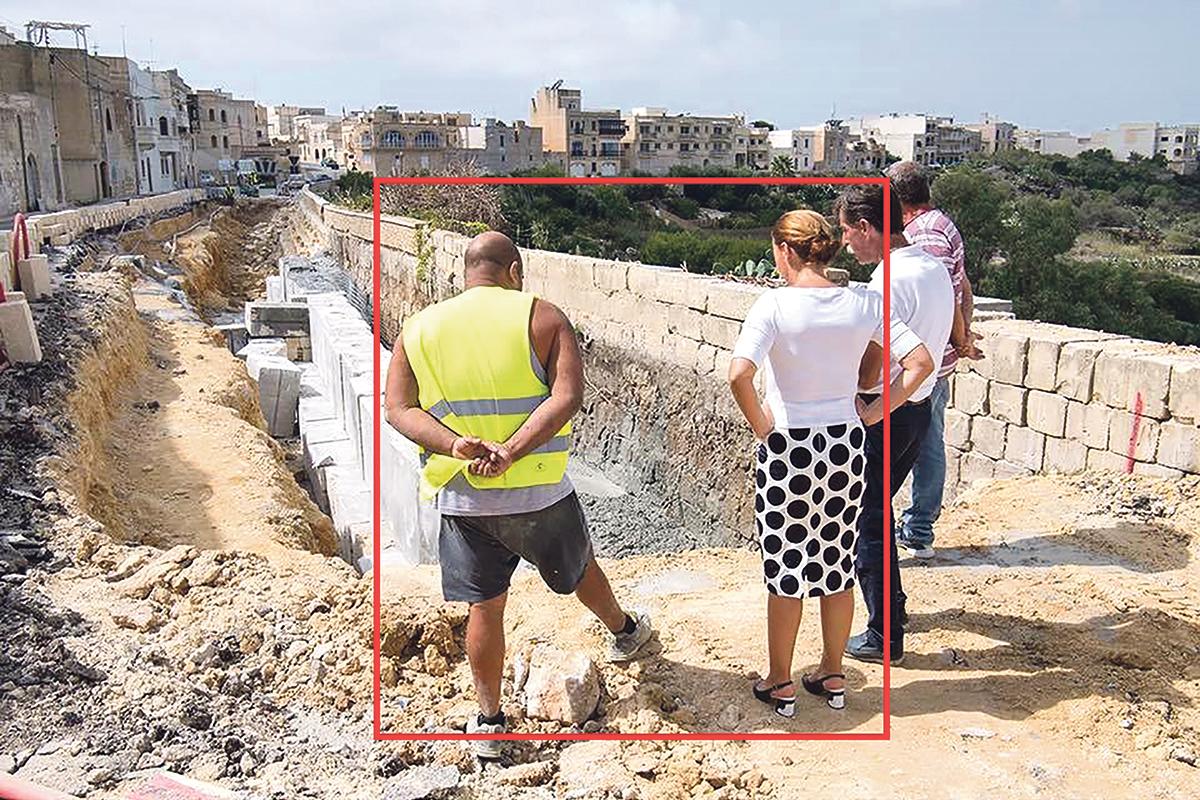 Gozo Minister Justyne Caruana discussing the works with Anthony Bugeja, one of the owners of the illegal batching plant.

Despite enforcement and stop notices by the Planning Authority to halt the assembly of the illegal batching plant, its owners have continued operating without any hindrance from the authorities

So far, despite enforcement and stop notices by the Planning Authority to halt the assembly of the illegal batching plant, its owners have continued operating without any hindrance from the authorities.

The police did not reply when asked whether they had been called in by the authorities to intervene.

In a statement, the Malta Developers Association called for a “reasonable” planning policy on batching plants in order for those in breach to regularise their position.

While acknowledging that a considerable number of plants were operating illegally, the MDA said that it would be defeating its own mission were it to  accept such situation as if it was the norm.

“There is no doubt that such plants cannot be situated in development zones and, therefore, their siting can be controversial. The problem is that there is no established policy regarding these plants,” developers said.

However, the MDA said such plants constituted a vital industrial activity for the construction industry.

“Taking up land for industrial use to create employment has always been considered justified by different administrations so as to generate employment. Concrete batching plants should not be considered as an exception to this norm,” the statement read.

In view of this developers urged the Planning Authority and the Government to ensure that a reasonable policy for concrete batching plants is established.

“This would enable owners of existing plants that are not in breach of the policy to regularise and sanction their activity after payment of fines that are normally due in such circumstances,” the MDA said.