When Elena Azzopardi opened her Sliema salon on Friday to welcome her first customers after 10 weeks, she had already had a busy morning.

As well as setting up safety signs, perspex partitions and sterilizers, she had laid out disposable towels and aprons for her clients. "I've definitely spent hundreds of euros on new protective equipment," she said.

Hundreds of hairdressers and restaurants reopened on Friday morning, but many say they were not given enough time or clarity from public health officials on new COVID-19 regulations.

On Monday the government announced the estimated 1,000 salons could reopen as long as they adhered to new health and safety measures. However, many salon owners say they are confused by the guidelines.

"It's been very chaotic. We weren't given enough time to order protective equipment such as perspex dividers which can be placed between clients," said Ramon Vella, a Sliema salon owner and a member of the Health and Beauty Federation Malta.

After being closed for 10 weeks, salon owners will now have to work even harder to meet the demands of their clients, Vella said. He himself will now open six instead of five days a week to try and make up for the shortfall.

He has also had to restrict appointments to colour and cut only and will not be able to serve clients who want a wash and blow-dry only.

On Friday there were reports that some salons were charging clients more for the usual cut or colour.

Vella said that while he was not personally aware of any salons doing this, some might be charging more because they need to use extra dye for regrowth.

He said salons were also meeting next week to ask the government for funding for the money they’ve spent on protective gear.

Depending on the size, many salons will only be allowed to treat one customer at a time because of distancing rules.

"It feels like we're opening for the first time," he said. "We're still trying to understand the government's recommendations, which were not yet finalised by Thursday. For example, at first we were only allowed to serve people outside, but then we were told we could also use our inside space, so we had to prepare for that."

Attard and his team spent Thursday retraining to make sure everyone was aware of the new protocol.

They also chose to fumigate the entire café and deliveries to make their staff feel safer. The staff's temperature will be checked before they start a shift and they will have to wear masks at all times.

However, customers will not have their temperatures checked, nor do they have to wear masks. The number of patrons per table will be restricted to six, and smokers must stand 10 metres away from the dining area.

"We're taking things slowly," Attard added. "It feels like we are starting from scratch. But we have to open because people need jobs. We're trying to be optimistic, but since we have to space out our tables, we now can only have half the number of customers we used to." 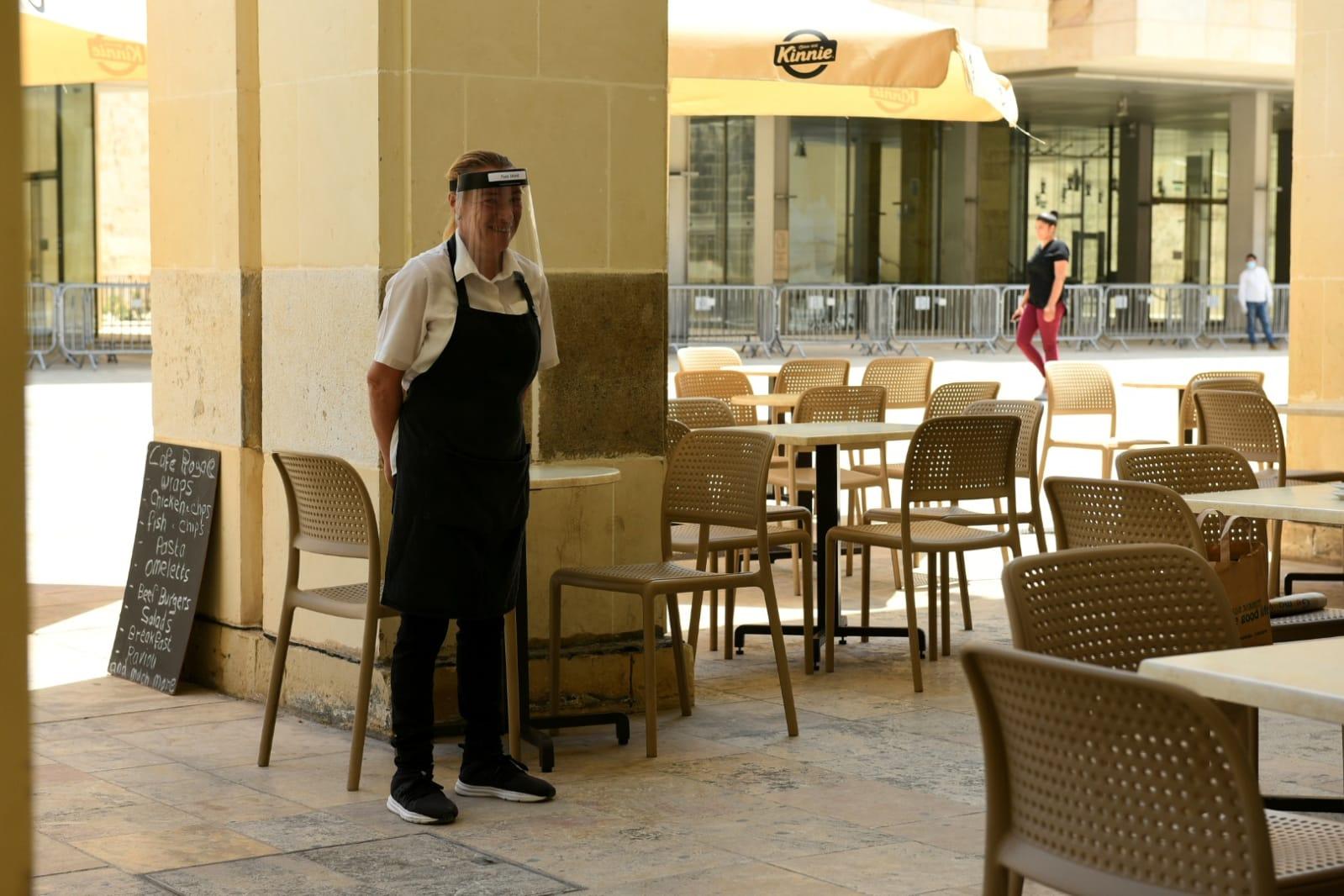 A waiter waits for customers at a restaurant Valletta on Friday PHOTO: Chris Sant Fournier

While the streets of Sliema were busy, some cafes in Valletta were deserted at lunch time, with waiters dressed in protective gear, standing idly with no one to serve.

They were no doubt waiting for the evening crowd to arrive and people to slowly return from home cooking to restaurant life.