Democrat Joe Biden has won the White House, US media said Saturday, defeating Donald Trump and ending a presidency that convulsed American politics, shocked the world and left the United States more divided than at any time in decades.

CBS, NBC and CNN news networks announced the result just before 11:30 am (1630 GMT) as an insurmountable lead in Pennsylvania took Biden, 77, over the top in the state-by-state count that decides the presidency.

"America, I'm honored that you have chosen me to lead our great country," Biden said in a statement.

"The work ahead of us will be hard, but I promise you this: I will be a president for all Americans — whether you voted for me or not. I will keep the faith that you have placed in me."

Trump quickly responded to the announcement by accusing Biden of falsely declaring himself the next president.

"We all know why Joe Biden is rushing to falsely pose as the winner, and why his media allies are trying so hard to help him: they don't want the truth to be exposed," Trump said in a statement.

"The simple fact is this election is far from over."

For Biden, who got more than 74 million votes, a record, the triumph after a tense contest conducted during a global coronavirus pandemic was the crowning achievement of his half century in US politics, including eight years as deputy to the first Black US president Barack Obama.

The result condemned 74-year-old Trump -- who made frantic attempts to claim fraud and stop the vote count -- to becoming the first one-term president since George H. W. Bush at the start of the 1990s.

The Republican, whose marathon press conferences, tweeting and raucous campaign rallies have made him a perpetual, noisy presence at home and abroad over the last four years, had no immediate reaction.

But ever since the night after Tuesday's election, when he prematurely claimed victory, Trump has been inhabiting a world increasingly disconnected from the reality of his approaching downfall.

Earlier Saturday, he left the White House for the first time since Election Day to play golf, tweeting: "I WON THIS ELECTION, BY A LOT!"

And in an extraordinary White House address to the nation on Thursday -- with Biden's lead in the partial results already consolidating rapidly -- he claimed "they are trying to steal the election."

Despite Trump's protests, the returns from vote counting offices around the country kept coming all week, with no credible reports of irregularities.

And when US television networks declared that Biden had taken an insurmountable lead in Pennsylvania, that put the Democrat over the magic number of 270 electoral college votes. Trump had no way back.

Networks later also called Nevada for Biden, pushing him to 290 electoral votes and on track for 306, the same amount Trump claimed in 2016.

The biggest ever turnout of voters -- some 160 million people, according to preliminary estimates -- poured out across the United States, ultimately favoring Biden's promise of calm to Trump's rollercoaster.

An old school centrist, Biden has fended off the energetic leftist wing of his party, while choosing Kamala Harris, the first Black woman on a major party presidential ticket, as his running mate.

Although a career politician -- a widely derided group today -- he is seen by many as a sympathetic character, humanized by having endured the loss of his wife and baby daughter in a car accident in 1972, then another son to cancer four decades later.

Yet despite his fervent promises to restore America's "soul," Biden will inherit a shaken, angry country.

Americans are bitterly split after an election campaign in which Trump deliberately stoked divisions over many of the country's most sensitive issues, including race, immigration and gun ownership.

And despite critics painting Trump as an aberration, he still won the votes of around 70 million people -- many of whom may not have liked Trump himself, yet consider Democrats as being out of touch with their traditional values.

That gulf in understanding between two Americas will likely continue to rage in Congress, threatening Biden's ability to govern at a time of economic upheaval and an accelerating coronavirus crisis.

For Trump, the defeat and his exit from the White House at the transition on January 20 will above all be a story of personal humiliation.

He shocked the country and the world when he stormed to victory in 2016 as a political newcomer taking down the seasoned Democrat Hillary Clinton in his first shot at public office.

Then for much of his administration he appeared invulnerable to the normal laws of politics. 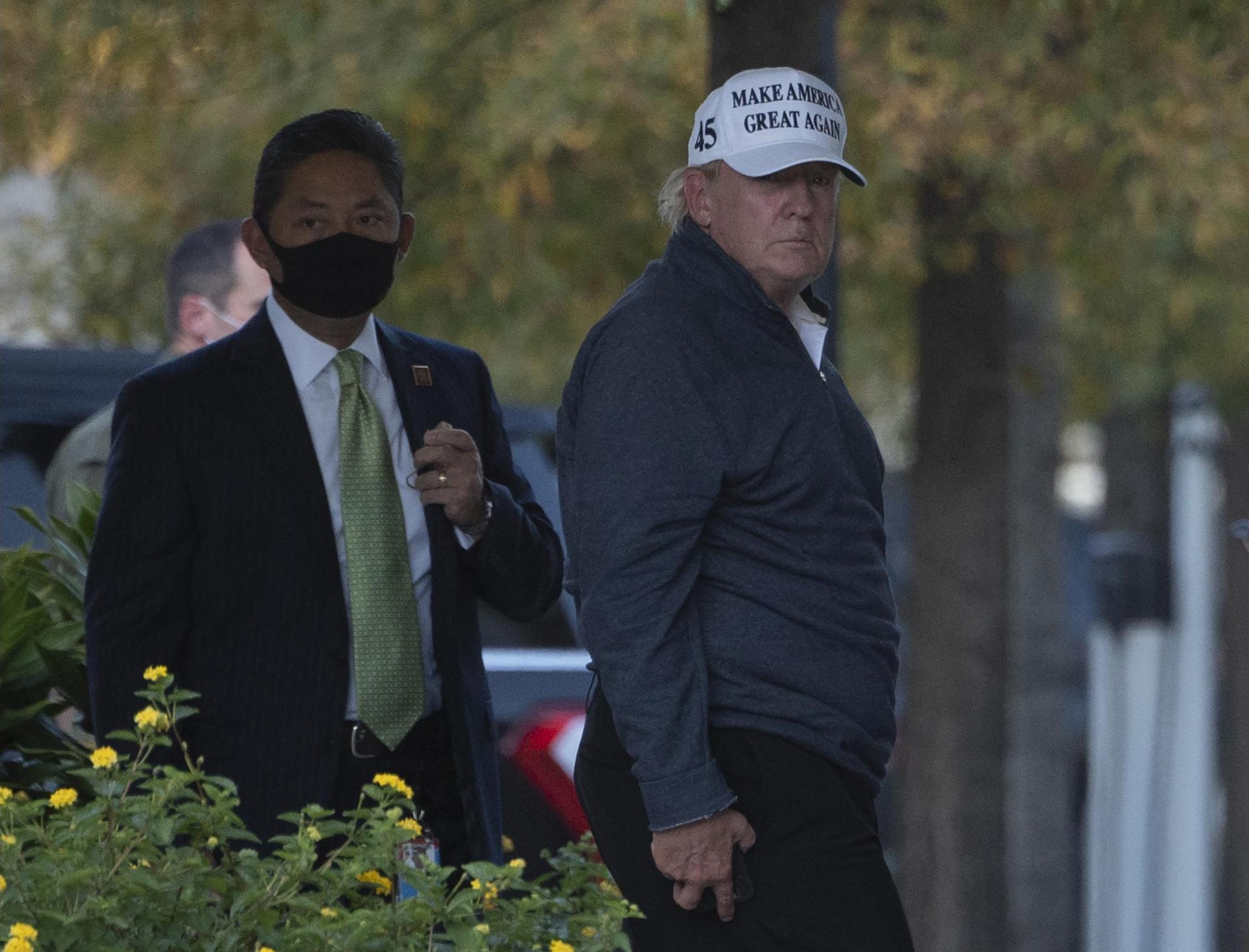 Donald Trump returns to the White House from a round of golf following Biden's declaration of victory. Photo: AFP

His showbiz style of running the government made him perhaps the most watched -- and controversial -- individual on the planet.

He survived impeachment, tore up diplomatic norms, and was so omnipresent in the media that he lodging himself in the consciousness of ordinary Americans in a way never previously experienced.

A former reality TV star and celebrity real estate developer, he gave the impression of someone who always got his own way.

To crowds at rallies he loved to boast "we're going to win so much, you're going to be so sick and tired of winning." And to people he didn't like, his go-to insult was "loser."

Yet now he's a loser himself -- as perhaps he already feared on the morning of the election.

"Winning is easy," he mused as polls opened. "Losing is never easy. Not for me."

Biden secured his win by recapturing the Midwestern states of Pennsylvania, Michigan and Wisconsin -- traditional Democratic territory that Trump had flipped in 2016 with his powerful appeal to white, working class voters.

The Democrat was also running slender majorities as vote counting approached an end in Arizona and Nevada, while the tally in Georgia was so close that the state declared it would hold a recount.

But it was the capture of Pennsylvania that sealed the deal, meaning that even if Trump somehow won all the other unannounced states he still wouldn't accumulate enough electoral college votes.

Biden built his campaign on driving inroads into Trump's working class base, while selling himself to the rest of the country as the responsible, steady leader needed to confront the COVID-19 crisis.

Rejecting Trump's erratic, often cavalier attitude to a virus that has killed more than 230,000 Americans, Biden promised to follow scientific advice and take the tough decisions needed to try and halt the pandemic.

He took a gamble, politically speaking, by not holding the traditional kind of mass rallies that Trump used to great effect, insisting that he wanted to set an example by following government guidelines on social distancing.

His campaign even held back from knocking on doors -- another basic, even essential tactic for rounding up supporters that Trump's team embraced to great effect.

And in a climate of ferocious political partisanship, where almost every aspect of life is now seen through Democratic or Republican lenses, Biden pledged repeatedly to "be a president for all Americans."

In many ways, though, the election was less about Biden, making his third presidential run, than a referendum on Trump -- a figure of hate for opponents and open adoration to his supporters.

Some Republicans pleaded for Trump to expand his coalition with a more moderate pitch aimed at independent voters. But this most polarizing of presidents took the opposite tack, focusing his energy on super-charging his core base.

In the last weeks before the election, Trump addressed rally after rally with extreme, often entirely fact-free speeches. He painted illegal immigrants as murderers and rapists, claimed that Biden opposed God, and said Democrats would strip Americans of their personal firearms and allow mobs to destroy suburbs.

"We love you!" the crowds chanted back.

Confronted with pre-election polls that pointed to his coming defeat, Trump appeared genuinely unable to comprehend what was happening.

"Running against the worst candidate in the history of presidential politics puts pressure on me," Trump said.

"Could you imagine if I lose?"