Former prime minister Joseph Muscat has predicted the Maltese economy will contract “between 2.1 per cent and 12.5 per cent in 2020”, but will go back in positive territory in 2021.

An economic note prepared by 'the Office of Joseph Muscat' in April and published in full below, attempts to forecast the impact of COVID-19 on the island’s economy.

On Tuesday, Times of Malta confirmed the former prime minister, now a backbench MP, is advising the government on the coronavirus economic recovery plan.

Acknowledging that “the modern world has never before experienced such a synchronised and all-encompassing shock from both a health and economic perspective”, he sets out four scenarios for the economy.

Muscat's best-case scenario assumes there will soon be the widespread availability of reliable anti-body testing that would reveal that a relatively large part of the population is immune to COVID-19.

It also assumes tests confirm the level of immunity is quite high and long-lasting, and a vaccine will start to be rolled-out to the public by the end of this year. This implies that already in 2020, a large part of the population will be able to return to work.

“Under this optimistic scenario, the peak of the pandemic in Malta is projected to occur in the third week of April, with lockdowns starting to be partially lifted by the start of May.

“Domestic economic activity will start to slowly return to normal after around an economic lockdown of six weeks. Supply-side disruptions stemming from imports will last till the worse-affected economies start opening their manufacturing plants, which we anticipate being around ten weeks and affecting 15 per cent of manufacturing industries,” Muscat said in the report.

Following the worldwide roll-out of vaccines, economic activity and crucially the tourism industry is assumed to return to normal in 2021.

In this scenario, it is assumed that only a small proportion of the population will be immune to the infection and that the vaccine will only become available in mid-2021.

“With a fraction of the population immune to the COVID-19 virus, the infection rate will increase again in autumn and winter (second wave of transmission).

“However, with the health system and the population already prepared after the first outbreak, the outbreak will be manageable with less stringent lockdowns (with retail outlets remaining open, for instance),” the report reads.

On 2021 under this scenario, the year will see a weak first half with limited travel and partial lockdowns in the economy. Since the authorities are well-prepared, there will be no supply-chain restrictions on manufacturing, Muscat notes.

The economy at large, but mainly tourism and manufacturing, will be affected by lower external demand as the world-wide recession extends in 2021. 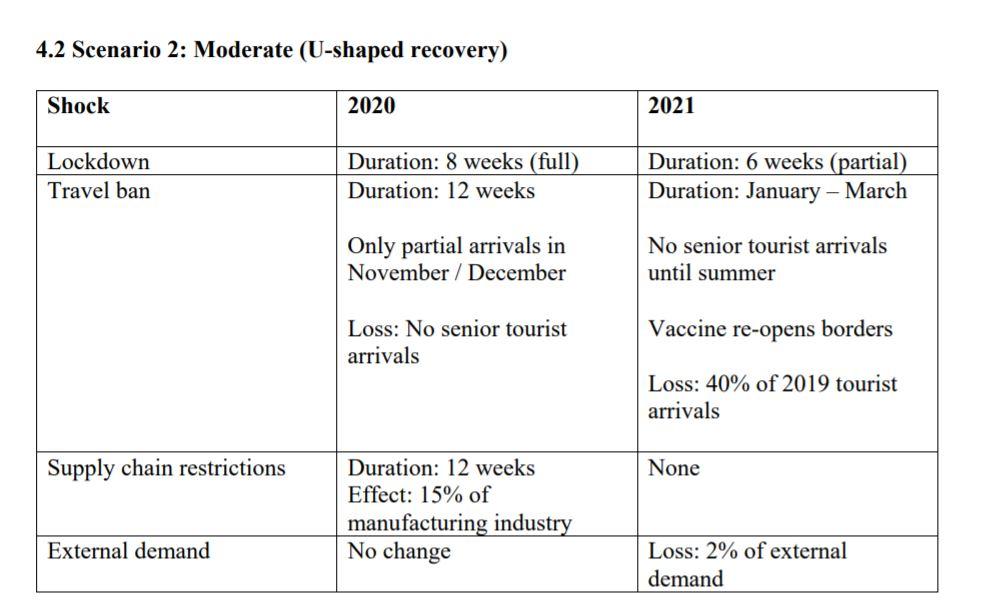 This outlook assumes a second outbreak during autumn and winter. This outbreak would not be manageable and lockdowns and travel bans in place up to spring of 2021 will be similar to the ones in place during the first wave.

"The roll-out of the vaccine in the second part of 2021 will result in a removal of lockdowns and travel bans, but foreign and domestic demand will remain subdued after more than a year of repeated lockdowns,” Muscat’s forecast suggests. 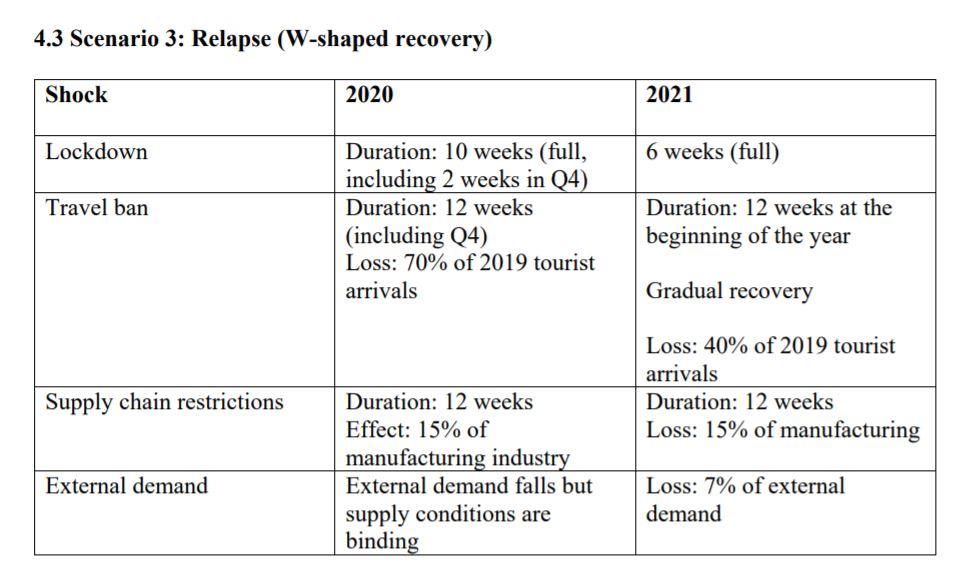 The main assumption of this worst-case simulation is that immunity guaranteed by anti-bodies gained through infection is short-lived and unstable, implying that lockdowns will only be completely lifted after the vaccine is rolled-out to the public.

“Mandatory quarantine will still be imposed on foreign travellers till Q3 2020. From Q4 2020 onwards, travel will be possible but severely restricted.

“Lockdowns in restaurants and accommodation outlets will be partial but will last until the third quarter of 2021. Import restrictions will become less severe but will affect manufacturing throughout the rest of 2020 and the first three quarters of 2021.” 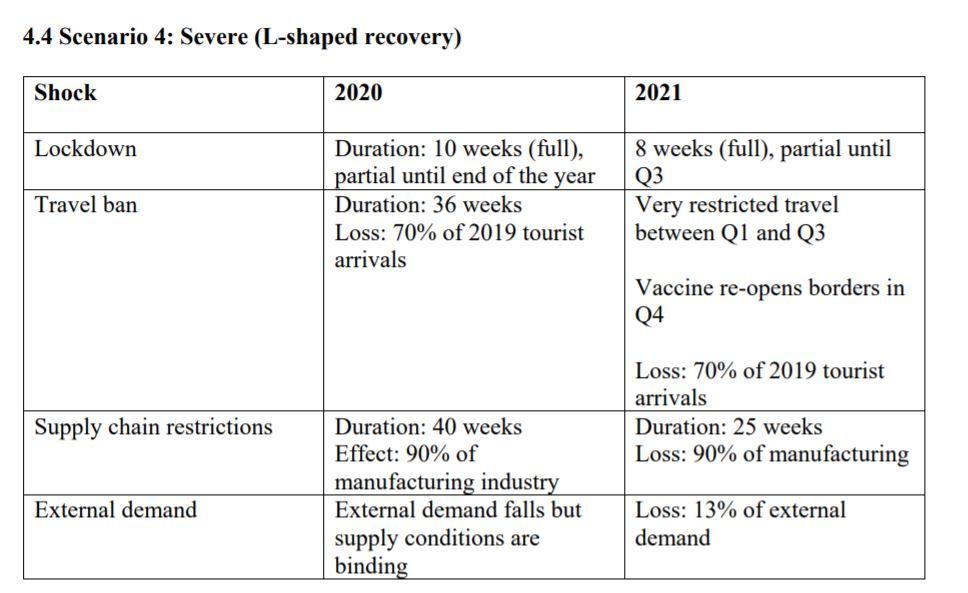 On GDP growth, Muscat’s report anticipates the Maltese economy will go back into positive territory "in all four" scenarios.

“In fact, even in the relapse scenario, there would be a very respectable growth of 3.3 per cent in 2021, obviously from a lower baseline. However, this would still leave the Maltese economy relatively divergent from the trend path that it was on pre-COVID-19.”

In the mild scenario, in 2021 the economy would recover the loss in 2020 and also achieve the projected growth, pre-COVID-19, anticipated for 2021.

In the moderate scenario, in 2021 the economy would recover the losses of 2020, but would remain well below the GDP level predicted for 2021 pre-COVID-19.

In both the relapse and severe simulations, there would be no recovery from the loss made in 2020 during 2021. Instead, further losses would be made.

“Input-output analysis suggests that the sector that is most likely to bounce back rapidly is retail trade, with a notable caveat to be made for the severe scenario,” the report states.

The telecommunications and information technology sectors are also expected to be “very quick to recover”.

Professional services, such as legal, accounting, rental, leasing and consultancy activities as well as financial services and manufacturing of non-essentials would take longer to recover.

“On tourism, the likelihood is that even under the most optimistic scenarios in 2021, this sector will globally and nationally be far below its previous path of growth. Even with the pandemic defeated, the substantial hit in disposable income in source markets will lower demand for travel significantly," he said.