A demonstration against a widespread disinformation campaign was held outside the Office of the Prime Minister on Tuesday, in a show of solidarity with journalists and activists.

Over the past few days, several websites, including those of TVM, Lovin Malta, Newsbook, Net News and Repubblika, were the target of copycat websites that carried fake stories.

The spoofs appear to be sowing doubt in the prosecution against Daphne Caruana Galizia murder suspect Yorgen Fenech.

Hours before the demonstration, a group that monitors threats to the media in the EU said it was "highly concerned" about these attempts to discredit Maltese journalism. 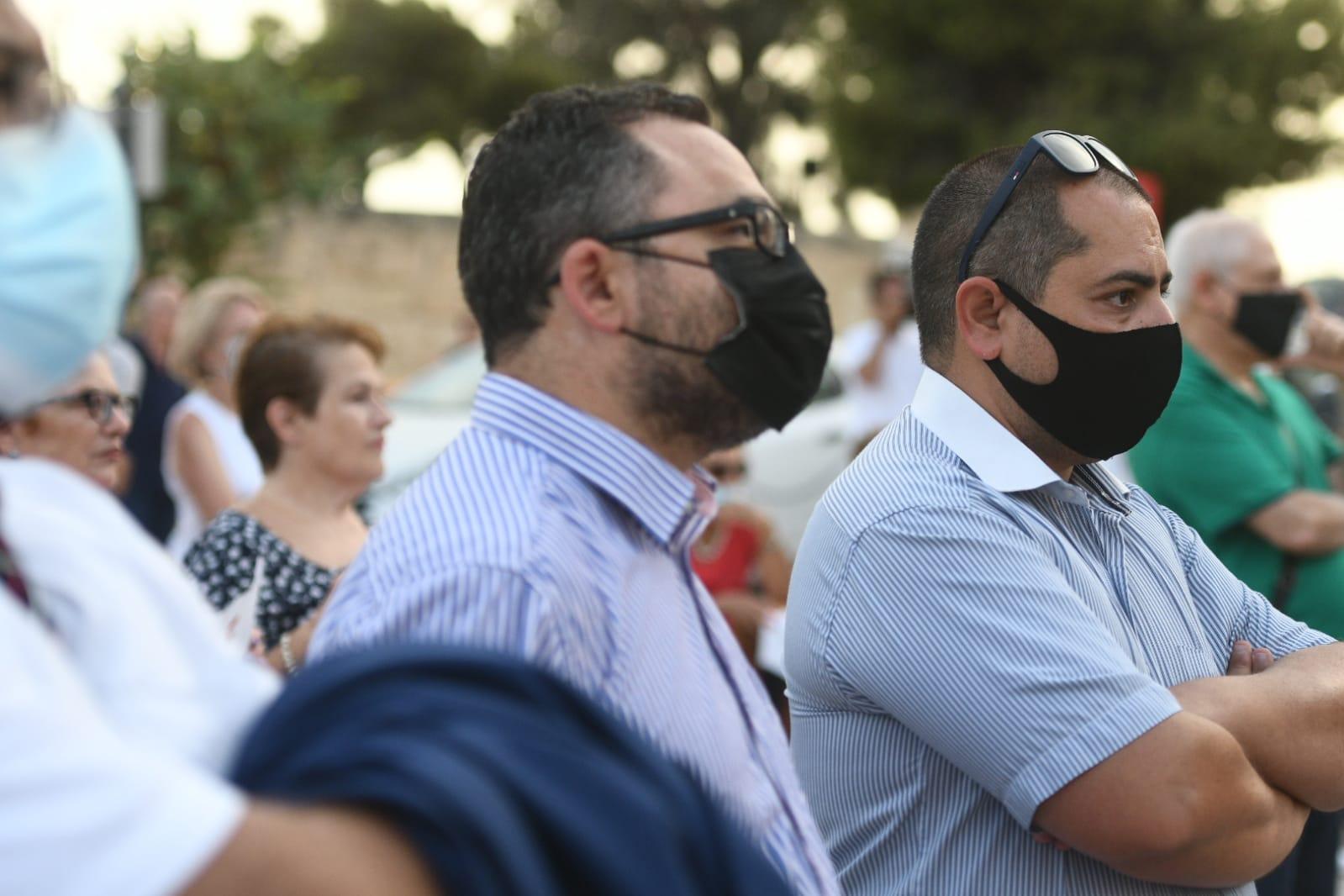 President of the Institute of Maltese Journalists and Times of Malta assistant editor Matthew Xuereb (right), and IĠM general secretary and MaltaToday online editor Kurt Sansone (left) were among those present for the protest. Photo: Jonathan Borg

Addressing scores of people who gathered in Valletta waving Maltese flags and placards denouncing organised crime, Delia said that while he had confessed to being afraid, he had turned a new page over the past few days.

The work of journalists, he said, was not for the faint-hearted. Nor was it a path chosen by those seeking riches or something to ingratiate themselves to the powerful or the wealthy.

Those who had gathered on Tuesday, he said, had responded to the call to support those seeking justice and those fighting for the public’s right to be informed.

'Turning back clock to time when press was not free'

Author and academic Immanuel Mifsud, who is also a founding member of the PEN Centre in Malta told the crowd that those seeking to silence someone must have something to hide.

Addressing those behind the disinformation campaign, Mifsud said that whoever they were, they were "turning back the clock to a time when the press was not free to publish what it wanted".

"Worse still, whoever is behind this is not simply seeking to stop the truth, but replace it with what is simply untrue."

Mifsud urged lawmakers to respect the public by respecting their right to be informed.

Repubblika president Robert Aquilina and his deputy Alessandra Dee Crespo closed off the demonstration with a warning that in the absence of a press that was free to report the whole unadulterated truth, the country could no longer be considered a democracy.

“The culture of intolerance towards independent journalism and free-thinking should no longer be tolerated,” Aquilina said. 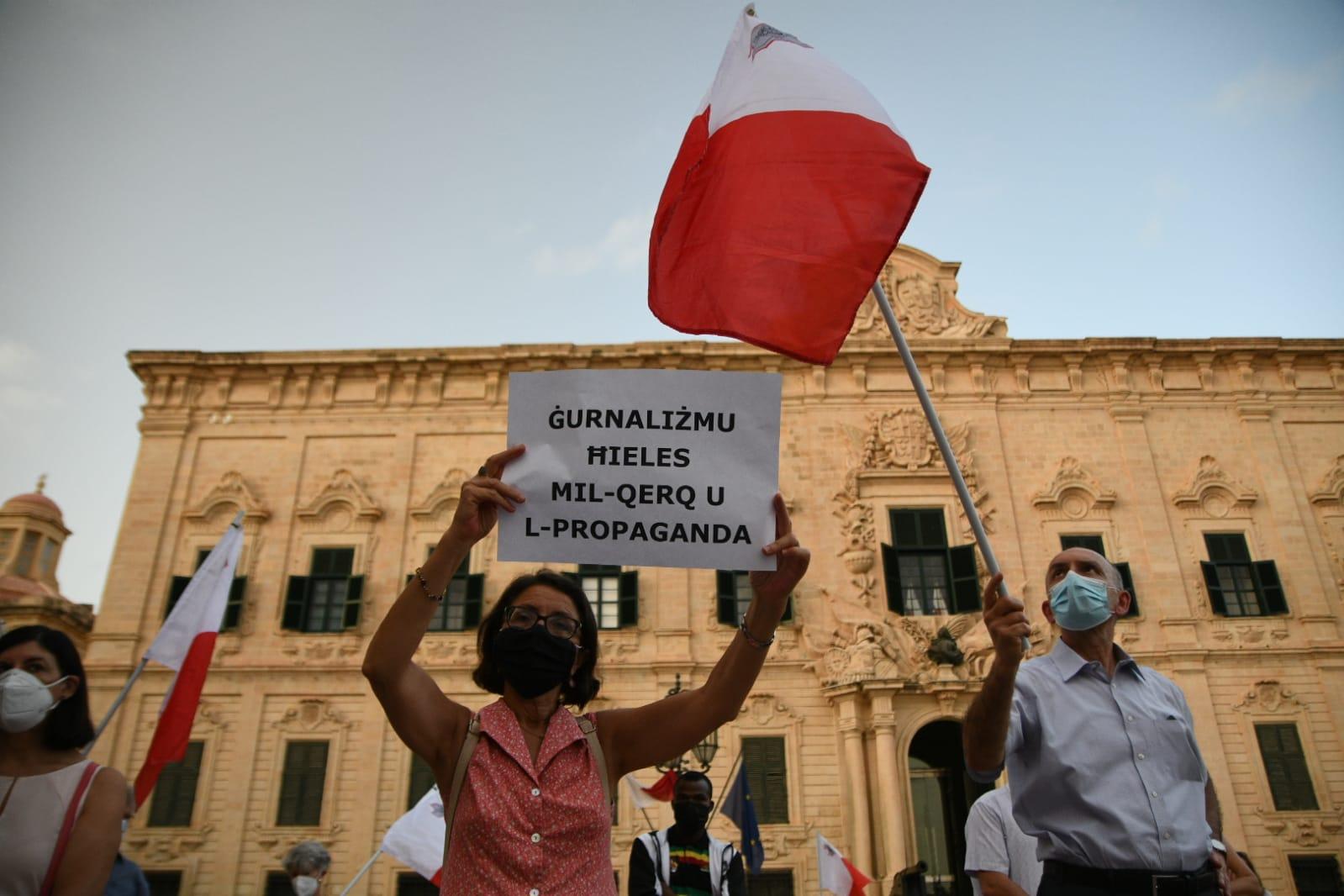 Scores of people met outside the Office of the Prime Minister protesting an escalating disinformation campaign. Photo: Jonathan Borg

The demonstration was organised by Repubblika, Occupy Justice and Delia.

In a statement ahead of the demonstration, they said that Prime Minister Robert Abela’s silence on the matter was “unacceptable”.

Repubblika's president Robert Aquilina and Delia have both been promised police protection.

Earlier this week Aquilina said he had been warned by a Labour politician concerned for his safety to “be careful”, while in an opinion piece Delia also expressed concern for his safety.

He said he will soon be unable to afford the time, cost or energy it takes to calm his family’s frayed nerves about whether this electronic violence could turn physical at some point.