In his customary sky-blue tie, Joseph Muscat marched past a group of jeering protesters and into the wood-panelled courtroom with the sort of confident defiance that had once been the trademark of his political persona.

It was billed as the main event: Muscat, brought to testify before the public inquiry into the murder of journalist Daphne Caruana Galizia.

The former prime minister was the most high profile witness brought to answer questions by the panel of judges so far.  After all, it was he who appointed the inquiry in the first place and he who led the government that it scrutinised.

Friday’s five-hour session opened with a lengthy statement by Muscat that came with a warning: “The inquiry board might not like what I have to say”.

In 20 minutes of uninterrupted monologue, the witness set to work on the inquiry like a boxer at the punching bag.

What was meant to be an independent judicial process, he charged, had become “politicised” and at times an outright “failure”.  He came out swinging.

The inquiry was not following its own terms of reference, nor had it asked many of the pertinent questions. Instead, fishing expeditions and “curiosity campaigns” had been permitted to go ahead, he said.

The State, which the inquiry was meant to evaluate, was not merely his Labour administration of 2013 and 2017, but also previous governments, the opposition, and even the independent press, he argued.

Though his hands trembled as he leafed through the pages of his speech, his voice boomed like the Muscat of old.

His confident demeanour left many in the hall stunned. Caruana Galizia’s son Paul shook his head in disbelief. 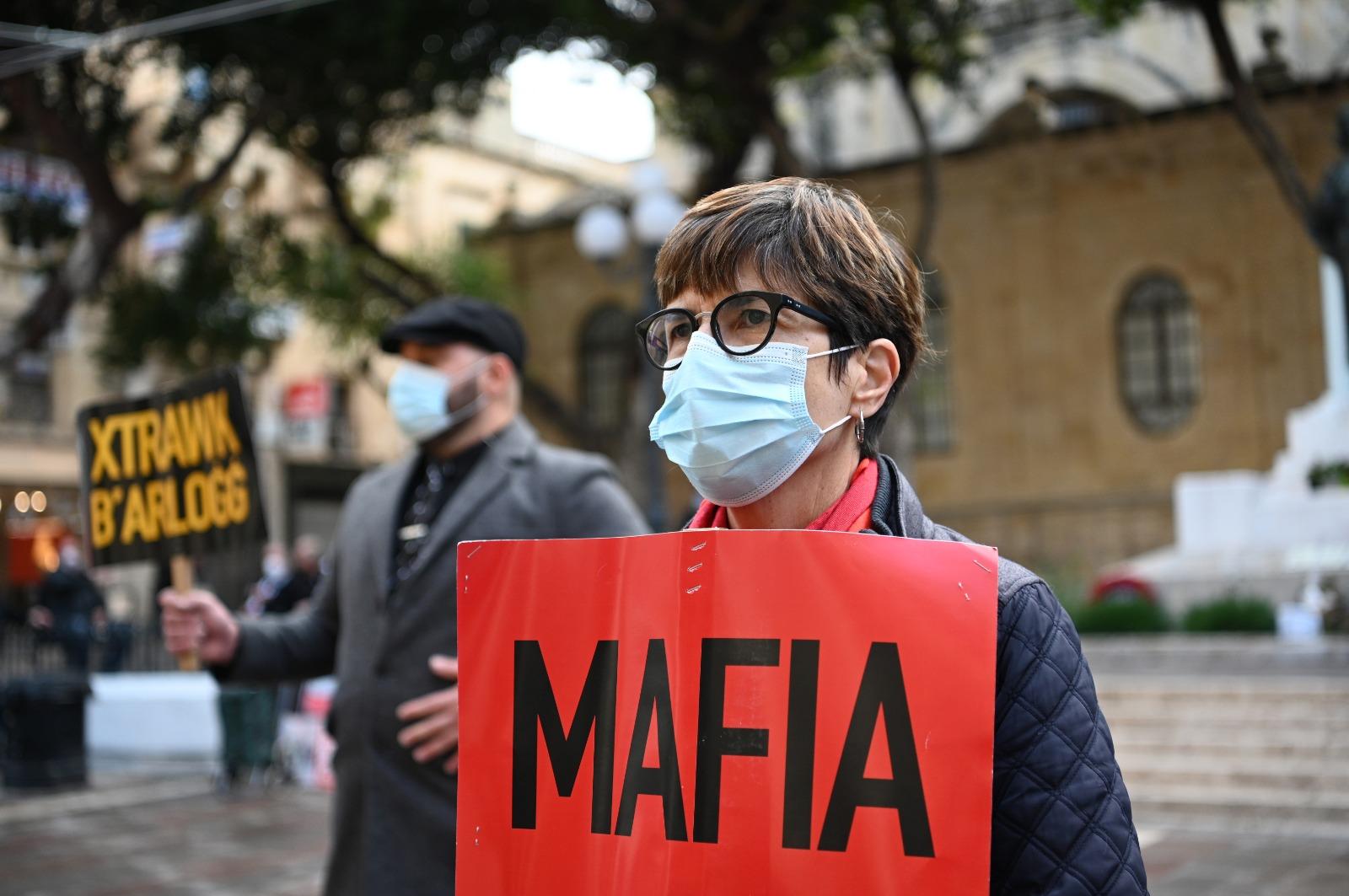 A small group of protesters gathered to jeer Muscat as he arrived at the inquiry. Photo: Mark Zammit Cordina

It could be said that Friday’s inquiry sitting did not only take place in the court room.

As Muscat’s opening speech dragged on, a member of his former staff uploaded regular snippets to Facebook, including a full copy of his statement in both Maltese and English - the former Labour leader always had a keen understanding of the power of social media.

Muscat’s replies to questions by judge Michael Mallia often went on for several minutes and at times even the witness himself forgot what the original question had been.

After five hours of testimony, he scurried down the street and back out of the limelight.

He weaved regrets into hyperbole, quipped jokes one minute and appeared on the edge of tears the next.  Muscat was, in his words, a victim, both of Caruana Galizia’s “lies” but also as a result of her murder. The bomb blast that ended her life, also ended his political career.

Questions were not only put to Muscat by the panel of judges but also by the lawyers representing the Caruana Galizia family. Muscat however brought his own legal team. Labour Party lawyer Paul Lia hounded parte civille lawyer Therese Comidini Cachia, who is also an Opposition MP.

Nearly every question she put to the witness was met with a “what is the relevance of this?” or “this is a political question” from Lia.

Then came Jason Azzopardi, who also represents the Caruana Galizia family. While the PN MP and firebrand landed a few punches on the former prime minister, his glove was often plucked out of the air by the inquiry board mid-flight.

Perhaps the most interesting part of Muscat’s testimony was said behind closed doors. He responded to questions about briefings on the murder investigation and his behaviour in the lead up to the arrest of alleged murder conspirator Yorgen Fenech in an empty court room.

But, just before the press, public, and even the Caruana Galizia family were ordered to leave, Muscat once again seized the microphone.

“I would just like to make another short statement before we end,” he said.

Muscat told the room how he had hired an intelligence firm to draft a report which he said disproved claims he was being investigated in the US. And also shot down rumours he planned to flee the country or relocate to Dubai.

“My family and I are happy here in Malta,” his statement ended.

Five hours had passed, and Muscat’s testimony was over.

But the inquiry is not. Muscat’s right-hand man, Keith Schembri, is yet to be brought to answer questions, as have others. The judges have yet to say whether they believe the state bears responsibility for Caruana Galizia’s murder.

“I have said all I had to say,” Muscat told reporters as he scurried down the street and back out of the limelight.