Most of the hate crime reports filed with the police over the past two years were of a racial and political nature, while a good number of complaints were made about hatred on grounds of language.

Statistical data, which only dates back to January 2019, shows that over two years, there were 29 reports filed over racism and another 26 over political intolerance. Another 22 were filed in 2020 alone over language discrimination.

According to data provided by the Home Affairs Ministry, between 2019 and 2020, 10 reports each were filed for hate crime based on the victim’s colour or sexual orientation.

Interestingly, in the first month of 2021, another four reports had already been filed over hate linked to people’s skin colour.

Other hate crime reports were linked to ethnic origin, gender and gender identity and religious beliefs.

In Malta, hate crime is covered by the Criminal Code, where punishment is increased by one to two degrees when the offence is aggravated or motivated by hatred on the grounds of gender, gender identity, sexual orientation, race, colour, language, national or ethnic origin, citizenship, religion, belief, political or other opinion. 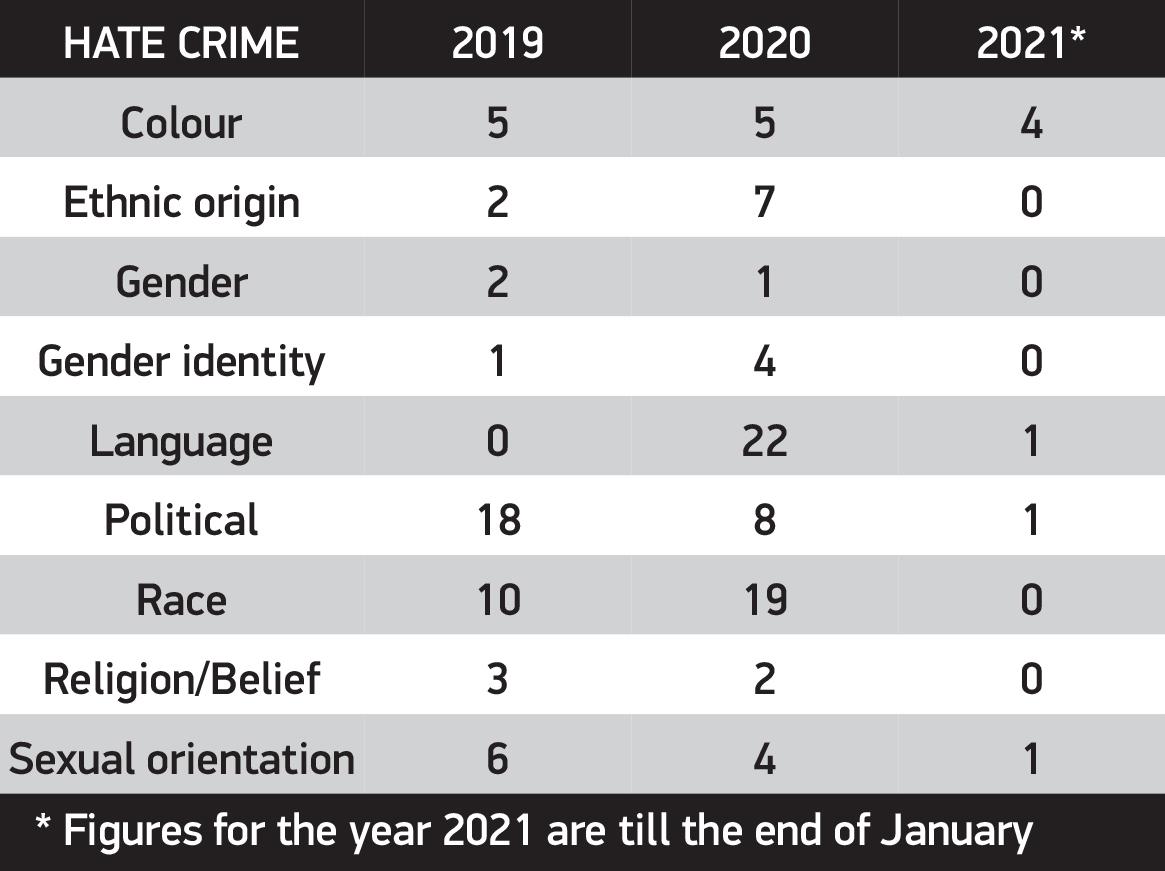 The data was provided to Times of Malta following the publication of a Council of Europe advisory committee opinion about Malta’s protection of minorities.

The report flags the lack of systematic collection of data on the prevalence of racially-motivated crimes and cases relating to incitement to racial hatred.

The committee called on the authorities to establish a publicly available data collection system on hate crime incidents, including hate speech, which would record the specific bias motivation and the way it had been addressed by the competent authorities.

A ministry spokesperson said that following amendments to the Criminal Code, the national police system was amended “to facilitate the capture and reporting of hate crime when such incidents are reported”.

The spokesperson added that court sentences handed down for such cases were publicly available.

In its report, the committee also noted that while the relevant Maltese authorities have insisted that there are no national minorities, they have pursued their efforts to reinforce integration policies.

It called on the government to include questions on ethnic affiliation in the forthcoming 2021 population census, in accordance with United Nations Economic Commission for Europe recommendations.

Reacting, the government said that the population census questions were specifically designed to reflect the national context and were guided by public consultations.

“The public consultation specifically highlighted race, sexual orientation, religion and language as important elements, and, unprecedentedly, these will all be included in the 2021 census.”