For the sixth consecutive year Malta’s LGBTIQ rights remained one of the most comprehensive for citizens in Europe, as the country topped ILGA’s European Rainbow Map Index.

Malta placed first in the classification with 94 points, up from 89 last year.

Prime Minister Robert Abela said on Monday that Malta was committed to keep improving the score in the coming years.

Malta ?? has remained the highest ranking country on @ILGAEurope's index ?️‍?. We have strengthened the score from previous years & are committed to keep improving in the years ahead - RA

The report was published on Monday, marking International Day Against Homophobia, Transphobia and Biphobia.

However it got 75 from 100 points for equality and non-discrimination over all, failing in health (sexual orientation), blood donation and goods and services issues.

"The Equality Act, which would further strengthen rights protections for LGBTI people, continued to be pending," it noted in the report, flagging two objections.

These were the Medical Council's suggestion to allow healthcare workers to refuse procedures or treatments and the support provided by 14 medical associations to a conscientious objection clause. 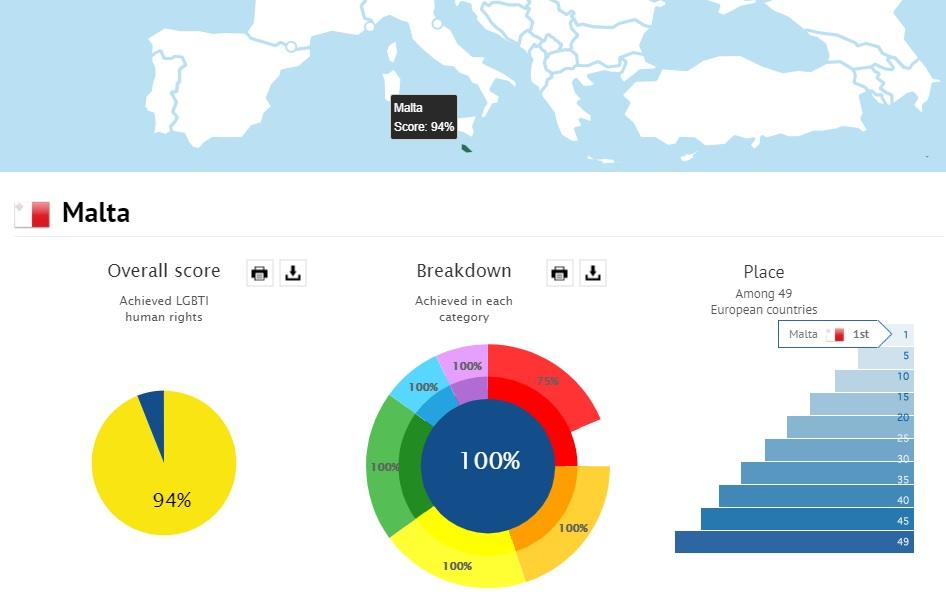 In its report, ILGA said that the national sexual health screening services and the gender well-being clinic were closed in the beginning of the COVID-19
pandemic. Both reopened mid-June, with a backlog of appointments.

"In June, LGBTI organisations found the replies from the Health Minister to HIV-related questions at a parliamentary session vague and insufficient. In July, the Health Minister affirmed that new HIV medications would be launched by the end of year.

Pharmacies were eventually restocked with HIV medication following emergency deliveries from Portugal and the UK.

In a statement the PN called for fresh policy to address the LGBTIQ community's health needs. It addes that PREP treatment should be given for free to all those who need it.

"The PN is aware of social, economic and emotional challenges that LGBTIQ people face. The specific needs of LGBTIQ people should be recognised and the country should provide unhindered access to services, especially those linked to health and autonomy."