Malta has refused to allow delivery of food and water supplies to a migrant rescue vessel stranded with 101 on board, the ship's operators have claimed

The MV Eleonore, operated by the German NGO Mission Lifeline, rescued the people, including 30 minors, from a rapidly-deflating rubber dinghy in the Libyan search and rescue zone on Sunday.

However, two requests for a safe port had been turned down by the Maltese authorities, who said the country did not have the "physical capacity" to take in more people.

Italy has turned down a similar request.

Lifeline CEO Axel Steier told Times of Malta that Transport Malta had on Tuesday denied the NGO permission to deliver food and water supplies to the stranded vessel.

"It seems Maltese authorities are happy to allow the Eleonore to go into distress and risk people dying from no food or water," Mr Steier said. 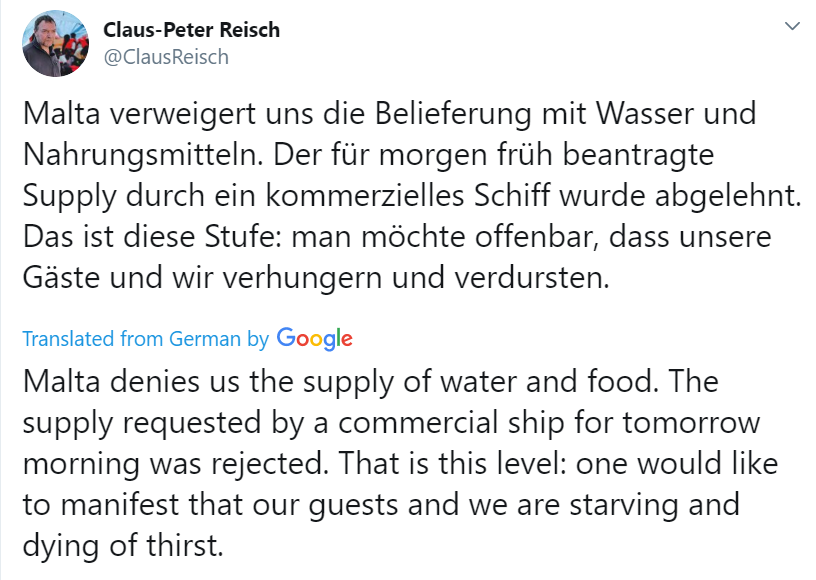 The Maltese Rescue Coordination centre (RCC) had already turned down a request to disembark, replying that the country had "no legal obligation" to provide a port, and did not have the "physical capacity nor the capability" to disembark the migrants on board, even temporarily.

"Thus, your decision to address Malta is not only putting undue pressure on one particular member state (ie Malta), but also depriving your migrants a dignified reception when they disembark," the RCC said.

Times of Malta has reached out to the government for comment.

Sources said Malta's Initial Reception Centre, where migrants arriving by boat are taken to be medically checked and processed, is under pressure.

Some 525 people have been rescued by Armed Forces Malta and taken to the centre since Friday.

Of those, 356 people were to be relocated to other countries as part of an EU deal.

Prime Minister Joseph Muscat on Tuesday tweeted a picture showing a group of migrants leaving Malta for Germany. The migrants had been rescued by the ship Alan Kurdi and brought to Malta as part of the EU deal. Another group left for France last week.

Thanks to #Germany for continuing to honour its pledges taking #migrants brought to #Malta as part of European ad hoc agreements -JM pic.twitter.com/tuc2vzSS9B

The Lifeline spokesman said on Tuesday assistance has also been requested from Italy, Germany, and EU migration commissioner Dimitris Avramopoulos.

“As a German-flagged vessel with a German crew, our overwhelming desire is for a solution to come from Germany,” the spokesman said.

“Solidarity cities have come forward demonstrating the willingness and capacity to accommodate people rescued from the Mediterranean.

“We simply need to remove the political obstructions that are preventing us from accessing these solutions.”

The NGO is hoping that the EU and member states can broker a diplomatic solution that would allow a swift disembarkation.

The Eleonore is captained by Claus-Peter Reisch, who earlier this year was fined by a Maltese court over improper vessel registration in relation to the rescue of 200 migrants on the MV Lifeline in 2018.

The migrants are all male and include 30 minors, 15 of them unaccompanied.

Lifeline said in a statement that those on board were “exhausted” and “in need of urgent disembarkation and access to asylum within the international frameworks of maritime, refugee and human rights law”.

The NGO said the vessel was not in a position to manage a prolonged stand-off, and asked Malta for “urgent diplomatic support to pressure for a fair solution based on EU solidarity and responsibility-sharing”.

“We are aware of [Malta’s] reception constraints, but our overwhelming priority lies with the wellbeing of the 101 vulnerable people onboard and we will consider every course of action necessary to protect them. We respectfully ask that you work with us to facilitate a swift, effective and humanitarian outcome,” Lifeline said.

The developing situation follows the nearly three-week odyssey endured this month by the Spanish rescue vessel Open Arms, stranded with 100 aboard for 19 days after Malta, Italy and Spain all refused entry.

Another vessel, the Ocean Viking spent almost two weeks stranded between Malta and Lampedusa until Malta agreed last Friday to allow the 356 rescued migrants to disembark as part of an EU-brokered deal that will see them relocated to six different EU countries.

Meanwhile, the Armed Forces of Malta in two operations on Monday rescued more than 160 migrants who were brought to the island after being found at sea in rubber dinghies in Malta's Search and Rescue area.