An undersea cable connecting the Maltese national grid to the European energy network is completely out of action and will take an indefinite amount of time to fix, Enemalta has said.

Malta's electricity provider revealed that the extent of the damage, probably caused by a ship's anchor, means it will have to pay €150,000 a day to power all other turbines to reduce interruptions until the problem is resolved.

A further €1 million will be spent on a survey to discover the extent of the damage to the interconnector between Malta and Sicily.

In a sign of the gravity of the situation, Enemalta would not commit to a timeframe for when it expects the damage to be fixed but has admitted it has a plan should it still be out of action by summer.

There have been several nationwide power cuts in the last five weeks and several widespread outages, including one on Monday, that left people feeling frustrated and concerned.

Enemalta chairman Kevin Chircop told a news conference on Monday evening that the company had taken a decision that would be costing it an estimated €150,000 a day to make sure the service is reliable.

Why has Malta experienced blackouts?

Mr Chircop and Enemalta chief executive Jason Vella said that the latest national blackout on December 23 had been caused by severe damage to the interconnector between Malta and Italy.

He said that the first blackout on November 26 had been caused by a fault in the interconnector. But on that occasion, when the load shifted onto two default plants, these tripped and shut down too to protect themselves from further damage.

Tests conducted so far showed that the damage is around 30 kilometres out of Ragusa’s shores and 150 metres under the surface of the sea.

A boat will be leaving Mallorca on Thursday to go to the site to survey the extent of the damage. A report is not expected to be completed until January 8.

This survey alone will cost around €1 million. The damage will have to be repaired by another boat with a separate team of experts and the costs depends on the extent of the damage, Mr Vella said. 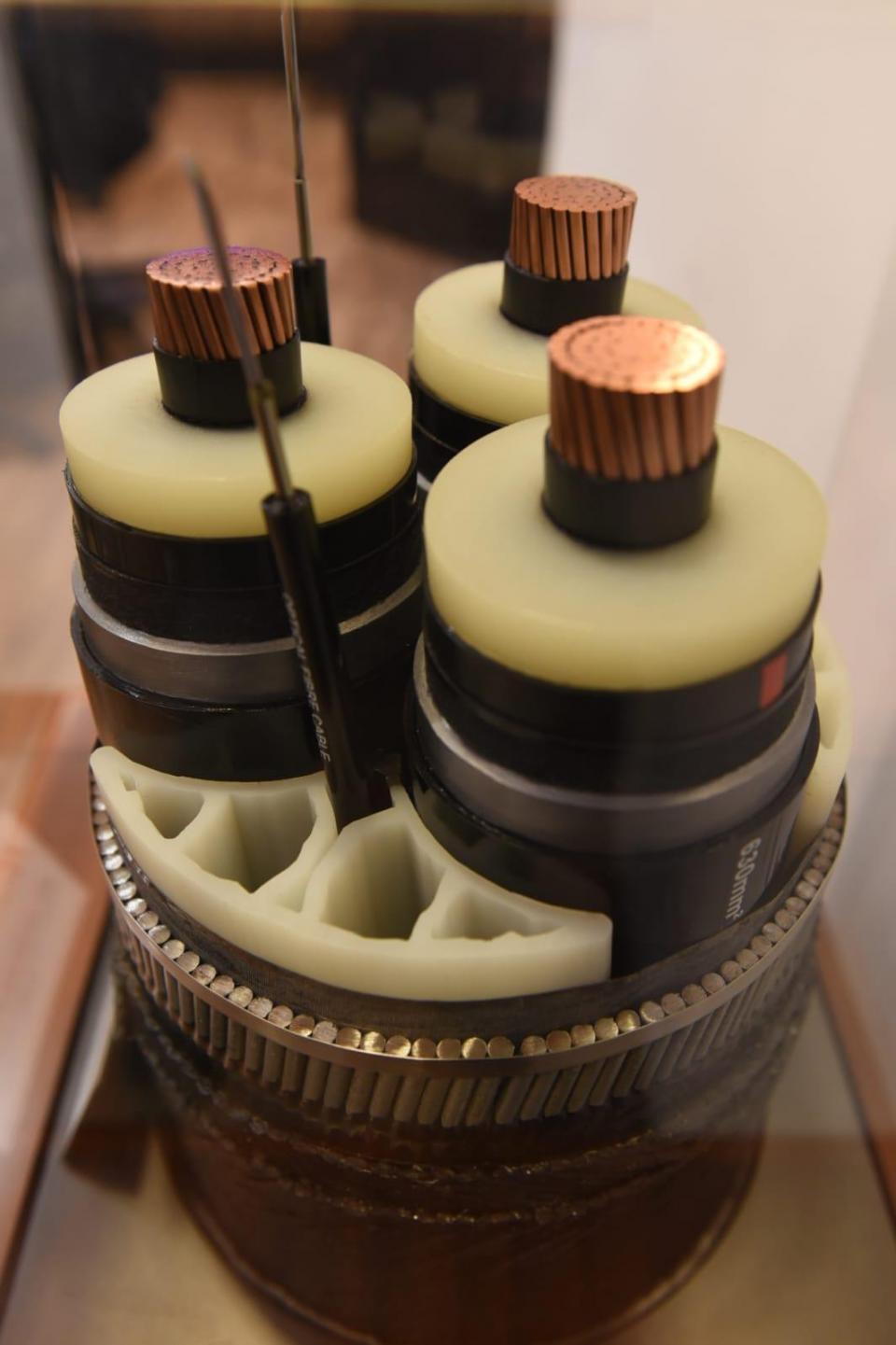 Two out of three cables running through the interconnector are severely damaged. Photo: Chris Sant Fournier

How does the interconnector help power Malta?

Mr Vella explained that Enemalta had a total generation capacity of 753MegaWatts, including the 220MW through the Malta-Italy Interconnector. The Electrogas plant, which also provides electricity, has a generation of 210MW and the BWSC plant, part converted to gas can generate 153MW. There are then emergency plants of 70MW, 85MW and 35MW.

He said that the first blackout on November 26 had been caused by a fault in the interconnector. But on that occasion, when the load shifted onto the Electrogas and BWSC plant, these tripped and the default plants shut down too to protect themselves from further damage.

“For the plants to work properly, there has to be a balance between demand and supply. If you lose one generation plant, other turbines will compensate for that but for that to happen, the turbine carries out automatic shedding whereby they shut down some of the demand to recreate the balance until more power generators kick in. This is what causes the short power outages,” he explained. 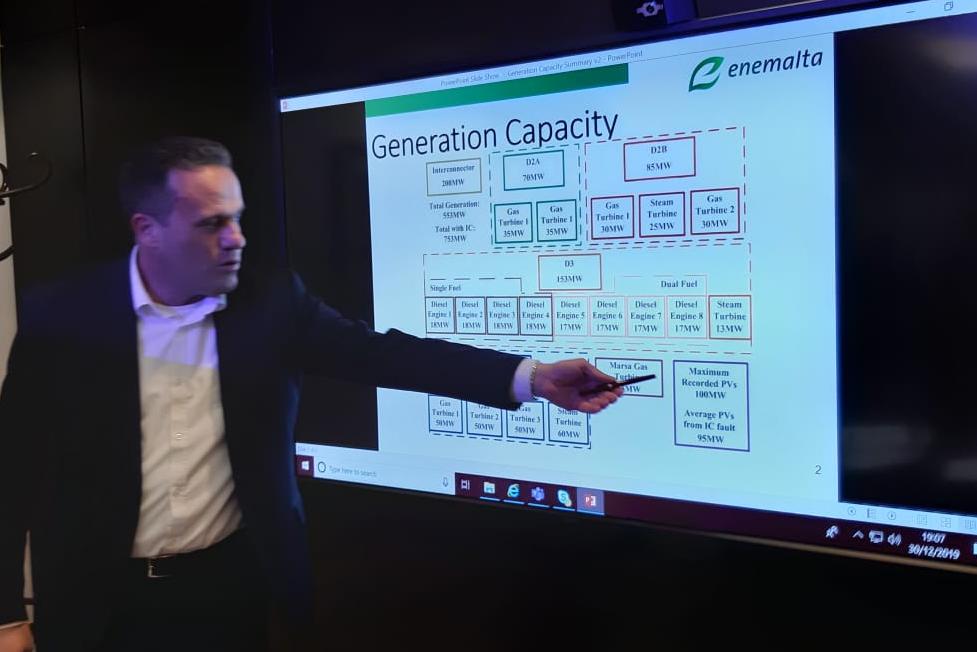 The Enemalta officials refused to admit that the interconnector gave the firm peace of mind from the security of supply aspect despite saying that it was reliable because of the several sources of power feeding into the energy grid.

Mr Vella said the power failures in recent days were caused by “isolated failures” in several of its other plants which caused turbines to shed the load to be able to start re sorting power to affected areas. Mr Vella said that trips occurred in the Electrogas plant and then in the two emergency plants purchased in 1995 and 2000.

What will happen now?

On the way ahead, Mr Vella said that given the ever-increasing demand for electricity, the government was currently working on a study to see what kind of technology was required to ensure security of supply. This could be in the form of another interconnector, another power plant or batteries. This report on energy generation between 2020 and 2035 is expected to be finalised by summer.

Asked about the demand, Mr Vella said the demand today was 390MW, more than 366MW of last December since it was not as cold last year. “The peak for summer was 522MW. If the interconnector is not up and running by summer, we believe we have enough capacity to cope with the demand,” he said.

In the short term, to reduce power outages as much as possible, Enemalta has decided to have more turbines on what is known as ‘slipping reserve’, which is when turbines are working but not producing electricity. It will shorten the disruption in supply, he said.

Mr Chircop said he was not in a position to say for how long the interconnector will be out of action.

When asked whether Enemalta can cope with the increase in demand once factories which are on shut down return to work in the New Year, Mr Chircop said there was enough capacity to cater for this demand. Asked whether it had enough gas and diesel in store for the added work these turbines were expected to carry out, Mr Vella said there was enough to last at least until the end of February.

Claims for compensation have already been made by the Malta Hotels and Restaurants Association. Asked about this, Mr Chircop said "Enemalta is doing all it can to minimise disruptions. We will consider every claim but we abide with the Energy Supply Regulations."