Messages of congratulations flooded in following Roberta Metsola's election to the presidency of the European Parliament, the youngest MEP and only the third woman to hold the top job.

“The European Parliament is the beating heart of our European democracy. Looking forward to cooperating with you, dear Roberta,” Michel tweeted.

Ursula von der Leyen praised Metsola and said her "hard work and determination are an inspiration to us all".

"We'll work closely together for the EU's recover and a green, digital and bright European future."

President George Vella hailed her election a “remarkable achievement” both for Metsola and for Malta.

“If united, our size & geography pose no obstacle to vision & commitment,” Vella wrote.

Opposition Leader Bernard Grech said he is both "thrilled and proud" by the news of her election in an emotional statement.

“Today you have ignited the hearts of thousands of Maltese and Gozitan children, and young people to continue believing in themselves. You have proven that when you strive for something, you can achieve it. Even coming from a small country, you raise your head, work and move forward. You gave new hope showing that when you fight hard you can be a winner,” Grech wrote.

David Agius, on behalf of the Nationalist Party, said she had honoured Malta and Gozo. He congratulated all Maltese MEPs for voting in the national interest.

Deputy Prime Minister Chris Fearne also congratulated Metsola, saying her task was not an easy one but he was convinced she would be an honour to Malta.

Their messages were reciprocated by the Speaker, who said he had already written to Metsola and congratulated her.

In a statement later, the Church in Malta congratulated Metsola on her appointment.

"Th bishops of Malta and Gozo hope that, through her work, the European project will continue to be built on fundamental values that respect dignity and human rights, freedom, democracy, equality and the rule of law of all Europeans, particularly the most vulnerable," the statement said.

“There will be moments in the life of our country when all the people will unit and for a while forget the sadness of the conflicts between us, and instead we turn to each other with a smile, recognising that Malta has children who can make us all proud,” Gonzi wrote.

He said that Metsola’s election  is one of those ‘rare but precious occasions.’

"There is no red or blue in this post. There is only integrity, seriousness, competence and values that those of good will embrace and want to see grow in everyone, especially in our younger generation.” 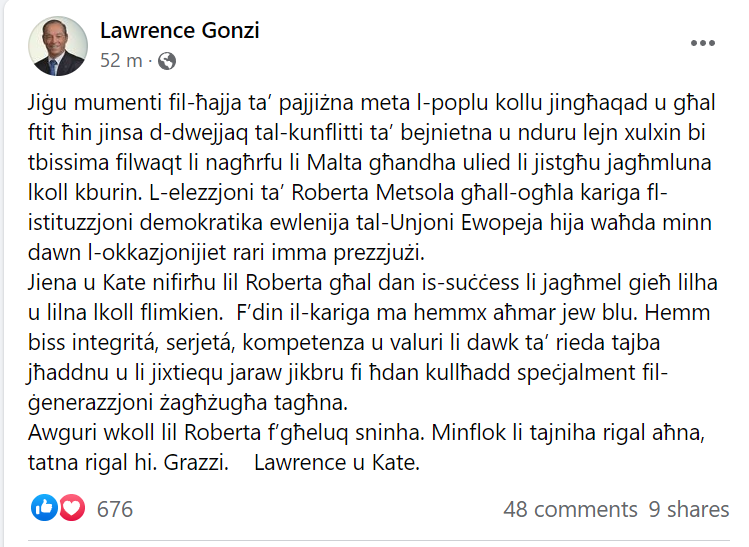 “She will open the next chapter for the European Parliament after the first half of the mandate was marked by pandemic disruptions."

“In the remaining two and a half years before the next election, we have crucial decisions ahead of us. We need Europe’s economy to create more jobs, to become more competitive, to become carbon-neutral and to set new rules for the digital world. Today’s election in the first round shows that the constructive majority of this institution wants to work together. It represents pro-European common sense in extremely challenging times.”

Jean-Claude Hollerich, President of the Commission of the Bishops Conferences of the European Union, congratulated Metsola. "She is a brilliant person who will certainly be able to fulfil this important institutional role in an excellent manner," he wrote.

One of the sons of slain journalist Daphne Caruana Galizia congratulated Metsola and compared her success with Joseph Muscat's "delusional" aspirations.

“Coming from the smallest member state in the European Union, this makes it much more important for Malta and other small states. It gives a factual message that great things can be done, even with the most limited of resources.”

“This election gives Malta an opportunity to celebrate tremendous positive news following the recent steak of bad news related to Malta which have tarnished Malta’s reputation.”

"The appointment of Roberta Metsola as President of the European Parliament is a clear example of how being a woman is not, and should not be, a barrier to progress," she wrote.

"Today should be another occasion to encourage more Maltese women to take the step forward to contribute to public life."

The Malta Employers Association said Metsola's appointment was a "positive step to improving Malta's branding as a country that can generate people of such calibre and integrity".

The Malta Chamber echoed that sentiment, saying that Metsola's appointment could "contribute to elevating Malta's profile at EU level and internationally."