Two ministers, as well as activists, have urged police to take action against Mosta priest Fr David Muscat for hate speech after a Facebook post he uploaded in the wake of the murder of a Polish woman in Sliema on Sunday morning.

The post focused on the alleged aggressor, Abner Aquilina and the possibility that he was gay or bisexual, saying it was worse than being sick. 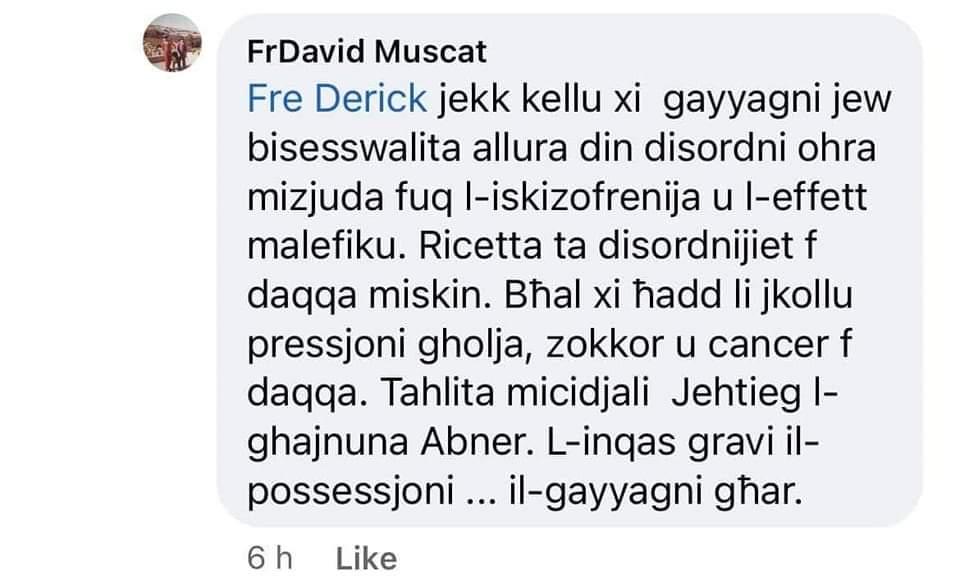 "A line has been crossed, and I ask the authorities to take the necessary decisions, because one cannot make remarks which incite hatred or negative sentiment against a section of society," Equality Minister Owen Bonnici told One TV's Piazza programme.

Inclusivity Minister Julia Farrugia Portelli in a Facebook post said she had asked the police to investigate and act against Fr Muscat for his obscene and homophomic remarks against persons who were LGBTIQ.  "I can never accept that anyone is insulted because of their sexuality," the minister wrote.

The Malta Gay Rights Movement (MGRM) said that alongside several other individuals and organisations, it had emailed the Police Commissioner attaching this and other instances of hate speech.

No stranger to controversy

Fr Muscat is no stranger to controversy. In November 2019, he raised another storm over anti-migrant rhetoric and was spoken to by Archbishop Charles Scicluna.

At the time he had likened the influx of foreigners coming to work in Malta to an “invasion” and had repeatedly stoked fears that foreigners would soon outnumber Maltese.

Without naming the cleric, then Prime Minister Joseph Muscat said at a political activity that he had spoken to the archbishop and expressed his disappointment that the Church was allowing a person from within its structures to legitimise racial hatred.

The Curia said it did not comment on meetings and discussions between the Archbishop and his priests but said the views of Archbishop Scicluna on the need to welcome and help migrants was clear and followed on the teachings of Pope Francis.

Earlier in summer 2019 Fr Muscat was seen on camera praising Nazi sympathiser Normal Lowell, who has been convicted of inciting racial hatred.

He said Mr Lowell has “sowed a seed that will bear fruit in the future”.

Back then, the Archbishop had said in a Tweet that the Church dissociated itself from Fr Muscat’s views.