Parliament on Monday began debating legal amendments to improve gender representation in the House of Representatives.

The amendments, to the Constitution and the General Elections Art, will see parliament enlarged by up to 12 seats to ensure a better gender balance. The Opposition has said it will back the Bill.

Malta's parliament is currently heavily skewed towards men, with just seven of parliament's 67 MPs being women. Across the EU, only Hungary has a lower proportion of women MPs.

The gender balancing proposals were first presented for public consultation in March 2019. 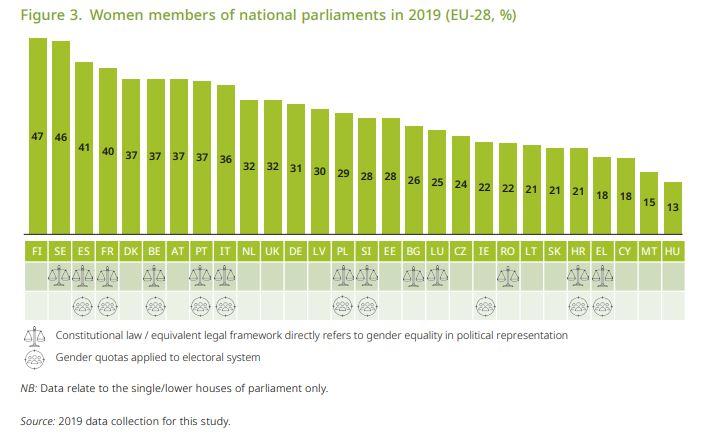 Malta ranks poorly in terms of gender representation in parliament: Screenshot: Gender equality in national parliaments across the EU and the European Parliament, EIGE

What is the proposal?

The bill, moved on second reading by Prime Minister Robert Abela, will see a gender rebalancing mechanism kick in after a general election if an under-represented gender obtains less than 40 per cent of seats in parliament, including members elected in casual elections.

In such cases, the number of MPs shall be increased by not more than 12 members of the under-represented gender.

Who will get the additional seats?

MPs elected in this way will be those who at the last count had the highest or next highest number of votes without being elected, irrespective of the district they contested.

When the number of candidates declared elected through this method is still not reached, candidates from the under-represented gender who were ranked on a national basis with the highest or next highest number of percentage quota after the final count will be declared elected.

When even that method fails to elect enough MPs from the under-represented gender, the seats will be filled by co-option.

Gender-neutral persons shall be counted with the under-represented gender.

The number of MPs of the under-represented gender elected through the addition of seats shall not exceed 40% of the total number of elected MPs.

Candidates elected by virtue of the increase in seats are to be apportioned equally between the majority and minority party.

The provisions will remain in force for 20 years.

In his introduction to the debate the prime minister said the new mechanism was such that it sought to bring about gender equality without in any way impinging on the choice which people had on who to elect to parliament.

This bill, he said, was a milestone for the country and reinforced its credentials as a democratic country.

“This is a government that believes in equality, that comes from a history of a Party that has served as a catalyst for the advancement of women, including for the right to universal suffrage and women being given the right to vote,” Abela said.

“Throughout the 73-year history of this house, the low representation of women has been consistent, we can discuss the reasons why endlessly but now is the time to make changes.”

“The concept for this mechanism, is simple,” he continued, “to create a snowball effect, to build momentum to push those people and women to become candidates for the next general election in greater number that in previous year.”

He added that he believed that the imbalance would have corrected itself before the ‘sunset clause’ of 20 years because people believe in and want to see increased female representation.

He hoped that this measure would lead to more women, as well as young people, opting to seek a political career.

The prime minister was followed by Nationalist MP Claudette Buttigieg who said the Opposition would back the Bill because it too had a history of seeking equality.

Buttigieg said the Opposition while agreeing with the Bill, would move some amendments. For example, the Opposition felt that following general elections, casual elections should be held quickly so that women would have a bigger chance of being in the Cabinet.

She also could not understand why the provisions of the bill would not apply if candidates from more than two parties were elected.  Why should the rights of woman, in this case, suffer because of this?

Buttigieg said that while, in an ideal society, corrective mechanisms such as this Bill would not be necessary, much work remained to be done locally to address negative stereotypes about women in leadership roles.

“The Prime Minister is celebrating a failure in pushing for this mechanism without accompanying with a greater force a drive to bring more women into politics and fight against negative stereotypes.”