A woman who stands accused of the fatal stabbing of her husband earlier this month told police that she often suffered abuse and suspected that he was cheating on her with other women.

Mayumi Santos Patacsil, 44, stands accused of having murdered her husband Marcelino Montalban Saraza at their Mellieħa apartment in the early hours of July 2.

She is pleading not guilty to wilful homicide, fabricating evidence and suppressing traces of a crime.

During the opening of the compilation of evidence on Wednesday afternoon,  a police sergeant from the Qawra district office spoke on how he was dispatched to assist a woman who called for an ambulance, claiming that she was bleeding.

“My husband hit me and he has done it before,” the woman said.

When police officers reached Mellieha, they spotted her standing in front of a supermarket.

She got into the police car and opted to head straight to the Domestic Violence Unit at Floriana Headquarters to file a report, before seeking medical treatment for her slight injuries.

The woman’s hands were scratched and blood-smeared and she claimed to be in pain, PS Joseph Attard recalled. 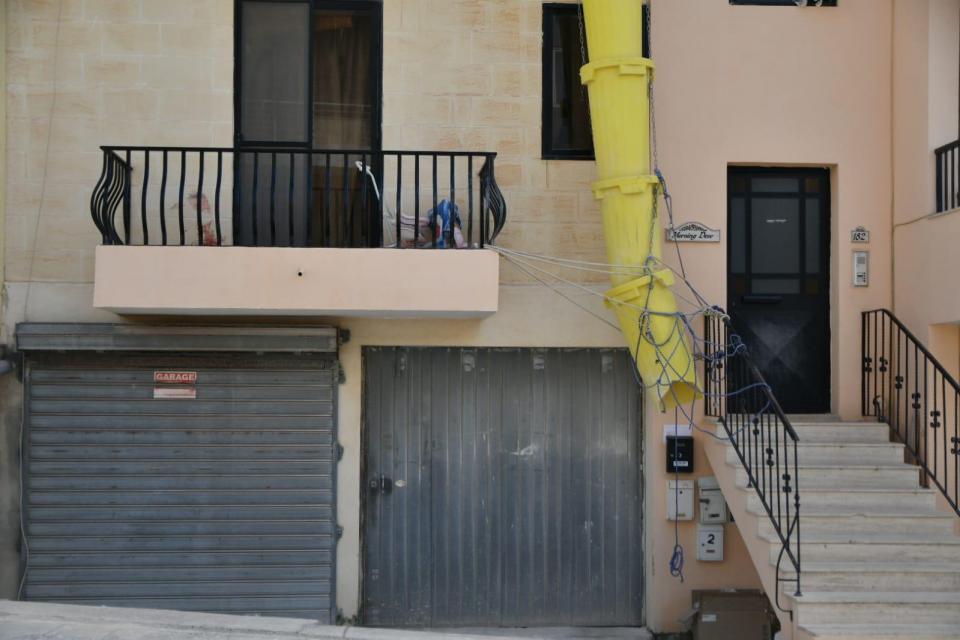 The apartment where the murder took place. Photo: Jonathan Borg

Patacsil told the officers at the Domestic Violence Unit that she had been living with her partner for the past four years, explaining that her children - not fathered by Marcelino Montalban Saraza - still lived in the Philippines.

She claimed that the couple used to argue frequently, especially when Montalban Saraza drank, but she never reported him to the police because she “forgave him.”

It was quite a while later, while filing her report, that the woman first told police that a knife had been used in the couple’s latest argument, explaining that she had reacted to the man’s beating by hitting him in his private parts.

She claimed he fell onto the knife.

It was around 2:30am when PS Attard, alerted by the Unit, went to the Mellieħa apartment.

The door was opened by a Serbian woman who explained that she lived there with her husband, a chef who worked at a St Julian’s restaurant, and their young child.

The Filipino couple had joined the family, sharing the rented two-bedroom flat.

As the sergeant checked out the rooms, there appeared to be no signs of disorder or traces of blood.

But the minute that the lights in the kitchen-living area were switched on, the officer spotted a figure lying motionless on the floor, completely covered by a wine-coloured sheet, one foot jutting out into the balcony.

Pulling away the sheet, the sergeant saw a man with a large wound on his stomach and another deep graze on the neck.

A pool of blood on the floor tiles had gathered beneath the stomach wound, that was later certified at the autopsy as the cause of death.

There was no pulse and the victim was pronounced dead on-site by the emergency team, said the sergeant, exhibiting a photo he took with his mobile phone when the crime scene was intact.

Inspector Godwin Scerri, said a  blood-smeared chef knife was found in the kitchen sink, a few metres away from the corpse, while another knife was on the ground outside, right beneath the balcony.

The chef knife, allegedly the murder weapon, had a one-and-a-half-inch wide blade and was roughly one foot long.

The other knife was equally long but had a narrower blade.

Investigators pieced together information gathered from various sources to complete the picture of events that night.

Marcelino was a ‘quiet’ man, who worked for a bus company, but his partner accused him of cheating on her.

That night, when the umpteenth fight broke out, the Serbian woman had taken her child and locked herself inside the bedroom.

But the shouting persisted.

Then suddenly she heard the man cry out in pain and soon after, the accused’s voice said, “sorry, sorry.”

The flatmate heard the accused enter the other bedroom and a while later she left the flat, pulling wheeled luggage along.

Around 12:30am, Patacsil turned up at the home of another Filipino couple in a state of shock, begging permission to stay over for the night and saying that she had stabbed her partner in the stomach.

She claimed not to know whether he was still alive.

But the other couple, used to the couple's regular arguments and her numerous messages to check on his whereabouts, directed her to seek help elsewhere.

Her friends watched from their balcony as the accused headed towards a nearby supermarket, where a police car with flashing lights soon drove up.

Next morning, they heard about the murder on the news.

Police also exhibited a report filed by a woman in December 2020 over messages she had received from Patacsil who claimed that she was having an affair with Marcelino.

Magistrate Caroline Farrugia Frendo, declared that there was sufficient prima facie evidence for the accused to stand trial.

The case continues in August.