The latest COVID-19 patient attended a weekend-long party at a St Julian’s hotel, just days before testing positive on Wednesday.

Health authorities are "strongly recommending" all those who attended the 'Hotel Takeover' event at the Radisson Blu hotel on July 17-19 to get tested.

Testing for coronavirus is already under way among guests and hotel staff, amid concern among healthcare professionals that it could lead to a spike in Malta's very low numbers.

Some of those at the event billed as “the ultimate 5 star weekend experience” have been instructed to go into quarantine as a precaution as they await the outcome of their tests.

The patient was the only new case of COVID-19 registered on Thursday. The person had symptoms, but it is not known when they emerged. 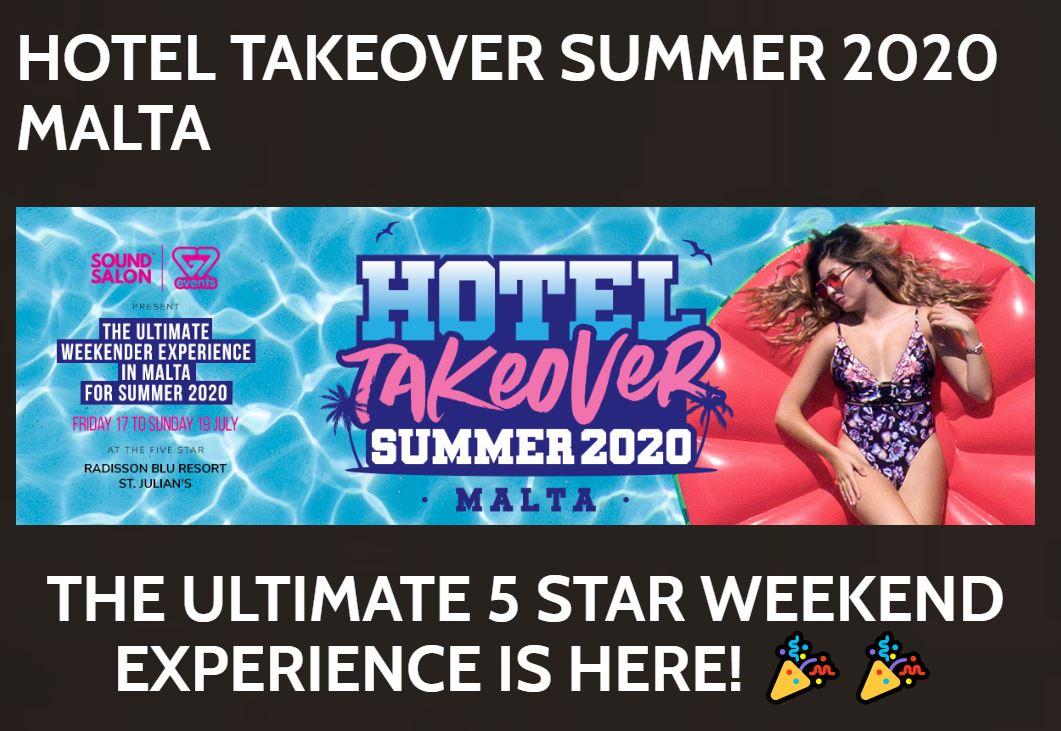 A flyer for the event

It is understood some of those closest to the patient have already tested negative, while authorities await other results.

In a statement, the health ministry confirmed the person had attended the event from July 18 and 19 and "strongly recommended that all those who attended this party get tested for COVID-19".

The ministry advised people to call 111 to set an appointment, even if they have not experienced symptoms. Those who do show symptoms are asked to quarantine.

"While there is no room for alarm as all the necessary measures are being taken as is being done in this case, it is important that everyone follows Public Health advice," the statement said.

Health authorities are expected to issue a statement encouraging all guests at the event, organised by G7 events, to get swabbed.

The Radisson Hotel in St Julian’s confirmed that all staff are being tested following instructions from health authorities and the hotel is being cleaned.

A spokesman said that all precautions had been taken including checking guests for fever. He also said that the party took place almost a week ago and the person “could have been elsewhere”.

In a statement, organisers G7 Events, said they were in contact with the health authorities and are “assisting them with any of their requests.”

“The health authorities will be contacting any persons they deem necessary whilst also issuing any public statements as they see necessary.”

Despite the authorities insisting on social distancing, parties and other events involving large crowds have resumed normally in recent weeks.

Hundreds of partygoers can often be seen huddled together in clubs while some feast enthusiasts could be seen celebrating in the streets over the weekend.

In comments to Times of Malta on Wednesday, Gauci said that those attending such events should be aware of the risks, especially if they forget to adhere to coronavirus containment guidelines after drinking alcohol.

Most coronavirus-related restrictions were officially removed in July, when Malta’s state of emergency was lifted. Masks remain mandatory on public transport and in shops – but there are no fines being issued if people ignore the guidelines.