Marsascala residents turned up in droves to oppose plans to build a massive yacht marina in the bay on Saturday morning, as Moviment Graffiti warned of more protests unless Transport Malta retracted its call for proposals.

Holding placards saying ‘No Tycoons, No Pontoons, ‘Marina? U’Ħallina!’ and ‘Il-Bajja Tagħna Lkoll’ a tense and charged crowd turned up on the Marsascala promenade in Triq il-Qaliet on Saturday morning.

Protesters were there to voice their opposition to a proposal by Transport Malta to turn the bay into a massive yacht marina that would sweep away popular swimming zones and recreational areas, even as large banners have appeared in recent days on residential buildings across the seafront bearing the words ‘No Marina’.

Addressing a press conference, Graffiti activist Andre Callus said that unless Transport Malta retracts its call for proposals and ensures residents that no plans to construct a marina in the bay will ever be enacted, a protest will be held at the same spot on Friday, August 27, at 6pm.

Additionally, he said that Infrastructure and Transport Minister Ian Borg must apologise to residents and constituents for allowing the authority to spearhead the “monstrous” project.

Mention of the minister's name triggered jeers and boos from attendees.

“This is not a ‘not in my backyard’ issue. This will not only affect the quality of life and recreation of residents as well as the thousands of people who come here to find some peace of mind,” Callus said.

“I am going to say this outright, this is not acceptable and we are going to fight back.” 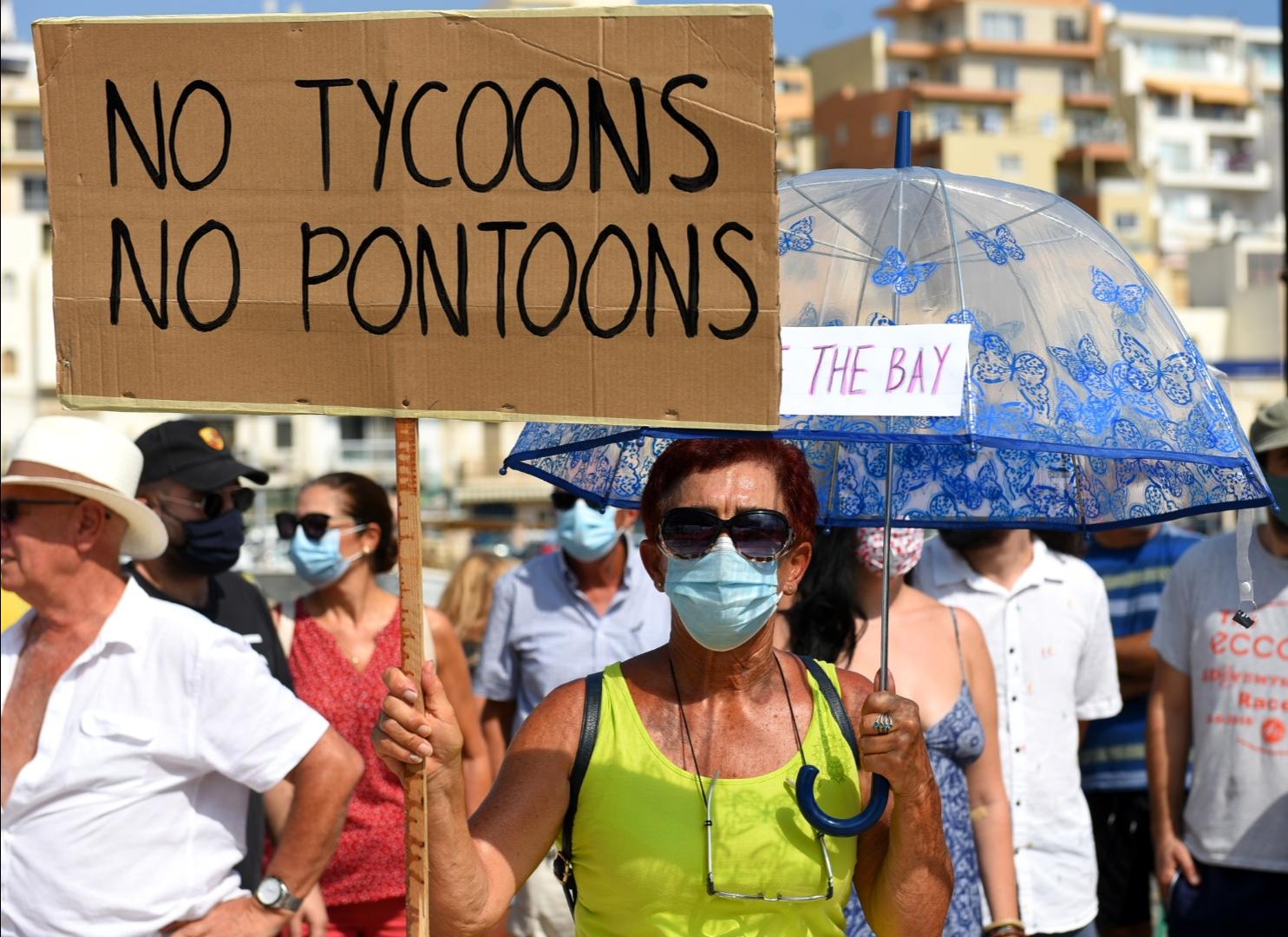 John Baptist Camilleri, who serves as minority leader on the local council, highlighted a number of issues in the issued pre-qualification document that are of great concern.

Chief among them is that the “so-called” artistic impression included calculations for massive tracts of land reclamation and dredging, with the authority's minimum requirements from bidders being for 700 berths to flood the bay.

Camilleri noted that after three years, the private operator selected to run the marina would have the facility to drive up berthing fees, which would likely cost local boat owners thousands of euros a year to maintain.

“Who do they think they are taking for a ride? Not once in this document are residents mentioned and how the impact of all of this commercial activity will affect our quality of life,” he said.

“All over Malta, where we have built yacht marinas, swimming and activities like fishing have had to stop. These proposals do not have the wellbeing of the community at heart. We are here today to remind them that there is power in numbers and that Marsacala is not for sale to the highest bidder," Camilleri said.

'This is not a partisan issue'

Marsascala resident Jeremy Camilleri addressed the protest, saying that authorities giving away large tracts of public spaces to the highest bidder was not a partisan issue.

“Everyone knows that I lean left and have always supported Labour and while John Baptist is from the Nationalist Party, what he is saying and his stance in the council meeting truly represented me and the best interest of this community,” he said.

“We must be at liberty to criticise the government when it acts incorrectly no matter who is in government and we are presented here today as a united voice because we are disgusted with secret proposals that ultimately will ruin Marsascala.”

“Ultimately, someone will make a tidy profit from this venture and it won’t be us. As a socialist I cannot accept that the people’s bay is just traded off.”

“We must look to each other and feel courage that we are above party politics and this is the only way we will resolve this matter. Now is the time for our authorities, our elected officials to take heed. It is not enough to let us gather and let us speak, you have to listen to us as well.”

Members of the Marsascala feast committee and fireworks display organisers for the feast of St Anne said that a yacht marina would impact long-held traditions in the village, as they would not receive clearance from insurers to let off fireworks in the bay as per tradition. Social and fundraising activities will also be impacted if the seaside promenade, used by many voluntary organisations, is eradicated in the process.

Paul Brincat, from the society of boaters and fisherman, as well as residents Theresa Hoban, Marianne Theuma and John Paul Cauchi also took a stand against the project.

ADPD: Now they want to destroy the sea

In a statement on Saturday, the green party ADPD said that the Marsascala marina proposal was another in a long line of destruction in the country and that authorities had ignored their obligations to consult with residents and the local council.

It said that the government was using local plans drafted in 2006 under the Nationalist Party to “run roughshod” over people.

“Like its predecessors the Labour Government avoids proper consultation, and is in favour of the destruction of our beaches and our coast. They destroyed the land and are now intent on destroying our sea.”