An Opposition MP has described as “shameful” the fact that, to date, the public registry makes no use of Maltese fonts depriving parents of giving traditional Maltese names to their children.

Ryan Callus raised the matter in parliament on Tuesday during his adjournment speech, inspired by a Facebook post he had come across a few hours earlier.

The post, by a certain Jacqueline Edward Schembri, conveyed the frustration and anger of a young couple who named their son Ġorġ, only to be notified by the public registry that this was not possible. The refusal was based on the grounds that the registry did not use Maltese orthography. Schembri took MPs and the Kunsill tal-Ilsien Malti to task for failing to raise the matter. 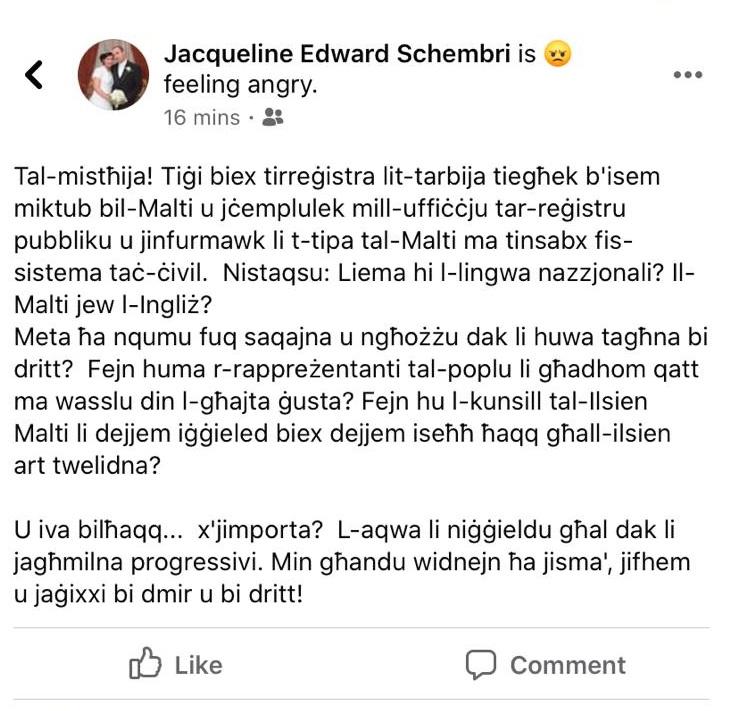 Callus said he felt bound to flag the issue which he described as appalling.

“Fifty-six years after independence, and 16 years after Maltese was declared as one of the EU’s official languages, I am ashamed to say that Maltese parents cannot give their children Maltese names. In this case they have to settle for Gorg instead of Ġorġ,” he said.

While calling on the government to rectify the situation, he noted that, in 2015, the registry had announced that by 2017 this matter would be addressed. Yet, three years down the line the problem persisted.

Callus also urged the government to find a solution which would make it possible for parents who encountered this problem in the past to change their children’s name using Maltese fonts without the need to go to court.

MP insists he will not give in to threats

In his adjournment speech, Callus also referred to the attack which former V18 artistic director Mario Azzopardi had launched on PN MEP Roberta Metsola. While denouncing such abuse, the PN MP said he had also been targeted by an anonymous letter which had been handed to him earlier during the sitting.

“Apart from being threatened I was also insulted, just for addressing a news conference in which I outlined five reasons why power generation is costing taxpayers an extra €91 million per year,” he said.

Callus remarked he would neither be intimidated by such threats nor fall in the trap of retaliating by stooping to such level. He added that as a representative from the sixth district he would keep saying what he believed was right.