The exclusion of revenues from passport sales was partly responsible for a €70 million deficit registered in the government consolidated fund for 2018, Times of Malta has learnt. 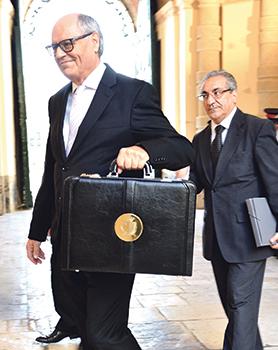 This comes despite multiple assurances by Finance Minister Edward Scicluna that the government would still register a surplus without the controversial cash-for-passports scheme, which sees EU passports sold to rich foreigners.

The International Monetary Fund this year warned that Malta’s high reliance on the IIP scheme and corporate tax meant government finances were vulnerable to external shocks.

A total of €163.5 million in revenue was generated for the government from the IIP scheme in 2016.

The Opposition was last month quick to pounce on news of the deficit, saying taxpayers were being forced to foot the bill for government corruption.

In reply to questions by Times of Malta, the Fiscal Advisory Council played down concerns about the consolidated fund deficit.

The council noted that projections of a surplus were conditional on information available at the time of their preparation, and hence deviations were possible.

A deficit is not of major concern to the council

It said the consolidated fund was only a starting point for the compilation of the general government fiscal balance, in relation to which fiscal rules in Malta and the European Union applied.

The council highlighted two main differences, which were relevant to help differen-tiate between these statistics better.

Consolidated fund transactions were recorded on a cash basis, and thus did not capture revenue which was due but had not yet been collected, and it also did not capture the bulk of revenues from the IIP scheme, which were to be considered as normal government revenues, in line with EU regulations, the council said.

“In view of these caveats, the fact that the consolidated fund recorded a deficit is not of major concern to the council, as this does not exclude the possibility of the general government fiscal balance recording a surplus,” the council said.

The council will be issuing an assessment on the actual and planned general government fiscal balance for 2018 later on this year.

Finance Minister Edward Scicluna said in a statement last month that the deficit was a result of “record” expenditure on capital projects in 2018.

“This strong investment in capital projects is testament to government’s vision to build the Malta of tomorrow by strengthening the country’s infrastructure,” the Finance Minister said.

Public debt has been on a downward trend in Malta since the Labour government returned to power in 2013.