Infrastructure Malta has instructed contractors to restart roadworks on Wednesday after cabinet agreed to a price capping measure for waste dumping.

The agreement will see quarry owners taxed at a reduced rate of five per cent, provided they accept construction waste at €12 per tonne.

The majority of quarry owners are MDA members. 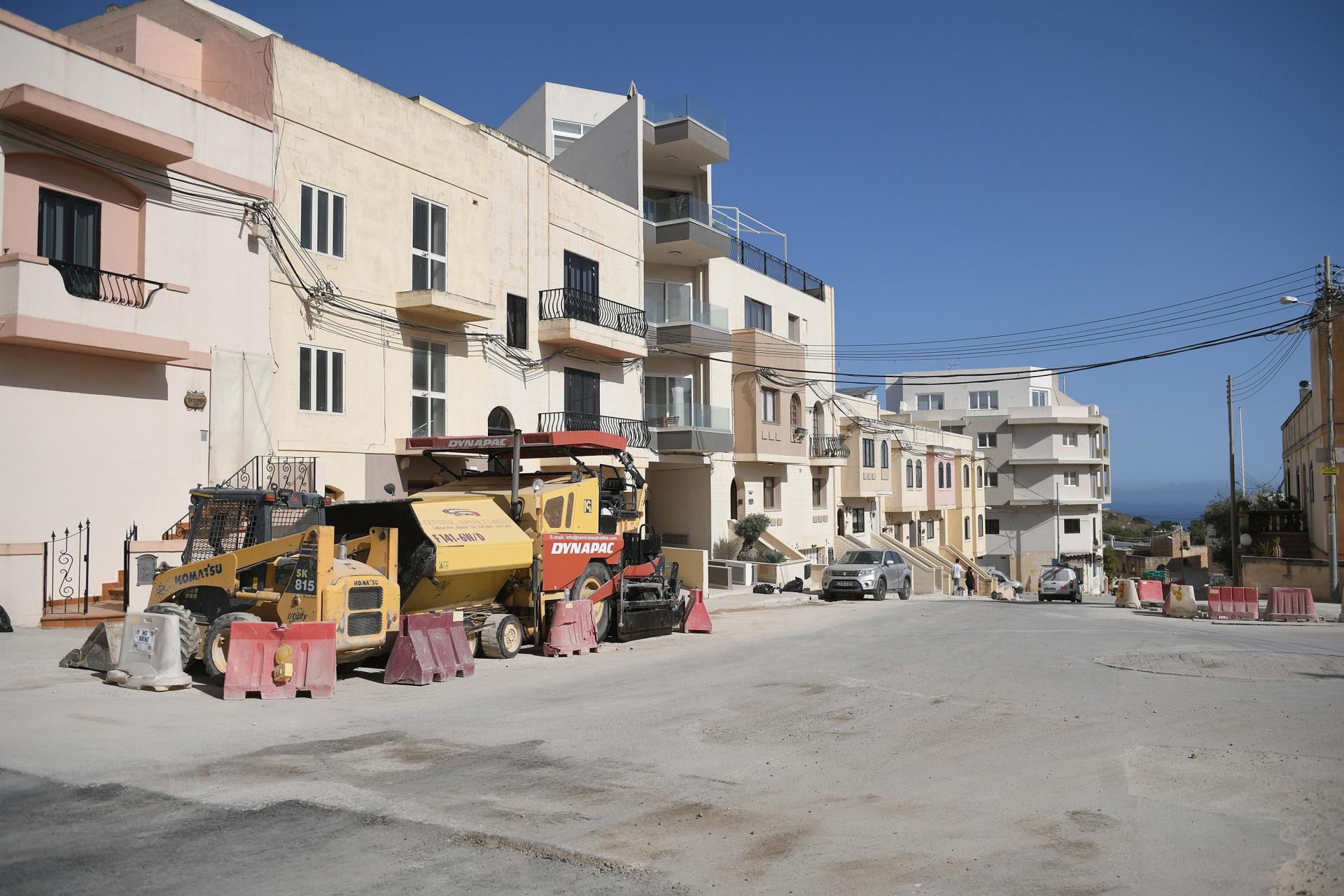 All Infrastructure Malta projects, like these works at Għargħur, came to a standstill on Monday. Photo: Matthew Mirabelli

Last week roads agency Infrastructure Malta had ordered that all roadworks halt from this week, claiming there was "no space" to dump construction waste.

But that claim was immediately rebutted by the regulator, the Environment and Resources Authority. Farrugia also subsequently said that local quarries had spare capacity for "years to come".

Sources said that disagreement actually stemmed from the price of dumping waste, which had risen from €8 to €15 per tonne.

In a notice sent to contractors on Tuesday afternoon, and seen by Times of Malta, Infrastructure Malta announced that it was terminating its halt order and allowing roadworks to continue.

Infrastructure Malta's notice said that following discussions with stakeholders, the authorities had acknowledged the challenges in the management of construction and demolition waste that needed to be generated to implement the agency’s infrastructure projects. 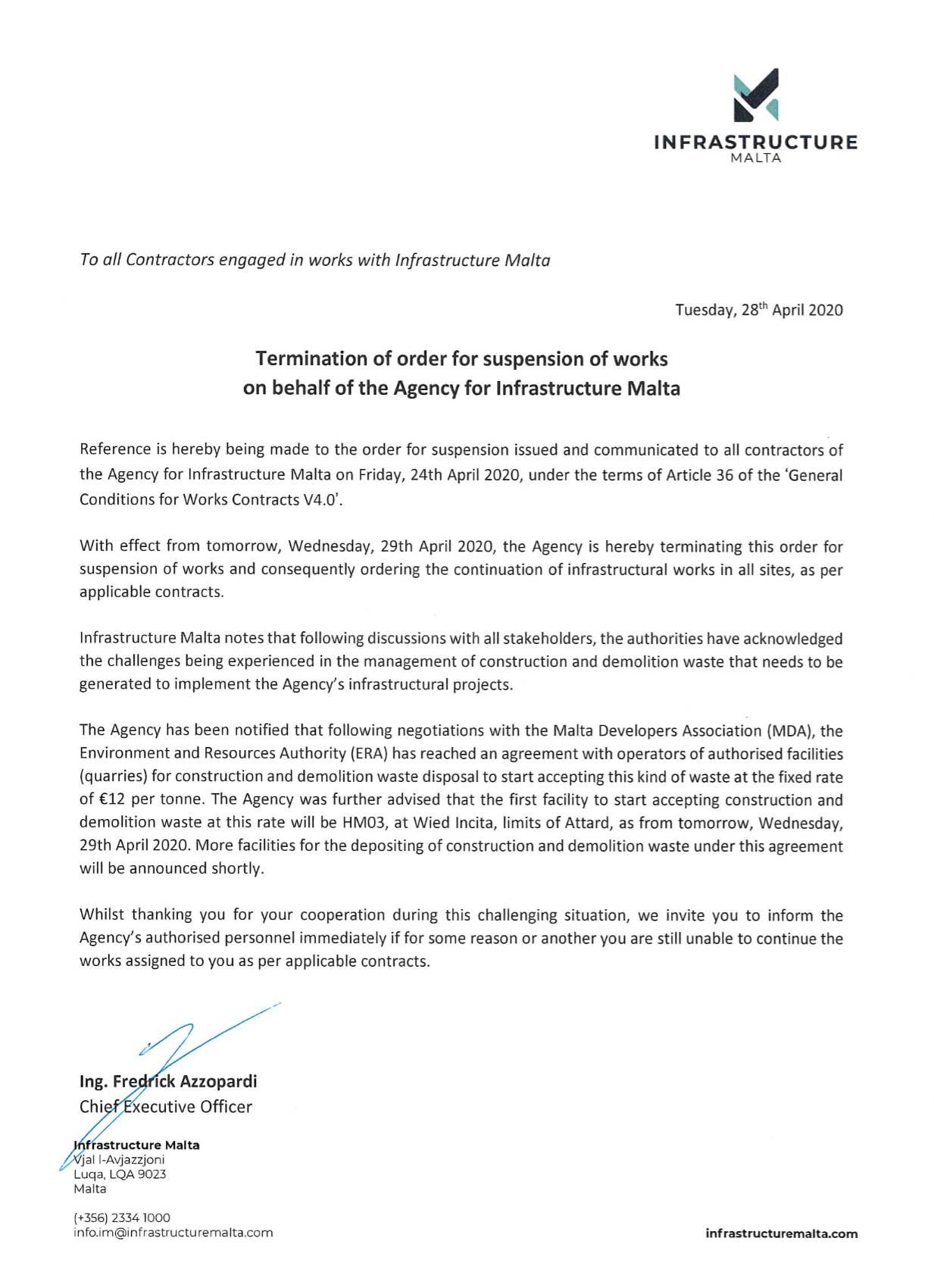 The notice sent to contractors on Tuesday.

“The agency has been notified that following negotiation with the Malta Developers Association, the Environment and Resources Authority has reached an agreement with operators of authorised facilities (quarries) for construction and demolition waste disposal to start accepting this kind of waste at the fixed rate of €12 per tonne,” the notice reads.

It goes on to say that the first facility to start accepting construction waste at this rate as located in Wied Incite, limits of Attard. This quarry will start accepting waste as from Wednesday April 29, the agency said.

More facilities for the depositing of construction and demolition waste under the agreement are expected to be announced.

Construction waste sector to be regulated

The deal struck by ERA, the environment ministry and MDA is part of a broader plan to regulate the construction waste sector.

Apart from encouraging stone to be used more than once to cut down on waste, developers will also be required to list, in their commencement notice, the site where they will be disposing of rubble.

"Conditions in contracts for use of quarries, and in permits for operation and use, will be scrutinised and enforced by the responsible entities in a coordinated effort. This should provide for a sustainable future for the industry," the ministry said.

It described quarries as the "preferred option for depositing inert waste".

Answering a question by an Opposition MP in parliament on Monday, before a deal with the MDA was reached, the environment minister had noted that the option of dumping construction waste in the sea remained on the table.

“This happened in the past, permits had been issued and I am not excluding that this could be happening again," Farrugia said in reply to a parliamentary question.