Malta Air and Air Malta could both “live happily ever after”, the Prime Minister said on Tuesday, as the Ryanair subsidiary airline was launched with a set target of five million passengers within five years.

Joseph Muscat said he did not believe Malta Air would negatively impact Air Malta during the deal  signed between Ryanair and the Maltese government.

Ryanair CEO Michael O'Leary announced during the ceremony that the new airline hopes to carry five million passengers within five years and is already seeking new routes to add to the 62 it will take over from Ryanair.

The new airline will initially operate six formerly Ryanair aircraft and increase them to at least 10 within three years.

Aside from doubling its current Ryan Air fleet of six planes on the island, the company is also planning to relocate around 50 other aircraft from the Italian and German register to the Maltese one.

Details about Malta Air, were first revealed last Sunday and confirmed by Tourism Minister Konrad Mizzi, who said the development is the fruit of nine months of talks.

The airline will also be setting up hangar facilities for repair and maintenance operations in Malta.

Dr Mizzi this was a deal which would initially create some 350 jobs, but this was really about securing the future of tourism in Malta for the long term by putting Malta at the centre of a global hub.

Ryanair would also be transferring its 200 Malta-based crew to local contracts, paying taxes on the island.

Ryanair CEO Michael O’Leary said this was a proud day for the Ryanair group.

“By investing in Malta Air and putting these aircraft on the Malta register we commit ourselves to a very substantial investment in Malta,” he said. 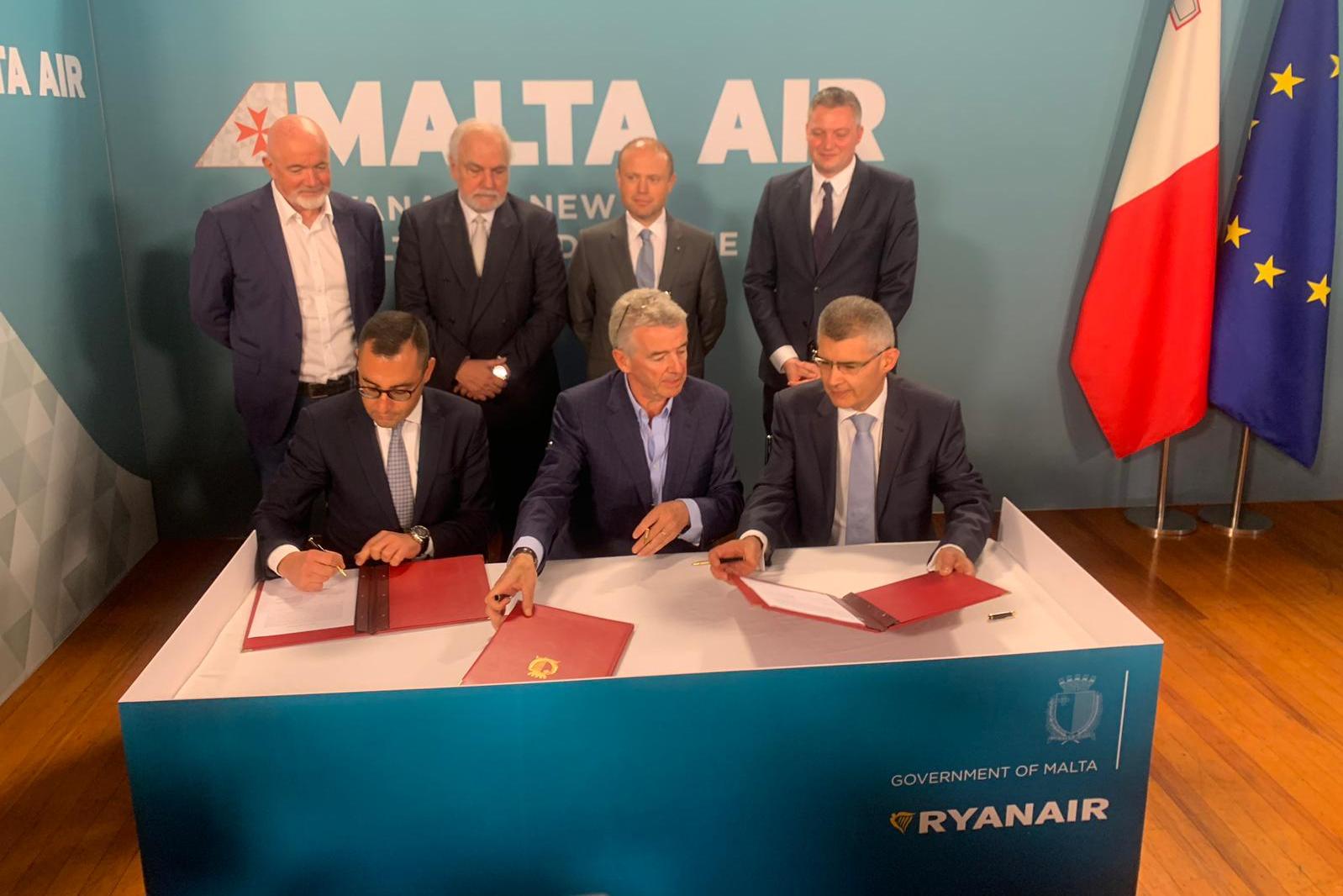 Ryanair has been operating in Malta for 12 years and currently flies three million passengers a year.

Asked about the fact that the government wanted to transform Malta into a regional hub in the Mediterranean, Mr O’Leary said he too saw the potential for the island to diversify its model from a purely destination airport to a connecting transitory one.

Malta Air, he said, was already exploring the possibility of connecting with North African destinations.

Mr O’Leary said this had been one of the company’s toughest negotiations in its 30 years of operations.

Meanwhile, the Civil Aviation authorities confirmed that the first Ryan Air plane had moved onto the local register on Monday night.

Both Dr Mizzi and later Prime Minister Joseph Muscat insisted that the new company will not impact Air Malta since the two airlines will offer different but complementary services.

The government will have a golden share in the new airline, enabling it to veto decisions on the sale of the airline or the transfer of the name.

No financial details have been disclosed.

Fielding questions from reporters, Mr O’Leary said Ryan Air had been flying out of Malta for more than a decade and had not been in competition with Air Malta.

“In fact Air Malta has grown since Ryan Air has been operating here, and the two enjoy a complementary relationship,” he said.

Malta Air will fly its new livery out of and into Malta by summer 2020.