Malta’s social welfare agency chief is facing calls to resign after posting a series of inflammatory comments on Facebook suggesting authorities should impound NGO rescue ships and scuttle them.

Alfred Grixti, who heads the Foundation for Social Welfare Services, suggested that authorities should seize ships used by international NGOs to rescue people stranded at sea “and sink them”.

“The NGOs are operating illegally in Maltese waters,” he wrote.

When asked by another Facebook user why authorities did not do as he suggested, Grixti - a Labour Party insider whose Facebook profile is dotted with photos of PL leaders - replied "... give them time".

Grixti told Times of Malta when contacted that he had made his position very clear on his Facebook page and would not comment any further.

In that comment - which Grixti did not set to be viewable by the public - he said that Eurobarometer surveys indicated that the vast majority of locals "do not trust the media".

Malta on Thursday declared its ports unsafe and said it would no longer accept any migrants rescued at sea, saying all the nation’s resources were focused on fighting the coronavirus pandemic. The government also said it could not guarantee the resources to come to the aid of vessels in need of help.

The announcement, which runs contrary to the country’s international maritime law obligations, prompted outrage and shock from several NGOs, which accused the government of using the pandemic to “shelve its human rights obligations”. 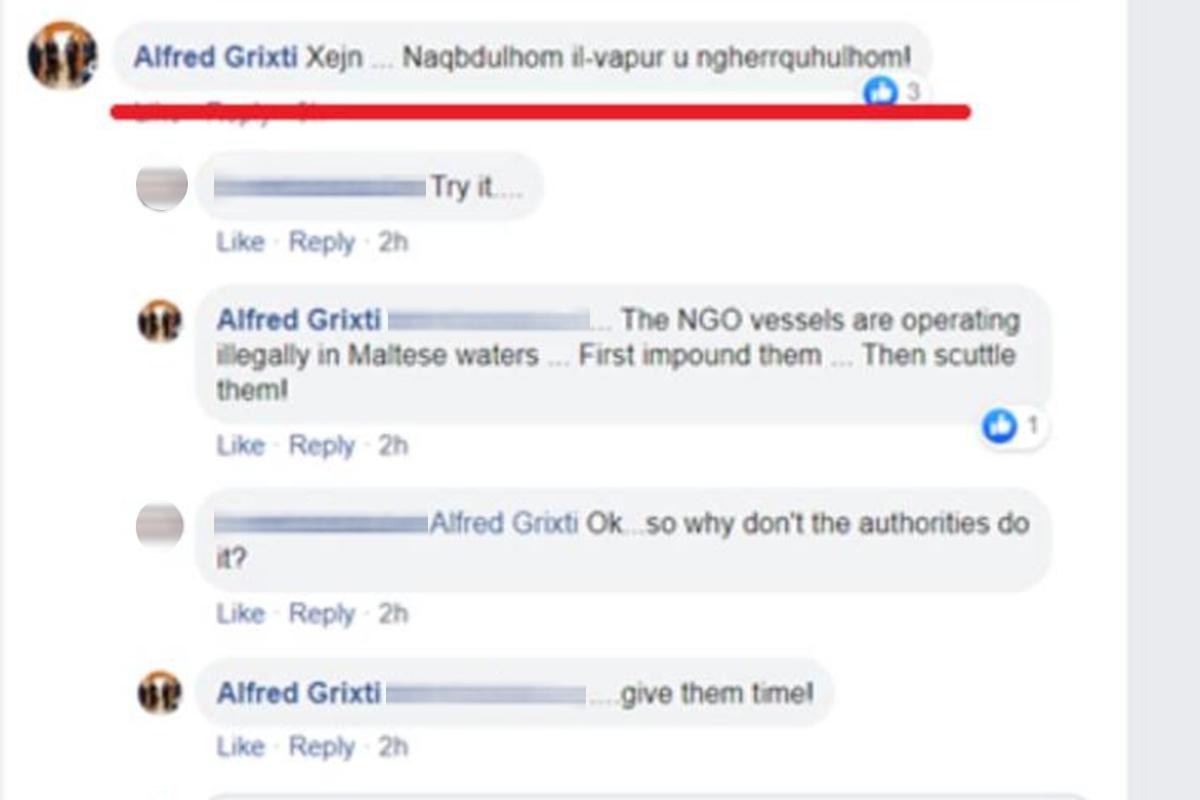 Some of the inflammatory comments posted by Grixti.

Malta's decision came one day after Italy’s government had made a similar declaration, effectively shutting its ports to all NGO rescue boats.

Grixti’s inflammatory Facebook comments, which were posted beneath a comment by another user who said a Germany NGO was “directing” migrants to Malta, stand in stark contrast to his official role.

As CEO of the FSWS, Grixti is responsible for the State’s various social services, which include Aġenzija Sedqa and Aġenzija Appoġġ. On its website, the Foundation’s declared vision is to serve as “a catalyst for change and development... consistent with the real and emerging needs of children, families and the community in order to avoid social exclusion”.

Maria Pisani, who leads the Integra Foundation, called for Grixti to be sacked, saying he was using his position to "incite violence and vomit crap".

She noted that Grixti's comments came on the same week that the government had marked one year since the racially-motivated murder of Lassana Cisse, who was gunned down in Birżebbuġa while walking home at night.

The Maltese Association of Social Workers said it is unacceptable that the CEO of the Foundation for Social Welfare Services, the state agency which is charged with providing its services to the most vulnerable, to make such statements.

"The association urges the authorities to ensure that the foundation, which is a lifeline for so many vulnerable individuals and within which so many social
workers are an invaluable presence for service users, is allowed to carry on with its mission by having, at its helm, persons whose views are consistent with its vision. Unfortunately, Mr Alfred Grixti has indicated clearly that his are not."

The Dean of the Faculty for Social Wellbeing, Andrew Azzopardi said Malta is in need of moral leadership that seeks the common good and not a dialectic of detestation especially from our community leaders.

Civil society NGO Repubblika said it had written to the head of the Hate Crime and Speech Unit, and the president of the social services foundation asking for the comments to be investigated and for action to be taken.

"Understanding barriers to care of minority groups and the underprivileged is central to any Social Welfare organization," the association said.

"Mr Grixti showed a complete lack of understanding, knowledge and maturity in his Facebook post regarding migrant rescue operations. His words were irresponsible at best, insensitive and serve only to continue to disintegrate the social fabric so essential at this difficult time."

The Association for Child and Adolescent Mental Health said Grixti's views were not compatible with the position he held. It said the foundation needed "to be led by someone who safeguards the basic human rights and will work toward the vision to avoid social exclusion".

“This is pure, unadulterated hatred,” Aquilina wrote on Facebook.

His MP colleague Jason Azzopardi went one step further and said Grixti had to resign.

“No two ways about it. Robert Abela: you cannot keep on running with the hares and hunting with the hounds,” Azzopardi wrote.