Infrastructure Malta has started laying the surface of the tunnels and traffic is expected to flow through in a matter of days.

Rather than being bored, the 90-metre tunnels were dug from the surface and then roofed. They link Addolorata Hill with Tal-Barrani Road and will ease the flow of traffic from the new Marsa junction towards the southern part of the island.

While the tunnels start being used, Infrastructure Malta will rebuild the overlying old roundabout to facilitate access to Santa Luċija, Paola and Tarxien.

A nearby jogging track is being rebuilt, with the project also involving the upgrading of the Tal-Barrani Road pedestrian subway to make it accessible to cyclists and to persons with disability, as well as a new 1km shared pedestrian and cycling path connecting Santa Luċija to Marsa.

The project has not been without controversy, with a large number of trees in Sta Luċija removed to make way for a section of road.

The 20m project is due for completion by the end of the year. 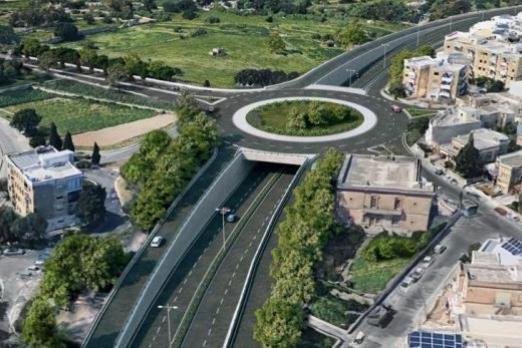 An impression of how the project is expected to look on completion.