Food prices have gone up at their fastest rate in at least four years, according to official government statistics.

The Retail Price Index shows an increase of 5.24% in food prices the 12 months to December, reflecting consumer complaints of rising living costs.

It is the highest annual increase since at least 2017 as prior to that data was presented differently.

Finance Minister Clyde Caruana promised to tackle the impact of rising prices on struggling low-income earners during a news conference on Monday.

The rising food prices pushed the overall annual rate of inflation last December stood to 2.59% up from 2.38% the month before. This is above the ideal guidelines set by the European Central Bank. 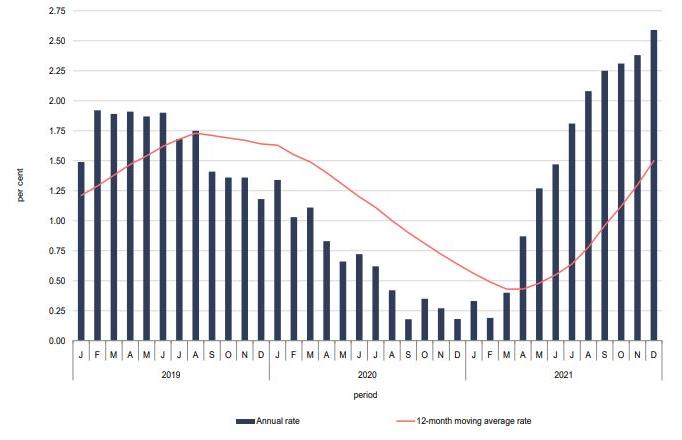 The rate of inflation has been pushed up by rising food prices. Photo: NSO

"The largest upward impact on annual inflation was registered in the Food Index, largely due to higher prices of vegetables," the NSO said.

Food represents a fifth of the basket of goods that make up the index, the largest single portion.

The NSO said that food and restaurant prices contributed to the largest upward impact on annual inflation in December, followed by transport and communication and other goods and services.

COVID-19, Brexit, and drastically increased transport and freighting costs have been blamed by importers as being behind a perfect storm of price increases on the island in recent months.

Shoppers first started complaining about rising prices in summer, with supermarket owners agreeing that prices have shot up.

At the time, importers and sellers had been reluctant to quantify the price hikes, but Times of Malta reported that a conservative estimate would be 15% on the average bag of groceries.

On the other hand, it appears Malta’s strategy of long-term fixed fuel purchase agreements is leading to stable prices in the energy sector with no change in utility prices.

Meanwhile, speaking to reporters on Monday, Finance Minister Clyde Caruana said that later this week he would be briefing social partners on a proposed strategy to tackle the impact of inflation on low-income earners.

The minister has in the past hinted at the need for a new system, aside from the Cost of Living Adjustment, that would specifically target lower-income earners who are more susceptible to price fluctuations.

He said a team of advisors from the finance ministry had been working on the proposal for several months.

In the past, Caruana has conceded that reaching an agreement between the government, employers and trade unions on a revision to the COLA system would be difficult.