People again took to the streets on Sunday in the first civil society national protest of 2020 calling for an end to corruption and seeking justice for slain journalist Daphne Caruana Galizia.

Civil society groups Repubblika and Occupy Justice and Manuel Delia.com hosted a march from the parliament building to Great Siege Square in Valletta.

Many of those taking part carried Maltese flags and placards hitting out at Joseph Muscat and his ministers and saying 'You have betrayed your own people'. They are chanting 'mafia' and 'gustizzja' 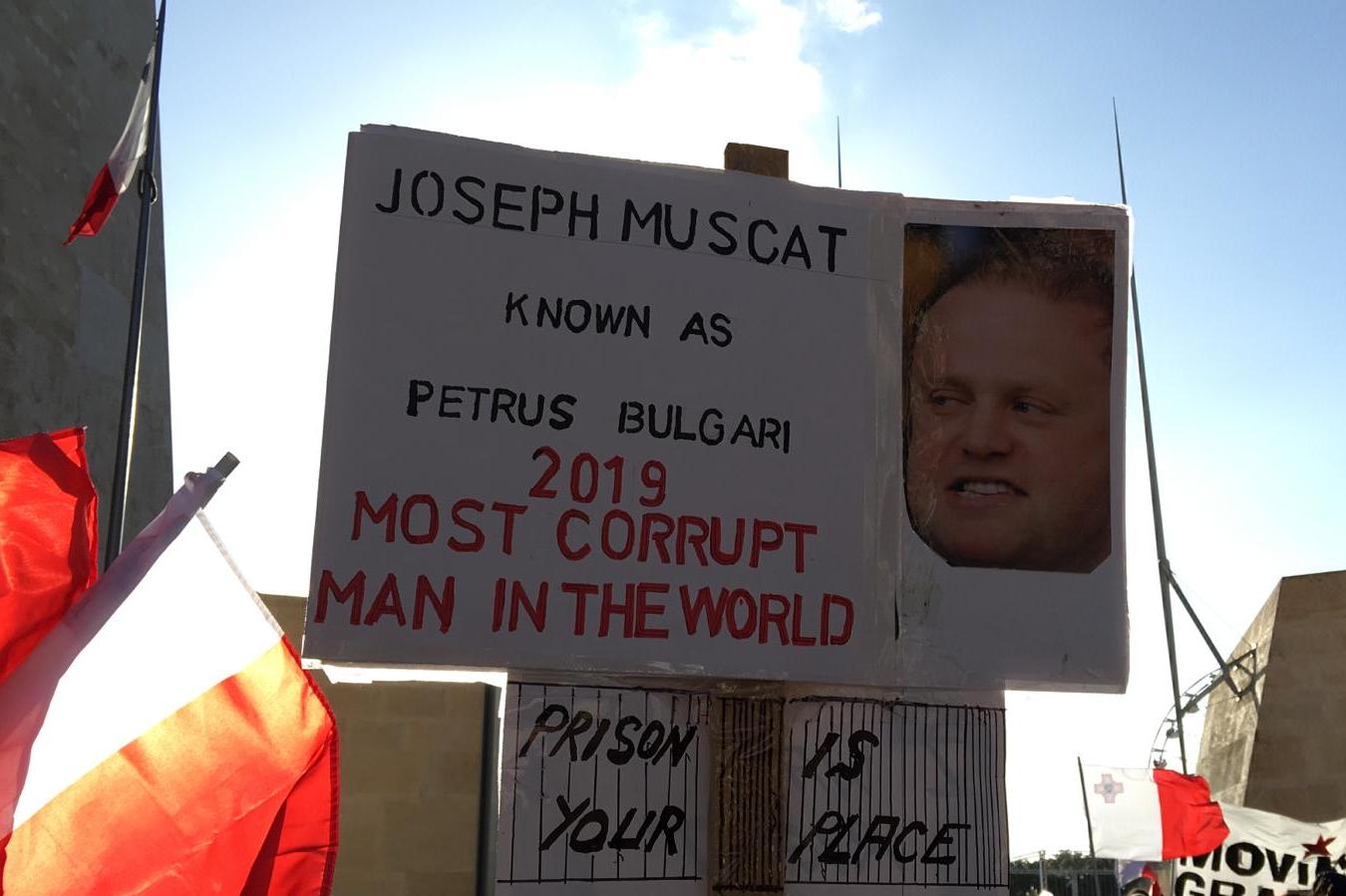 The NGOs have so far held 17 protests, including the three national protests, since major revelations in the Daphne Caruana Galizia in November.

Sunday's protest was followed by a concert against corruption featuring Brikkuni, Beangrowers, il-Lapes and Ċikku l-Poplu and others. Among those who also took part was X Factor judge Alexandra Alden, whose participation was mocked last week by Valletta Cultural Agency Jason Micallef.

"I am here to represent the freedom of expression of artistes" she said before starting her performance.

In the first of three speeches at the end of the protest, Prof Vicki Ann Cremona, who heads Repubblika, said she had a number of New Year wishes she hoped to see fulfilled as soon as possible.

She hoped Joseph Muscat and his corrupt gang would leave their posts, parliament and all other public roles as soon as possible.

She hoped that their corruption would be investigated and it would be recognised as such by people of all political beliefs.

She also hoped that everyone responsible for wrongdoing would be held to account and face impartial justice, and that the Maltese would no longer revere their political leaders as some infallible gods. 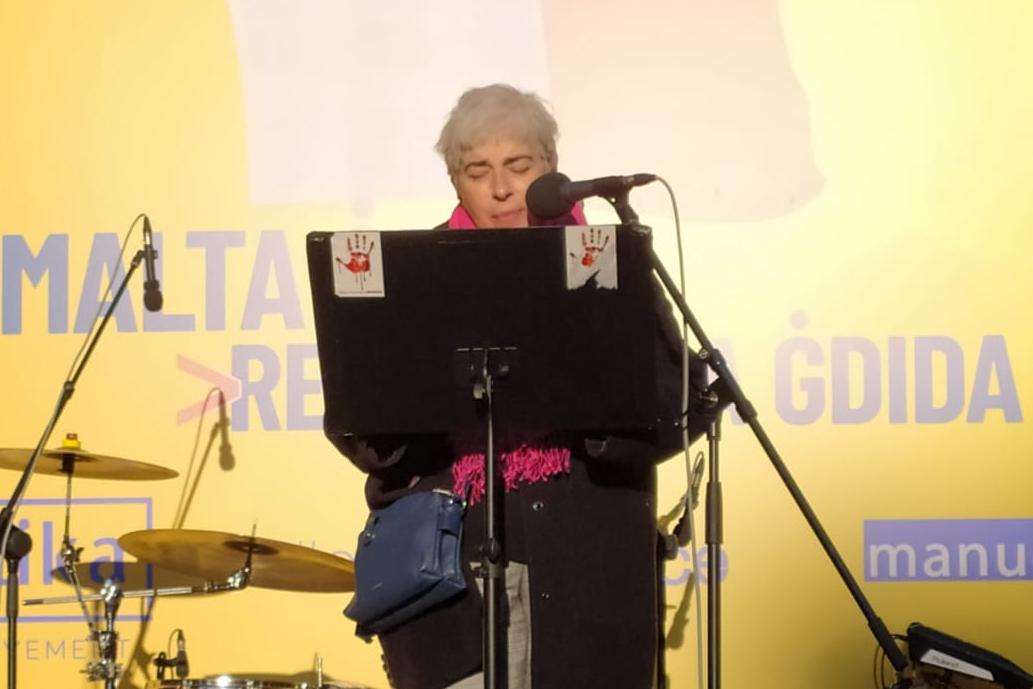 She hoped that politicians would henceforth work for their country, not their pockets.

Looking ahead to the appointment of a new Labour leader and prime minister, Prof Cremona said he would have the difficult task of pulling Malta out of the hole it had fallen into as a result of lies and corruption.

He needed to restore the country’s reputation abroad and confidence in itself.

He also needed to restore seriousness in the institutions, including parliament and the forces of law and order.

In line with the recommendations of the Venice Commission and the European Parliament he needed to ensure there was a separation of powers. 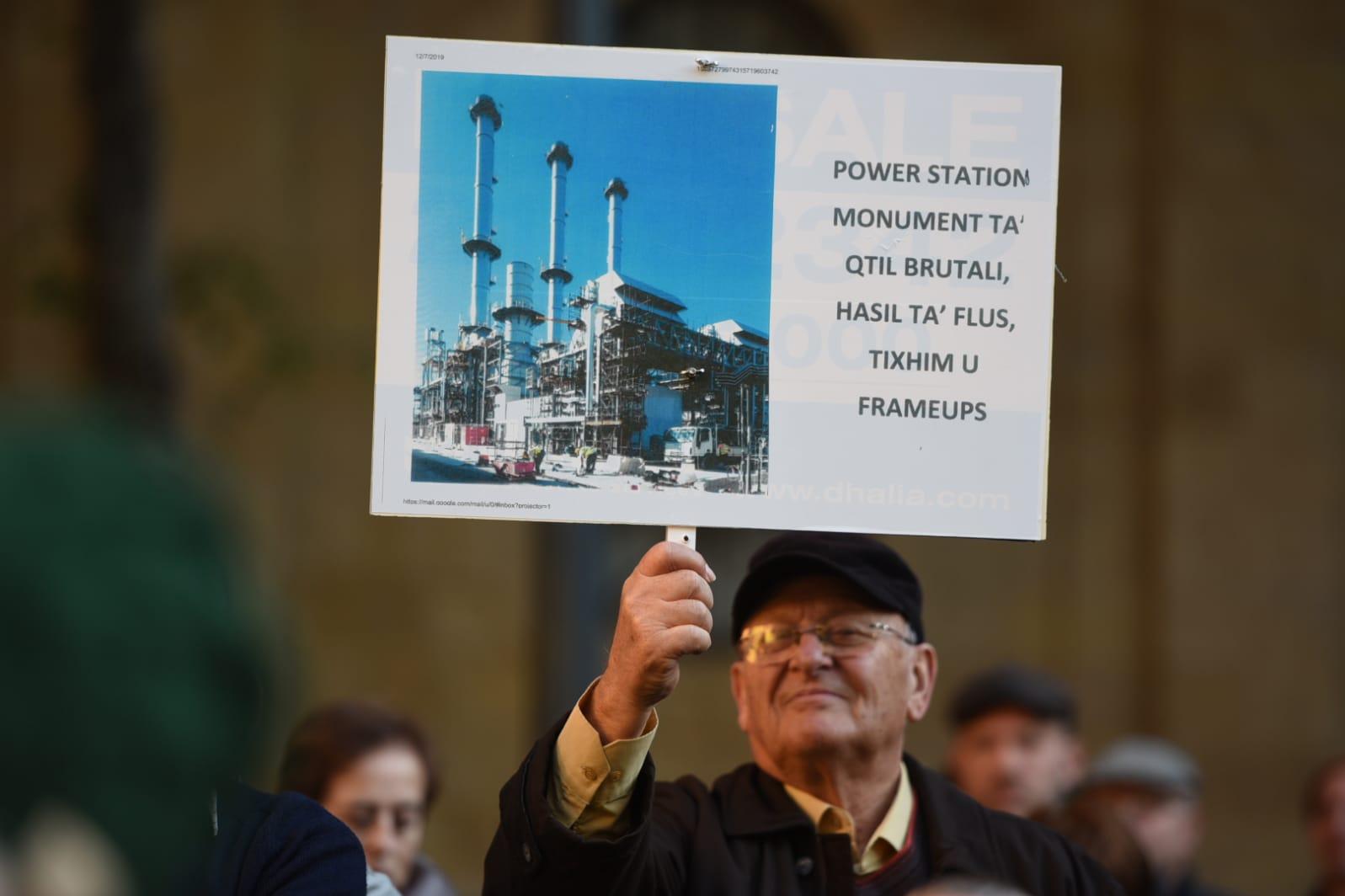 Prof Cremona said Repubblika had sent a series of questions to Labour leadership contenders Chris Fearne and Robert Abela, asking them, for example,  whether they would publish the government deals with Electrogas, Vitals and Steward Healthcare, whether they would order public inquiries into direct orders to companies in which politicians were involved, and if they would investigate the ownership of secret company Macbridge and the activities of accountant Brian Tonna at the Auberge de Castille.

No replies had been received.

Prof Cremona said Repubblika did not intend to become a political party, but it would continue to fight for the rule of law and against corruption.

It would continue to insist that the whole truth about the murder of Daphne Caruana Galizia must be revealed and that all corruption was investigated. In all cases, those responsible must be taken to court. The NGO would also fight for the environment.

“We have no intention of giving up our fight for truth and justice,” she said.

What the new prime minister needs to do

“The reason why is simple, the involvement of the Office of the Prime Minister in the plot is becoming clearer day by day, and then the prime minister has the audacity to tell us that he has paid the biggest price,” she said. 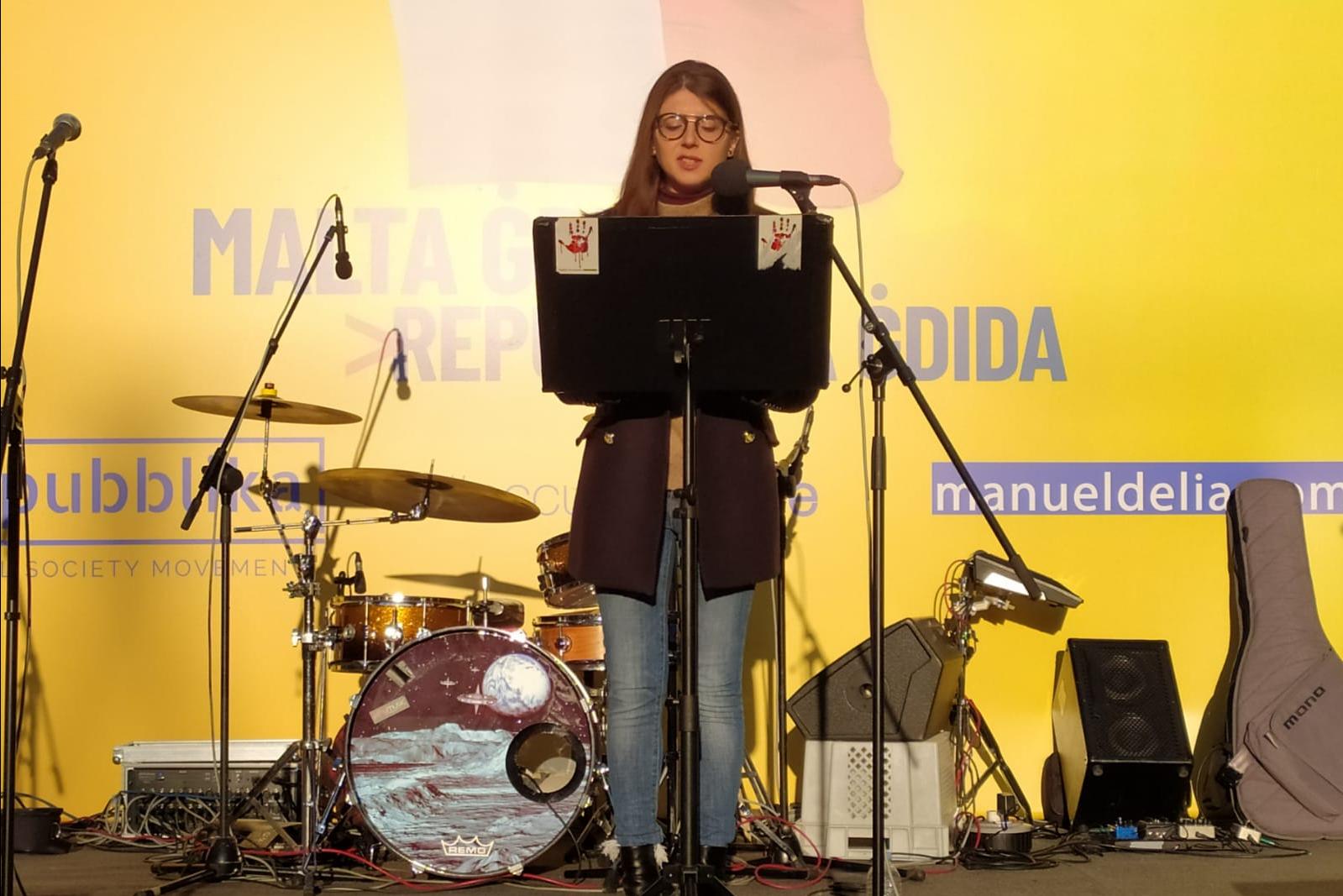 “In a few days we will have a new prime minister who has to find a way to quell the anger of thousands of people who have had enough of the reign of lies and criminality in our country.”

Ms Farrugia said that the new prime minister would do well to keep in mind that he would be the leader of all of Malta and not just the head of the Labour Party.
She said that the people could only be calm once justice was truly served. Justice meant that everyone complicit in attempts to cover up the assassination plot would see their day in court and face jail time. 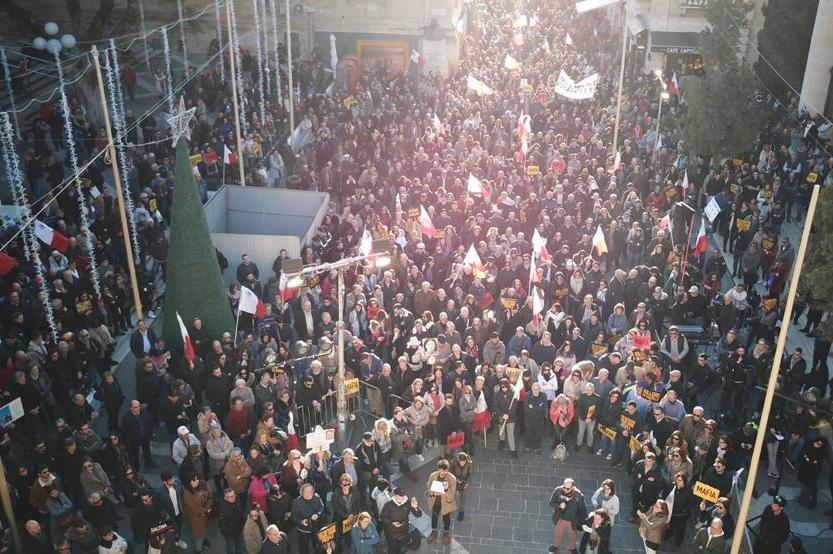 “There is a risk that despite promises from the (PL leadership) candidates, change will only remain superficial, Ms Farrugia said.

“That’s why we have an obligation to learn from our mistakes keep up the pressure on our political class so that they may learn once and for all that they answer to us and that we simply tolerate them and will not allow history to repeat itself.”

No plans for a new political party

Blogger Manuel Delia said Repubblika, Occupy Justice and his blog would continue to campaign and protest for as long as politicians continued to cover up each other’s wrongdoing.

He said that those who claimed that this movement would be turned into another political party simply did not understand what was going on.

“Going into the game of who wins and who loses would rob us the chance of building a new republic based on everyone’s welfare.” 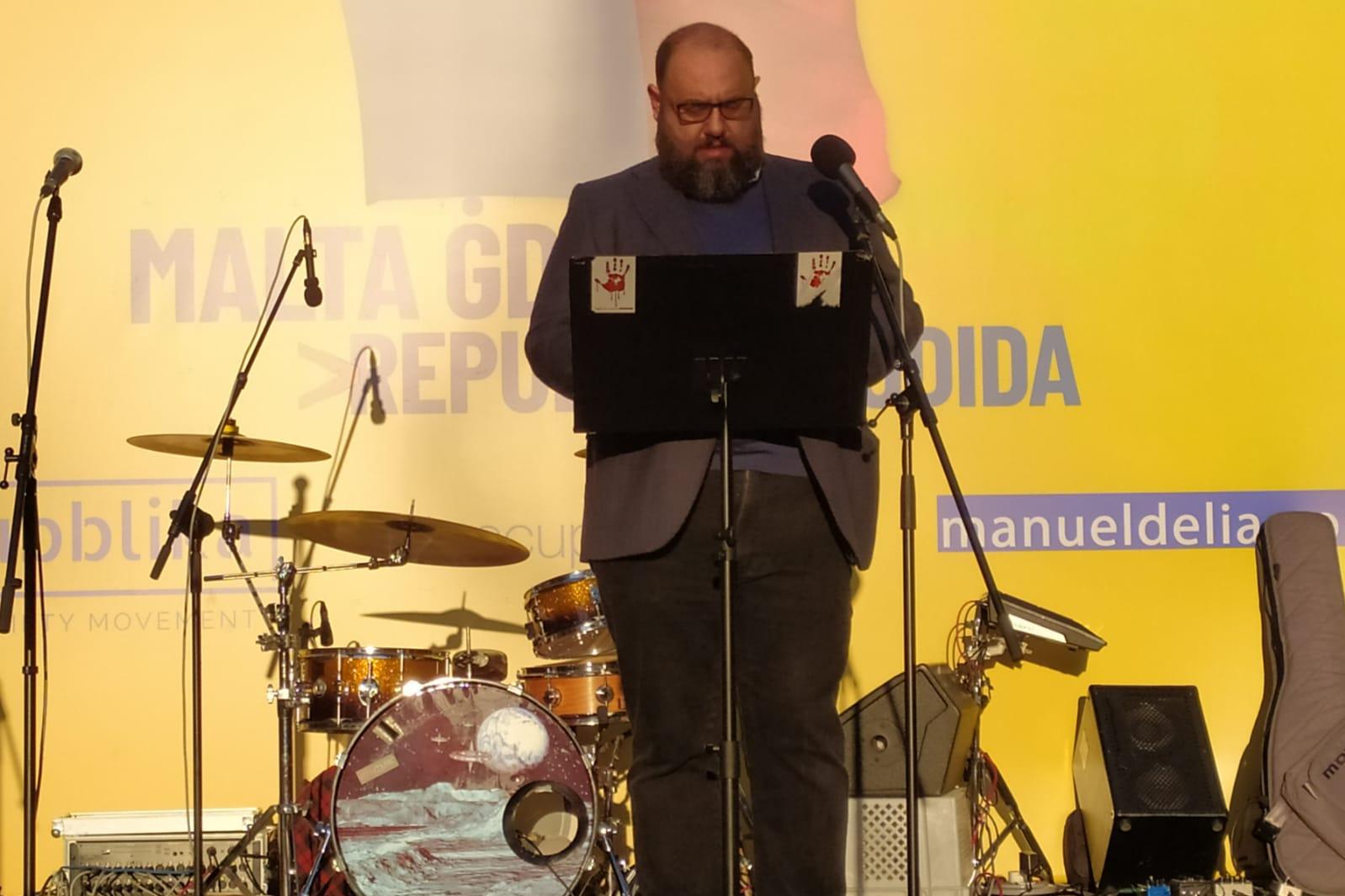 Manuel Delia speaking during the protest.

What this movement wanted was an end to corruption and the network of crime where even political loyalties were corrupt.

Mr Delia spoke of how Jason Micallef, the government-appointed head of the Valletta Cultural Agency, had ‘insulted and intimidated’ one of the artistes for having accepted to take part in the protest. (See video of Alexandra Alden taking part in the concert following the protest, below).

Such intimidation was serious since it amounted to state intimidation, he said.
Mr Micallef’s comments were a message for artistes to shut up or risk being punished. Yet their silence would be a loss to everybody else.

Mr Delia observed that the prime minister had said he would stay on for a month-and-a-half to handle the government’s everyday business. But he had since called on the Pope and been to Bethlehem, Dubai and London.

“We do not think it was the government’s day-to-day business which he was handling, but ways to ensure he had peace of mind once he leaves office.”
And while Dr Muscat was away, one of the two men seeking his post had refused to discuss his plans with the independent media.

He avoided any condemnation of corruption which he and his competitor in the leadership race had sustained for six years. The other promised a monopoly of power till eternity so that nothing would change. Then he said he was joking. 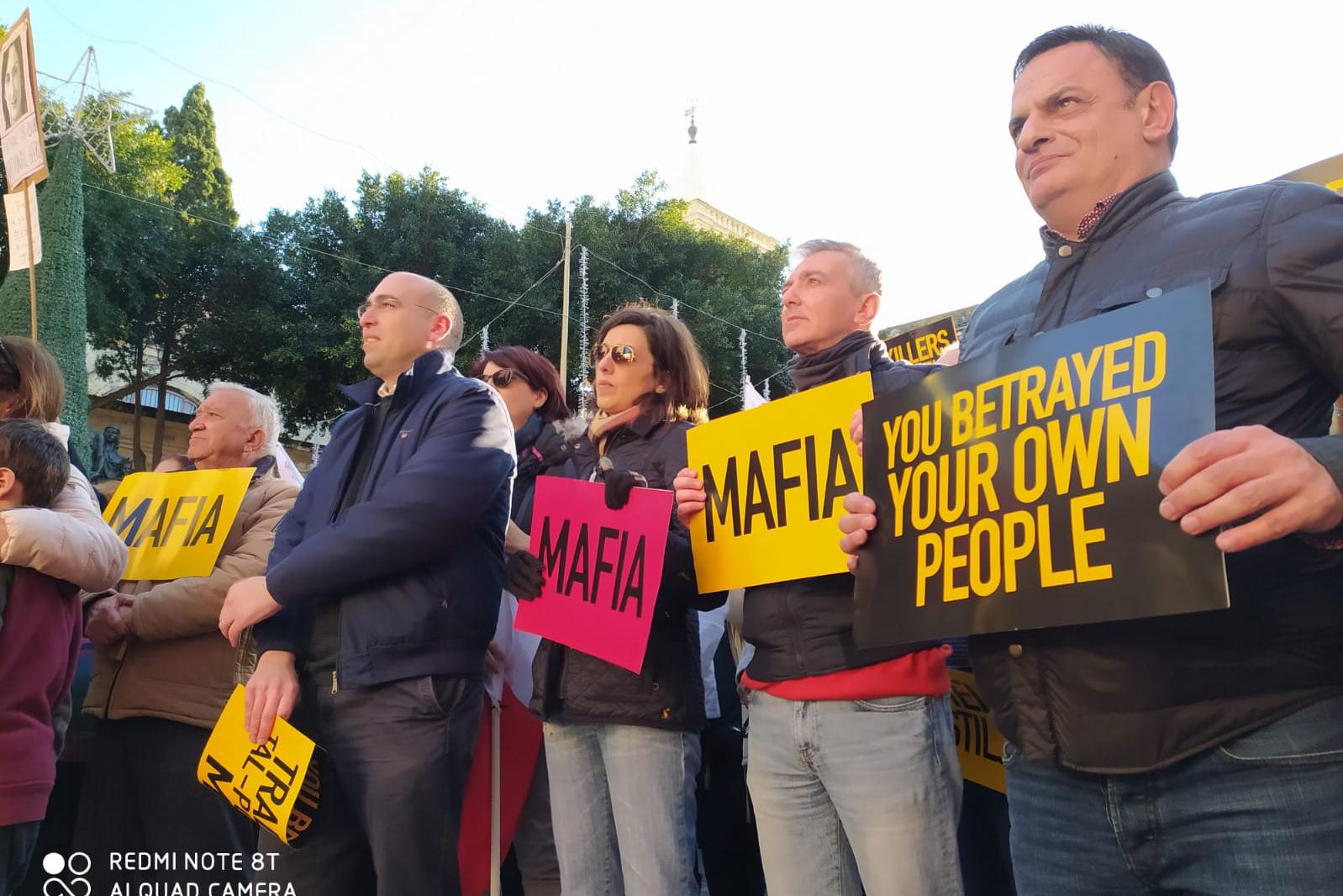 Former Opposition leader Simon Busuttil was among those present for the protest.

This, Mr Delia said, was unacceptable. This was no laughing matter when the country had been through so much which those two could have helped avoid.
Like Marie-Antoinette, the people had been told to eat cake. But neither Chris Fearne nor Robert Abela, or indeed any other political leader, could quench the people’s thirst for justice.

They did not need to be a political party to explain what Malta and its democracy needed. Democracy was not only about elections. Democracy was also served in the squares and the streets.

But it had to be a democracy for all, a ‘Malta Tagħna Lkoll’ Mr Delia said, borrowing Labour’s electoral slogan.

Alexandra Alden taking part in the concert following the protest.